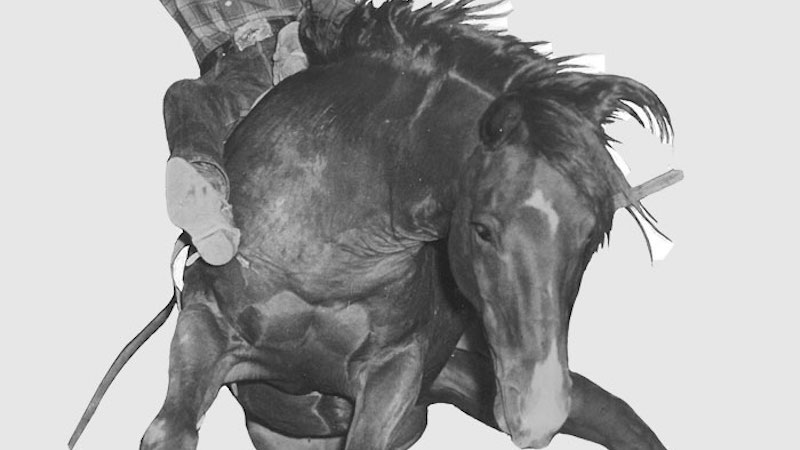 When the rodeo season is over, Casey heads for South Dakota to see his family and the old ranch, and to eat some of his mother’s prairie chicken pie and other favorite meals.

Casey finished the eighth grade when he was 13 years old and walked away to join the rodeo.

That first time he headed down the road with no more surplus baggage than chaps and spurs, walking 100 miles. Hitchhiking was easier than bothering with a horse when you knew you weren’t coming back.

But Casey got turned down by the rodeo bosses because he was too young. He went back home and rode the roughest broncs on his father’s ranch. He tried the rodeo again the next year and brought along a letter from his mother, (his dad wouldn’t sign) , giving consent for him to enter the tough contests. .

He’s been in all the big ones ever since–Cheyenne, Pendleton, Calgary, Madison Square Garden, and the Pikes Peak or Bust Rodeo. There isn’t a top rodeo in the country where he hasn’t walked off with big money. He rides in 80 to 85 rodeos a year.

Casey has had his close shaves with death. An injured shoulder failed to keep him out of the arena one night. Then, his horse slipped and fell, pinning Casey underneath. They rushed him unconscious co a hospital. A blood clot on the spine brought the orders six weeks in bed. But, Casey was out of the hospital in nine days.

He’s had broken bones in his foot, broken ankles, broken ribs. But, none of his injuries keep him out of the arena for long. In Lewiston, Idaho, one night, Casey got a broken rib, but he was back in the arena the next night and won the bronc riding contest.

“I want to quit while I still have my neck,” says Casey, realizing that rodeo has its hazards. Then, back to the subject of retiring, he says, “My writers have come up with a television show called Pony Express Rider that suits me fine. Making pictures won’t take up all my time. I want a place where I can go and call it home, where I can live and do the things I want to do. Maybe I’ll settle in the Black Hills, maybe in Colorado. I’ve won 26 beautiful saddles and I’d like to put them on my horses and let my friends ride with me.”

Speaking of a home of his own, Casey says he is still heart-whole and fancy-free, but his dream girl is a blonde. Oh, he’s dated plenty of brunettes and redheads, as he cruises cross-country in his Cadillac convertible but he’s partial to blondes.

“When it comes to real love, though, the color of her hair won’t matter,” Casey admits. “Only I’d like her to have all the glamour, curves, and charm of a Hollywood star. And, there’s one thing for sure, she can’t be a career girl. The girl I marry can’t go dashing off to some job or other, ‘cause I mean I’m goin’ to settle down.”