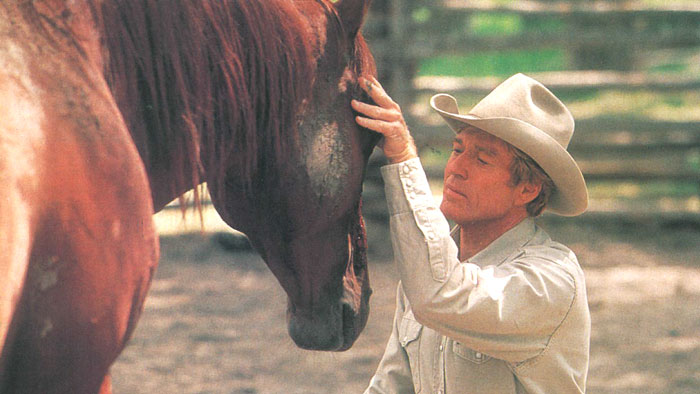 With that said, Rex gave me a personal demonstration. I stood next to him, and High Tower was about 10 feet away when Rex cued him to charge. Even though I trusted Rex, I instinctively jumped back when this 1,200-pound horse suddenly thundered toward us. But right on cue, High Tower stopped inches away from where I had been standing.

Because High Tower is so honest and responds instantly to cues, he was the horse Rex always used when Redford was between them. In other words, when Pilgrim was charging Redford, Rex stood behind Redford, off camera, cueing the horse. Rex trusted High Tower to stop before freight-training the star.

What’s really amazing is how quickly High Tower turns off his “anger.” After charging, attacking, or doing a biting scene, he stands calmly and quietly as if he’d been munching hay. Rex’s No.2 and 3 horses are not that way.

Says Rex: “It takes about 30 minutes for the No.2 horse (Cash) to turn it off and forget it. The No. 3 horse (Maverick) … well, a fight scene is no game with him. We have to be ultra-careful with him.” Both Cash and Maverick have racing Quarter Horse bloodlines.

Mike Boyle, Rex’s brother-in-law, was the head wrangler for the movie. He told me that shooting in the stall, in Connecticut where Pilgrim was confined after the accident, was extremely difficult. First of all, the horse playing Pilgrim bad to be very disinterested because he didn’t like people, he had no human friends, and he was in bad condition. He’s all to himself and doesn’t want anything to do with people or other horses. He stands off in a corner until feed is thrown into the stall. Then he has to come up like a wild horse.”

Shooting a fight scene in that stall was complicated because the stall was so tight and because the horse had to express just the right attitude, then charge. Added Mike, ” It took days to get it, then we had to reshoot due to some lighting problems. So we brought the ‘detention stall’ to Montana to set up and do it all over again. We finally got a great fighting scene.”

Incidentally, Mike’s wife (Rex’s sister), Shelley, is a stunt rider who played the role of Judith, riding Justin, in the accident

Another equine star not mentioned yet is Buck Brannaman ‘s Rambo, who plays the role of Rimrock, Tom Booker’s No. 1 horse. Rambo, registered with the AQHA as Rambo Roman, is by True Roman, a descendant of Fair Truckle (TB). Buck has owned the 10-year-old Rambo for 5 years. Buck first saw the bay when he was brought to one of Buck’s clinics as a 3-year-old for starting under saddle.

Buck’s wife, Mary, describes Rambo as being extremely sensitive to the rider, operating off featherlight cues. But Mary added that Rambo seems to adjust to other riders less skilled than Buck. That includes most of the rest of us.

One of Buck’s colleagues and protégés, Curt Pate of Helena, Mont., served as assistant technical advisor. His wife, Tammy, also had a bit part as one of the ropers in the branding scene.