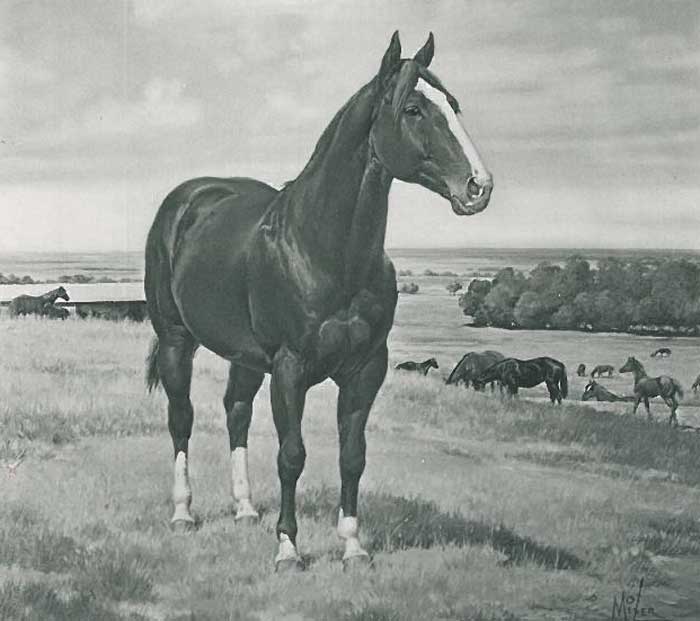 A look back at one of the all-time great sires.

Pictured is Orren Mixer’s well-known painting of Leo that was on the cover of the September 1951 cover of Western Horseman.

It is not known just where Leo, the No. 1 stallion on the L.A. (Bud) Warren Quarter Horse Breeding Farm near Perry, Okla., got his name. However, nobody – man or beast – could show more lion-hearted courage, or rise above more adverse circumstances to write his name in the Halls of Fame than this Quarter Horse sprinter, the mighty Leo.

Leo was foaled in 1940 by Joe Reed II out of Little Fanny, both owned by John Wesley House, a veteran horseman of Cameron, Texas. From the very beginning, Leo showed evidence of the royal blood of a great racing family: beautiful head, heavily muscled shoulders, a great stallion with versatile performance and terrific speed.

Leo was 17 months old when he was spotted at Eagle Pass, Tex., and purchased by John Tillman of Pawhuska, Oklahoma. During the next few years, he built up a reputation that couldn’t be matched, winning 20 out of 22 races with all sorts of imposed handicaps.

However, with profitable races at a premium in the Pawhuska area, Leo was returned to Eagle Pass and sold to E.M. Salinas, who in turn leased him out for racing in Old Mexico.

When he was being returned to the States, he suffered the first serious mishap that cost him any further racing fame and almost cost him his life. The trailer in which he was being hauled turned over and his front legs were nearly sheared off. Viewed in the light of the mark he has since made in the realm of Quarter Horsedom, it proved a miracle that he was not destroyed at this time to end his suffering.

However, the Fates that watch over dumb beasts were opening up a place of further usefulness for Leo. W.C. Rowe, an Osage County, Okla., rancher – familiar with Leo’s racing record during his stay in the Pawhuska area decided to buy the broken-down sprinter to serve his string of running mares. And so it happened that Leo made a second advent into the Osage country, not as the best bet on any race track, but as head man on a breeding farm. 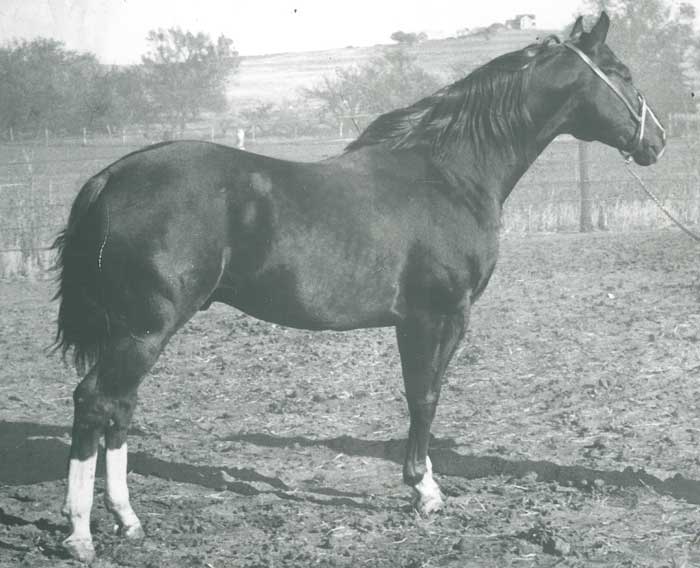 Things were looking up for Leo until Rowe sold his ranch in Oklahoma and moved his operations to New Mexico. The stallion made the trip in a makeshift stall in a railroad car, most of which was filled with household goods.

Somewhere enroute, this car, with Leo sandwiched between bedsprings and other household fixtures, was lost and long overdue at its destination. When it was finally found and the door of the box car was opened, there stood the lion-hearted Leo with his head thrust through the bedsprings and practically covered by other articles that had been thrown into his stall as the car was shunted around in various railway terminals.

It was a badly bruised, hungry, and thirsty stallion that was rescued from the debris; and for a second time it took tenderness and skill to nurse him back to health and usefulness.

Rowe soon found, however, that his new operations in New Mexico lacked suitable facilities for handling the stallion, so he sent Leo back to his friend Gene Moore in the Indian country. But bad luck was not ready to release its hold on the valiant Leo, and he received yet another severe injury. This time it was a breeding accident, and it was feared that his usefulness even as a stallion had come to an end. His short life of only seven years had been equally mixed with brilliant fame and grave disaster.

But at long last Fate was ready to smile again, this time dispersing the dark cloud of misfortune that had hovered so persistently over the mighty Leo.

The famed Leo, owned by L.A. Warren of Perry, Oklahoma. Photo by Orren MixerIn 1947, Bud Warren, who had been more or less playing around in the horse business for a number of years, decided to purchase the ailing stallion from Gene Moore. Leading horsemen called Warren the “biggest chump in horse business” when he paid $2,500 for a horse so badly crippled that his owner had considered destroying him.

However, Bud Warren knew what he was doing; and thus was begun the Leo-Warren partnership that has paid such big dividends to both partners. Together, they have blazed a trail unsurpassed in the annals of the American Quarter Horse industry; and, although Leo is past 20 years of age, he is still the No. 1 stallion on the Warren Quarter Horse Breeding Farm, and the current breeding fee is $2,500.

Prior to breeding seasons, it appears that all roads throughout Oklahoma lead to the Warren farm. Leo the Great has had more than 400 sons and daughters registered with the American Quarter Horse Association. His daughter Mona Leta set the present world’s record for 2-year-olds in the time of 12.2 for 220 yards. This record was established at Garfield Downs in Enid, Oklahoma. And Oleo, carrying on both the name and the prestige of her famous sire, still holds the world’s championship for 2-year-olds at 300 yards in 15.8. This coveted all-time record was made at Raton in the year 1953 .

Oklahoma’s largest Quarter Horse show to date was held at Stillwater in 1961. At that time, the winner of the aged stallion class and reserve champion stallion was Leovada, a AAA running horse which has more than held his own in show ring competition. Leovada was foaled by Leo out of Lena Horn, bred and raised on the Warren farm. He was purchased as a 2-year-old by Mrs. Darrell King of Fallon, Nevada. The “Leo of Nevada” became Leovada.

Thus have the progeny of the mighty Leo fanned the flame of his glory.

However, Warren realized that old Father Time would eventually call a halt on Leo’s days of usefulness; so he began to look around and plan for his successor on the breeding farm.

He remembered Randle’s Lady, one of the finest of all oldtime running mares, and one of the only two competitors that was ever good enough to outrun Leo in an open race. Randle’s Lady was an aged mare with her racing days behind her when Bud Warren purchased the regal old dame, hoping to raise a stud horse out of her. It was by Leo, out of Randle’s Lady, that Croton Oil was foaled in 1955.

Croton Oil is a bit rangier than his famous sire, but he has the same beautiful head and the same rippling muscle; in exactly the right places. 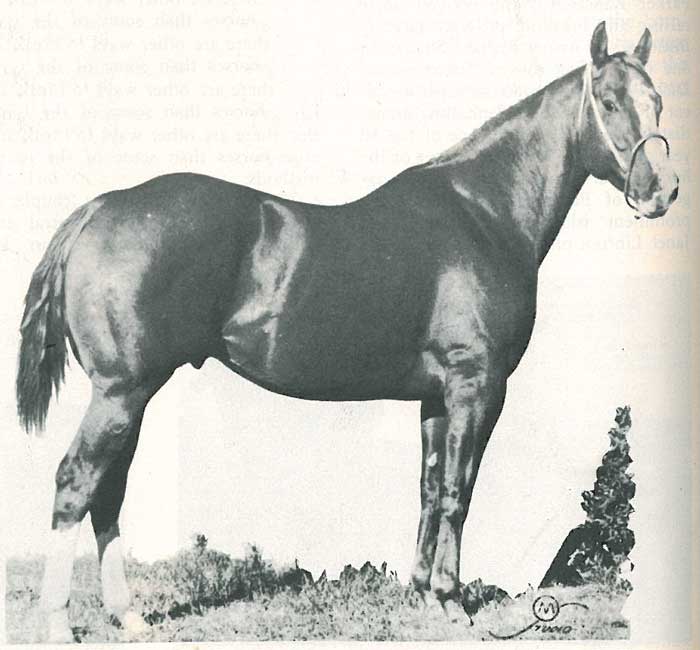 Leo’s son Croton Oil, which will toke over when Leo is retired. Photo by Orren Mixer

Just when he will take over the place of first man on the breeding farm is not known. With reasonable expectation, Leo may be adding yet other famous names to his long line of progeny.

However, his successor is ready to take over when the lion-hearted Leo steps into the pleasant pasture down the hill from the stud lots where he can savor the tender green grasses, relax in the shade of the wide-spreading trees, and dream of his own brilliant accomplishments and those of his worthy offspring.