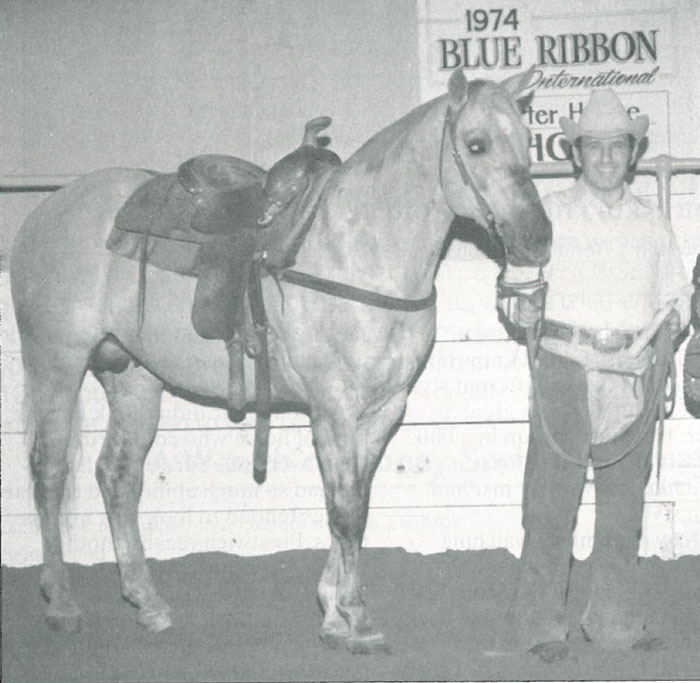 “He never took a lame step in the 20 years that I owned him,” noted Greenberg. “He never had a cold. He never even threw a shoe.”

Even so, Richard was lucky he didn’t kill Hollywood Jac. One day, after leaving the Gold Coast Circuit, Greenberg’s horse trailer came unhitched on a Florida interstate. He had forgotten to lock down the ball. The trailer did a double flip.

“We thought for sure the horses were dead,” said Greenberg. “We had to get a fire truck and a welder to cut the trailer apart to get the horses out. The other horse, who was a big hunter jumper, was laying on top of Jac. We had to sedate him because he was thrashing around, but we didn’t give Jac anything. Finally, after about an hour, we got them out. When we pulled Jac out of the trailer, he got up, shook his head, walked over to the side of the road, and started eating grass.

“About an hour later my friend Dr. Tim Bartlett came along. He had an empty slot in his trailer and Jac jumped right in like nothing had happened. Tim brought him home for me,” Greenberg said incredulously.

The near-tragedy illustrates the take-it-in-stride disposition that Hollywood Jac 86 was noted for. It is also a hallmark of his get.

Despite Richard’s initial lack of horse experience, he and Hollywood Jac did become a fabulous team- once Jac straightened Greenberg out about a few things.

“The first time I went to a reining by myself with Jac, I was getting ready to walk into the pen. At that time I was just beginning to rein and I knew a lot less than I thought I knew,” Greenberg confided. “So I reached up with my spur and poked Jac in the shoulder to get him to lighten up and turn around faster. Jac turned around and bit my toe,” he laughed. “That was the last time I ever rode Hollywood Jac with a pair of spurs.

“He had a tremendous amount of feel,” Greenberg added. “He was a very easy horse to ride. He had an incredible combination of power and sensitivity. Yet you could put little kids on Jac and they couldn’t even get him to trot.” 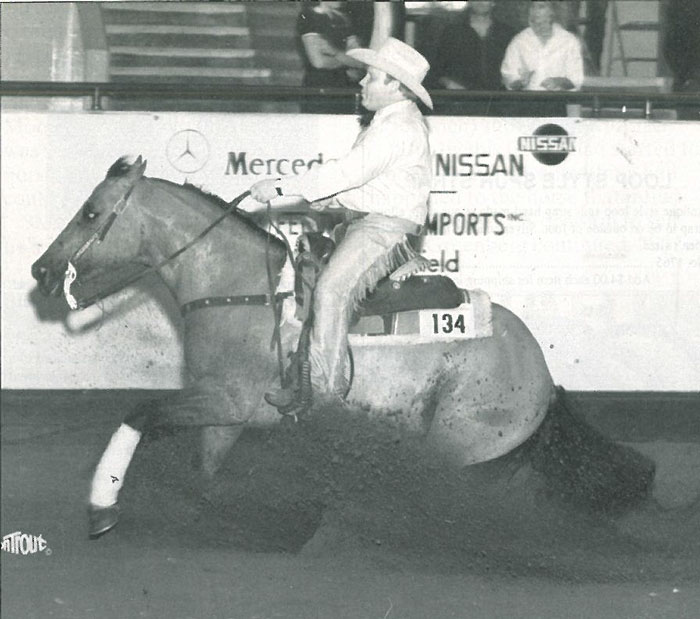 Tim McQuay is credited with proving that the Hollywood Jacs were good open horses, as well as non-pro mounts. Here he’s on Mr Boggie Jac, a son of Hollywood Jac and out of Boggie’s Last, who was the 1984 NRHA Derby Non-Pro Champion and the 1985 NRHA Open Reserve World Champion. Photo by Don Trout, courtesy of McQuay StablesRichard’s respect and affection for Hollywood Jac paid big dividends. Greenberg won 12 NRHA bronze trophies riding Jac and earned 2 NRHA non-pro world champion titles, one in 1974 and another in 1975. Greenberg retired Jac from the show ring with NRHA earnings of $6,089.

Appropriately, one of Hollywood Jac’s biggest fans, Tim McQuay, judged the stallion the last time Greenberg ever showed him. It was at a jackpot reining at trainer Ken Eppers’ place in Grayslake, Illinois.

“I remember it vividly,” said McQuay. “He ran like he was going to win it that day. He was great, but he set up going to the last stop, so I placed him second.”

Spain Prestwich showed Jac to his AQHA Superior award before turning over the reins to Greenberg in 1972. Jac earned 72 AQHA reining points. One of Prestwich ‘s favorite stories about Jac is the time he showed him for Richard at a Quarter Horse show in Northbrook, Illinois. When Prestwich arrived, he unloaded the horse and noticed that Jac’s sliding plates had broken in two. He tried to find a shoer. No luck. So Prestwich went to the nearby Libertyville Saddle Shop, bought some tools, and pulled Jac’s shoes.

“I’d hauled him 400 miles so I thought, I’m just going to show him anyway. So I rode him barefoot and won the reining. He beat the horse that was leading the nation,” Prestwich recalled gleefully.

If you are interested in reading more about Hollywood Jac 86 and other great, “Legendary,” horses, we invite you to read through Western Horseman’s Legends: Volume 3. It provides exclusive detailed profiles, photographs, pedigrees and performance summaries of the horses that played significant key roles in the Quarter Horse industry.