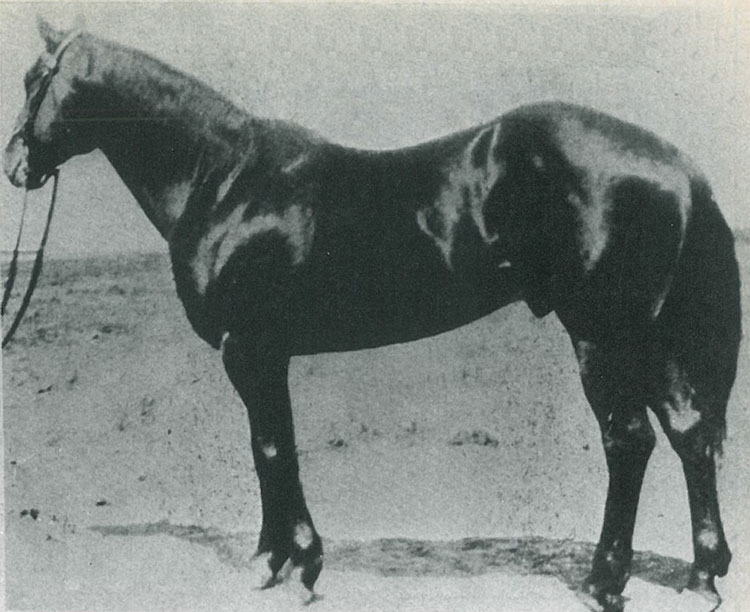 Joe Hancock is listed by the Jockey Club in The American Stud Book (Volume 14, page 506) as Brown Wool. His birthdate was given as 1925, and his dam’s name as Maggy Murphy. He had a couple of good years on the organized tracks, but as he matured he looked less and less like a clean-bred Thoroughbred.

After Joe retired, he still ran a few match races when they could be arranged. He would no doubt have vanished into the obscurity that surrounds old race horses had he not caught the eye of one of the best horsemen of his time, Tom Burnett of the 6666s. Tom enjoyed a short race, and prided himself on always having a top sprinter. When one of his best race horses lost a quarter-mile race in Oklahoma to Joe Hancock, he promptly bought the horse and had him taken to his Triangle Ranch. He ran Joe a few times and then began using him as a sire.

Tom Burnett was an interesting individual any way you looked at him. The Burnett family were outstanding cattlemen. Their only close rival was the neighboring Waggoners, who branded the reversed three D’s. The Osage Reservation in Oklahoma had provided cheap grass for the Burnett livestock, and the family did well financially. They sank much of their money into Texas land, knowing their Oklahoma grass would not last. They also leased an additional 300,000 acres from the Kiowas and Comanches. Quanah Parker was a personal friend, and that eased the Indian problem. When oil was discovered, they found that their ranches were right on top of the oil. The boom town of Burkburnett, Tex., was named for them.

Tom spent most of his years in Iowa Park, Tex., and his daughter, Anne, married J. Goodwin Hall, commonly known as Jim. Jim was active in the organization of the American Quarter Horse Association, and became its first treasurer. The Burnetts have continued to support the AQHA. Anne and Jim’s only daughter, also named Anne, is today an honorary vice president of the association.

Jim Hall’s interest in the Quarter Horse began with his marriage to Anne Burnett. He was especially partial to Joe Hancock and a stud named Tom, the main stallion of the Burnetts until Joe Hancock arrived. Tom was a grandson of Peter McCue, as he was sired by Midnight. When we registered the Burnett horses, Jim helped select about 50 mares and stallions for entry into the registry. Jim also organized the Quarter Horse Camp Meeting Association, the first of many organizations to spin off the American Quarter Horse Association. It was designed to promote races for those interested in running their horses. Their best race meets were held in Eagle Pass, where Helen Michaelis was the motivating force.

But back to Joe Hancock. Since I have been somewhat disparaging of Joe Hancock, one might wonder why and how I registered him. As secretary of the newly formed AQHA, that was my job. Here is how I entered him in Volume 1, Number 1 of the Official Studbook and Registry of the American Quarter Horse Association:

When Helen Michaelis became secretary, she changed Joe Hancock’s registration, leaving out all reference to his cold-blooded ancestors. I had enough evidence about Joe’s dam so I could have left out the “it is said” part of his entry. However, as we were just starting a breed association, his exact breeding was of little actual importance. To continue with Helen’s feelings about Joe Hancock, she wrote me as follows in the 1950s:

“Some have said Joe Hancock was a freak. Had he been a freak or sport he would not have been such a strong breeder of outstanding Quarter Horses . . . whether one admires draft blood in his Quarter Horses or not, Joe Hancock’s descendants look a lot more like Quarter Horses than some fifteen-sixteenths Thoroughbreds of today who have been registered.”

So far I have only touched lightly on Joe Hancock’s conformation and characteristics. Joe stood a little over 16 hands, had prominent withers, a straight shoulder, and a straight hind leg. He was a bit too long in the back for me. I like a close-coupled horse. Except for some white on his face, he was dark brown, so dark many people called him a black. He was considerably larger than we wanted our Quarter Horses to be, but he was well balanced. His grandsire, Peter McCue, was also large-16.2 and 1,430 pounds. Tom Burnett thought he was one of the greatest Quarter Horses that ever lived and he saw that Joe got his share of good mares.

Joe Hancock’s breeder was undoubtedly Walter E. Hancock of Perryton, Oklahoma. He also owned a Peter McCue stallion he called John Wilkins, after the noted short-horse man of San Antonio. The only colt of note by John Wilkins was Joe Hancock, as far as I know. Joe was foaled in 1923 or 1924, depending on whom you wish to believe. I looked at his teeth in 1938, but they were so well used I could not tell within several years.

Soon after the AQHA was established, Jim Minnick and I drove by the Triangle Ranch to see Joe Hancock. From Cottle County, where the Triangle is located, we drove on across the state line to Perryton to see and talk to Walter Hancock and John Ogle. John Ogle trained and raced Joe until he was purchased by. Tom Burnett. Tom could not wait to run Joe against a fast horse the Waggoners owned. The race was matched to be run on Waggoners’ track located on the Three D’s. Joe Hancock won so handily that the jockey riding the Three D horse could not have thrown a rock far enough to hit Joe as he crossed the finish line. Joe was timed by both camps at 22 ¾ seconds for the standing-start quarter mile.

Read the “History behind the American Quarter Horse Association”