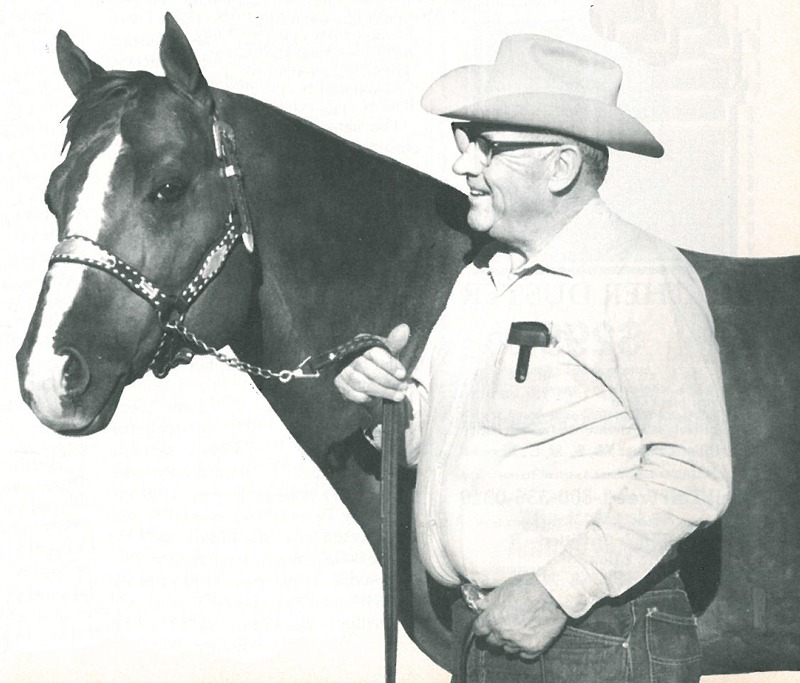 This stallion became one of the greatest sires in Quarter Horse history.

It was cold and blustery the afternoon of March 22, 1961, in Illinois. Mother Nature couldn’t decide if she were dancing to the tune of late winter or early spring.

Herman H. Mass and several other fellows had taken refuge against the biting wind. They were inside the farm manager’s house gathered ’round a table playing cards. A new hand had just been dealt when Mass glanced at the time. It was his turn to check on a mare by the name of Triangle Tookie. She was in the barn and heavy in foal, due any minute.

Mass turned his cards face down and laid them on the table in front of his chair. He grabbed his hat and coat and jumped in his car to drive down for his check. He returned a few minutes later looking like a pleased man. He took off his hat and coat, sat down, picked up his cards, fanned out his hand, and grinned.

“Well,” he said, “it looks to me as if I have a two-eyed jack out in the barn.” All heads swiveled toward Mass. “What?” queried his farm manager. “Did Tookie have her baby? How does he look?” Still looking at his cards-which included two jacks-Mass kept grinning and said, “He looks like a perfect little horse.”

Melinda Mass Tidmore, Herman’s daughter, still remembers that afternoon of 30 years ago. “Jack was about 20 minutes old the first time I saw him;’ she recalled, “and Dad was right. He was little, like a baby, but he still looked like a perfectly mature horse. It was incredible.”

Two Eyed Jack has been heralded as one of the most influential of contemporary Quarter Horse sires. As a matter of fact, there are some people who refer to the “Two Eyed Jack Era.”

The sorrel stallion was bred during a time when the lines of pedigree demarcation weren’t drawn as rigidly as they are today between halter, performance, and racing. Jack was by Two D Two, a 1957 stallion by Double Diamond (a 1947 stallion with race ROM) arid out of Double Life by Pay Day. Double Diamond traces to Silver King/Old Sorrel on the top and to Scar Face S/Bailey on the bottom. Scar Face S was out of a mare by Midnight, who, in turn, produced the famed Midnight Jr., who did more than his share to launch racing veteran Walter Merrick. Pay Day, the sire of Double Life, was by Joe Moore and out of Paulita.

The dam of Grey Badger III was a Thoroughbred named Mary Greenock by Greenock and out of That’s Mine.

On the bottom of Triangle Tookie was Lady Hancock. She was by Roan Hancock, who excelled both on the racetrack and in the arena. Her dam was Triangle Lady 10. As a result of all this, Two Eyed Jack reflects nine crosses to Peter McCue in the first eight generations of his pedigree. He also had a five by five cross to Midnight. (That means he was intensely inbred.)