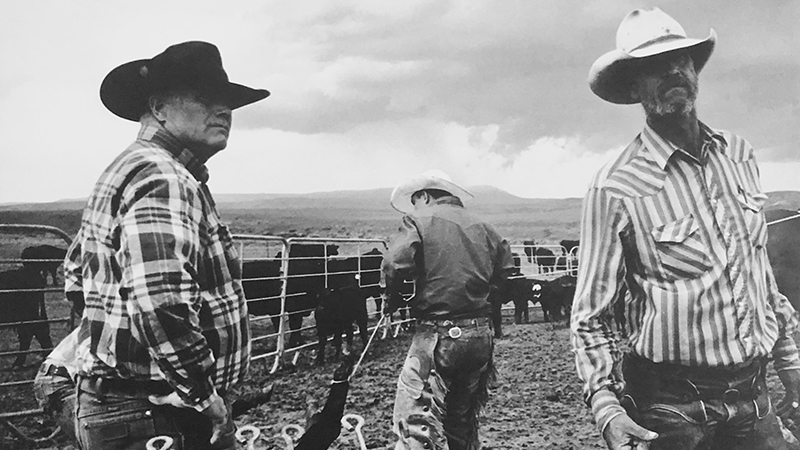 In this coffee-table book, Texas photographer John Langmore takes readers to 14 of the largest ranches in the West and depicts the daily lives of those who live and work there.

“By definition, big outfits exist far from the places most Americans choose to live. Only in such remote places can anyone afford to own or lease several hundred thousand acres. Despite being a cloistered existence, cowboying is actually one of the easier professions to enter. The right amount of determination and about $2,000 worth of gear (if bought used) are the only requirements. No degrees or even former experience are needed. I had landed a job on one of the toughest outfits in the West as a twelve-year-old with only a week’s worth of riding lessons to qualify me.” –Excerpt from Open Range: America’s Big-Outfit Cowboy

In 1973, photographer Bank Langmore set out on an assignment to photograph cowboys working on remote ranches throughout the West. He was one of the first photographers to ride along with the cowboys on these ranches and photograph them in their natural environment. His images were published in the book The Cowboy, released in 1975, and reaffirmed that the ranching culture is alive and the American cowboy still exists, but you won’t see him from the highway. The book inspired a generation of men to go west and learn cowboy ways.

Fast forward to 2012, and Bank’s son, John Langmore, embarked on a similar project, not to retrace his father’s tracks, but rather to pick up where his father left off. In four years, he visited more than a dozen big outfits from Texas to Montana and Nebraska to Oregon, some of which he had cowboyed on himself as a teenager. Langmore defines a “big outfit” as one that operates on several hundred thousand to a million or more acres, runs 3,000 to 10,000 mother cows, and hires a crew of “itinerant” cowboys.

He spent weeks at a time on the ranches, participating in seasonal works and gathering stories and images for his book, which was released in the fall of 2018. To Langmore, the project wasn’t about making money or romanticizing the cowboy West. It was a way to push photographic boundaries, share the faces of hard-working men, women and children as they continue to cultivate and preserve traditions in their everyday work and lives. It also reconnected him to his past, and he discovered that while technology and trailers have made some ranch work more efficient, most things have stayed the same.

The oversized coffee-table book is a stunning yet realistic portrayal of ranch life with 90 large black-and-white photographs spread throughout most of the 144-page book. The design is clean, and the captions list only the name of the ranch, location and the year the photograph was taken. That allows the photos to stand on their own and tell the story. At the back of the book, however, Langmore writes about the ranches and his experiences and observations.

“Looking back, I now appreciate how inevitable it was that my growing passion for photography would eventually connect with my dormant affinity for the American Cowboy, just as it had for my father,” he writes. “… Pursuing this project was my attempt to carry forward a photographic tradition expertly executed by my father and the other great western photographers I admire, such as L. A. Huffman, Erwin Smith, Charles Belden, William Albert Allard, Jay Dusard and Kurt Markus. It was also an excuse to return to that formative and beloved time of my youth. And it was a chance to discover whether the way of life I once knew so well had, at the hand of technology and fences, suffered the passing so frequently foretold.”

In the conclusion, Langmore writes, ‘Long may you live, Cowboy!’ was the last sentence my father wrote in his book. Forty years later, as I put down my own pen, I take great comfort knowing his wish was granted.”

Langmore’s artistic eye, vision and passion for this project will touch the hearts and souls of those who live the ranching lifestyle, but also those who long to taste the grit in the air during a dusty cattle drive, feel frozen fingers and toes while breaking ice and calving in a blizzard, hear the rumble of the remuda as it runs into the corral at dawn, smell the sweetness of the sagebrush after a rain, and see the vastness of the Western landscape dotted with grazing cattle. Open Range is a tribute to those who painstakingly preserve a lifestyle and hand down traditions that few can only imagine.