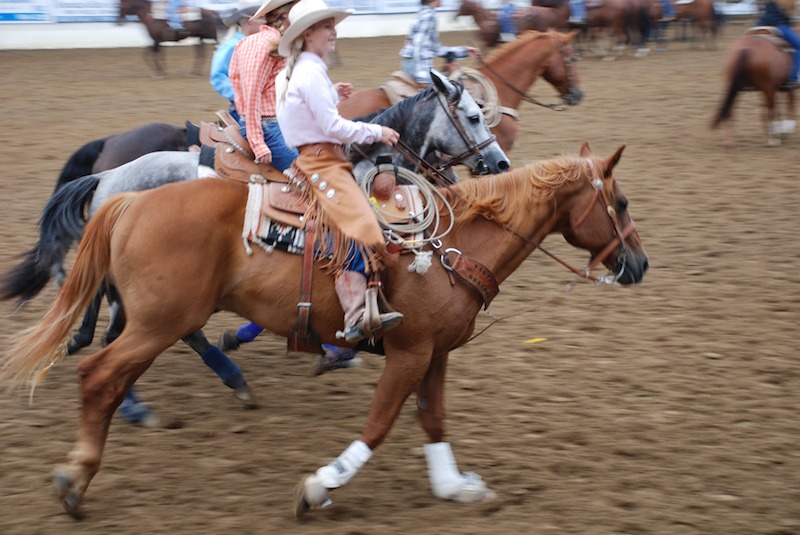 In Praise of a Little Seasoning

Historically, we value the stories handed down by the Viejo, the old ones, in the West. It would seem only fitting then, to also value those who have served within those stories. Those skilled, aged horses that served the cowboys and stockmen so willingly, so skillfully, for so many years.

The great Montana writer, William Kittredge, summed up his view of older—let’s call them “seasoned” Westerners—in his essay, “Running Horses.”

“They were our nobility,” he wrote. “I think they dreamed of capabilities and beauty. They knew better than to imagine you could own anything beyond a coherent self.”

I believe this same humility and understanding can be applied to the steady nature of solid, aged saddle horses. And it brings to mind the memory of an older sorrel gelding a friend of mine owned and passed through this family’s lives.

Whenever my friend’s daughter would go into the gelding’s pasture to catch him, the old boy would stand soldier–still. She would reach up and hug his neck as he dropped his head so she could slip the rope halter on him. When she would start back for the gate, he’d walk right out with her at a good walk, staying at her side, not pulling ahead or dragging behind her. I remember them at gatherings. Together, standing in the circle with the other riders, ready to move out for the long-trot to the morning’s work.

Some of the other horses were much younger and had some difficulty standing still, what with all the people and horses and the excitement they were starting to feel. That little gelding stood rock-solid; ears forward and ready for the day.

That branding season would mark the gelding’s 24th year, and while he was older than most of the horses there, he wasn’t old, just a little more “seasoned.” And the little girl riding him wouldn’t want any other horse under her. Neither would my friend, her father, sitting two horses away.

That gelding had been through three of his kids. One boy had shown him in local 4-H and FFA competitions—hauling him all over the West. His other son had taken him through four years of high-school rodeo and an endless number of weekend team ropings—not to mention the countless gatherings and brandings on their ranch and on neighbors’ places.
That day, the little 24-year-young gelding—a sorrel, grade horse with no papers or fancy registration to his name —carried a 10-year-old girl into a new chapter of Western adventures for both of them.

“I wish I had a pasture full of horses like him,” her father told me. “That’s a horse I could put anybody on and never worry.” He smiled, looking over at her, “Now I can’t get her off of him. He doesn’t seem to mind though. Just hope he lasts.”

That’s not an unusual story, really, even though for many, older horses can be looked on sometimes like an older car—after three, four or five years some sell and get a new one. For years, young horses have been raced and been in competitions where 3-year-olds are considered experienced, in many cases finished with “showing” careers. To their credit many of these young horses are capable of taking all that fast training and use in those early formative years and go on to other lives as great competitive, pleasure or family horses. Some make it, many don’t.

Today, we see more horses being used and even celebrated for their skills and “life experience” late into their teens and even into their twenties. Maybe this newfound respect for one’s “elders” is coming from the growth of organized and sanctioned ranch ropings and similar ranch-oriented contests. Competitions that feature ranch horses—not show horses—doing ranch-oriented work such as sorting and doctoring events that allow quiet, seasoned skills to be shown—where slow is fast, with competency outweighing everything else.

It is in the union of such work where the work becomes a dance making the two barely discernible from each other. Esteemed writer Thomas McGuane wrote, “…some enchanted transformation through which the horse and rider become a third much greater thing.” If it had to be put into one word, it would be trust—a relationship that only comes with time.

Historically, we value the stories handed down by the Viejo, the old ones, in the West. It would seem only fitting then, to also value those who have served within those stories. Those skilled, aged horses that served the cowboys and stockmen so willingly, so skillfully, for so many years. Most are valued. The lucky ones are treasured. Like the little sorrel gelding trotting off with a precious cargo, showing a 10-year-old cowgirl the wonders of the West. Riding another circle, starting another story.