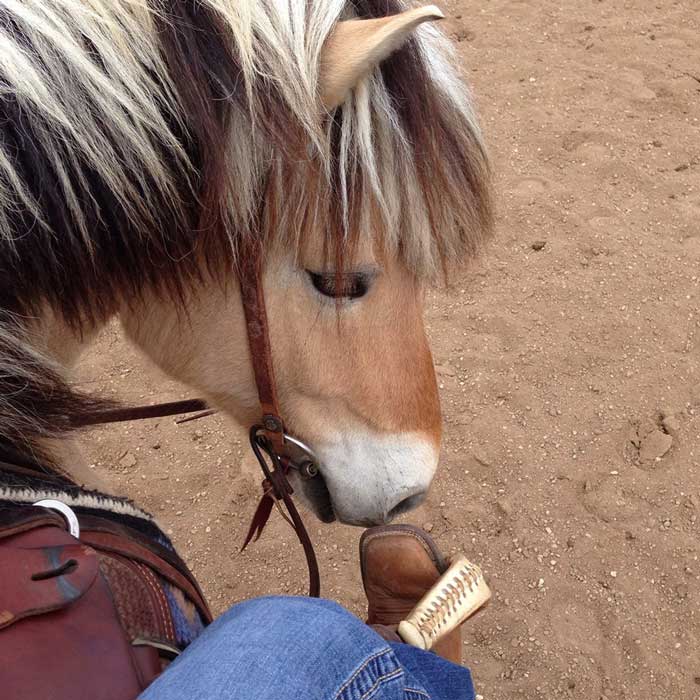 Don’t Make Excuses to a Cowboy

Freddie the Norwegian Fjord Horse noses my boot at a recent cow-working clinic with Buster and Sheryl McLaury.

If a horse could be an equine version of a teen star heartthrob, it is Freddie the Norwegian Fjord Horse. His thick, streaked mane flops over his big round eyes just like bangs on a surfer dude, and he’s got the same loveable attitude.

He was my partner for a recent cow-working clinic in Colorado given by Buster and Sheryl McLaury of Paducah, Texas. I was riding the gelding on loan from my friend and clinic host, Pam Pierce, when it turned out I couldn’t bring my Quarter Horse mare to the clinic.

So, when we went to work cattle, it was about 10 minutes after I threw a leg over Freddie for the first time. Our task: Cut one cow from the small herd and drive it around a folding chair at the other end of the pen.

Freddie and I pushed out a very slow Charolais. She beat us in the turn at a walk. Many times.

My legs drummed on Freddie’s sides with about as much impression as a 5-year-old on a Belgian. I could feel Freddie thinking, “Dude, what’s the big deal with the cow?”

My clinic compadres were sympathetic and supportive. At the end of the attempt, I rode by Buster and said something about how nice it is when you have a cowy horse.

Well, that was the wrong thing to say. The respected Texas cowpuncher sorted me out on the spot.

He looked at me with his steady gaze, quietly said, “But you’ve got a job to do no matter what you’re mounted on,” and turned away.

I think it might have been a few seconds before I thought to close my mouth.

I had carelessly blurted what I took to be a fact. But cowboy logic sussed out what my statement really was: an excuse.

Hamilton, why don’t you keep your dang mouth shut? I thought. Freddie reached around and nosed my boot. And you blamed your horse! It was wrong all the way around. But the more I thought, the gladder I was that I had been stupid out loud.

Buster wasn’t letting me make excuses for not being able to do this job. Which might mean he thought I could do this job, and with Freddie.

It made me start thinking instead of excusing. I needed a better partnership with Freddie. And I needed a strategy.

For the next two days of the clinic, that’s what I worked on. With Buster and Sheryl’s pointers, I got connected with Freddie through transitions and straight stops, backing and getting off my leg.

I figured out that any disadvantage Freddie might have in speed, he sure made up for in blond build. If I’d stay further back and keep things slow, Freddie’s substantial presence could stop cows like a handsome surfer in the water stops girls on the beach. And it seemed that Freddie had fun doing it.

Even better, I think Buster smiled when we finally got the job done.