From Saddles to Songs

An avid music lover, Haskell contacted Little to coordinate a big gig with his friends and fellow musicians Taussig of Kremmling, Colorado, and Beck of Monterrey, California. It turned out Little and Taussig, both handy with horses, cattle and a rope, were not only able to perform but also participate in the branding.

Beck, who worked on ranches in California, Nevada and Montana in the 1970s and ’80s and spent a lot of time learning from horseman Bill Dorrance, now spends his time on the road conducting a few horsemanship clinics in Scandinavia and doing house concerts all over the West. Some of his favorite gigs, however, are performing for ranching families.

“Got to my gig…like I say, I could be doing a gig in Los Angeles. No, thank you. Glad to be here!” he posted on his Facebook page when he arrived at the TA on the afternoon of July 8.

Caitlyn Taussig runs her family ranch in Kremmling, Colorado, with her mother and sister. She released her first CD in 2014, entitled The Things We Gave Up.

Trinity Seely, another well-known cowboy singer-songwriter, sang at last year’s dinner show. This year she had taken a break from the road and joined her husband, Jeff, in roping and dragging calves to the fire. Though she didn’t perform directly with the other musicians, she did break out her guitar and jam at her trailer.

Performer Trinity Seely sets up a calf to be heeled at the TA Ranch branding.

Friends, family and good food are staples at a branding, but when members of the crew also sing and play the guitar it adds to the fun. It was especially enjoyable for 10-year-old Callie Turner, the daughter of Matt and Jennifer Turner of Saratoga, Wyoming, because she had each singer autograph the top of her flashy pink, teal and white boots. It’s humbling for the performers to know their music is relating to audiences of all ages.

“We are just ordinary ranch people,” Little says of himself, Beck, Seely and Taussig. “There are no egos. We just went to rope and play. Isn’t it that way everywhere? If not, it should be.”

Watch for articles on Little, Taussig and the TA Ranch in future issues of Western Horseman. 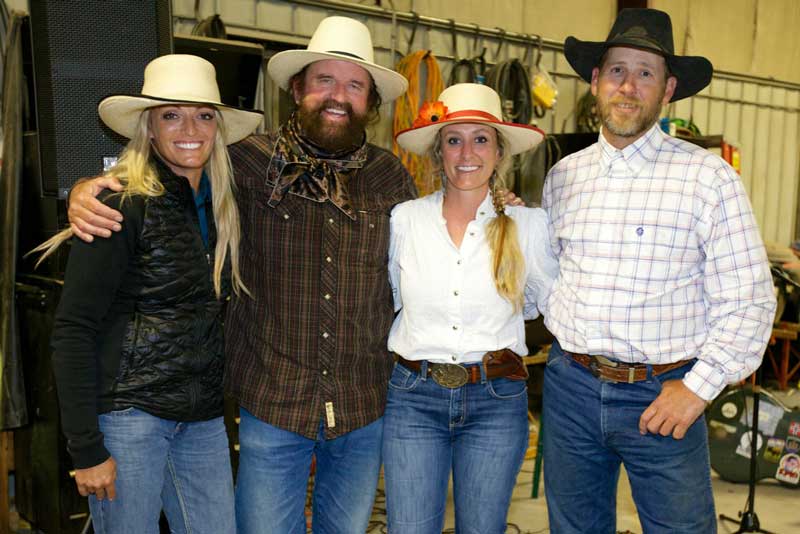