Story and photos by Ross Hecox

Plenty of times I’ve left the house in the dead of night for the sake of a photo shoot. But usually my departure in the darkness was necessary because I needed to drive several hours and be on location when the light was ideal—at sunrise. One morning last June, I pulled out of my driveway at 2:30 but drove only 40 miles for a photo shoot with cutting and cow horse trainer Boyd Rice, who lives in Weatherford, Texas. I arrived shortly after 3—way before daylight—because Boyd was working horses at that time.

It’s not uncommon for temperatures in Texas to rise above 90 degrees before noon. To beat the heat, many cutting trainers in warmer climates begin saddling horses hours before dawn.

“Getting up that early doesn’t seem to bother me too much,” says Boyd, who has earned more than $5 million in cutting and reined cow horse competition. “I just go to bed earlier.” 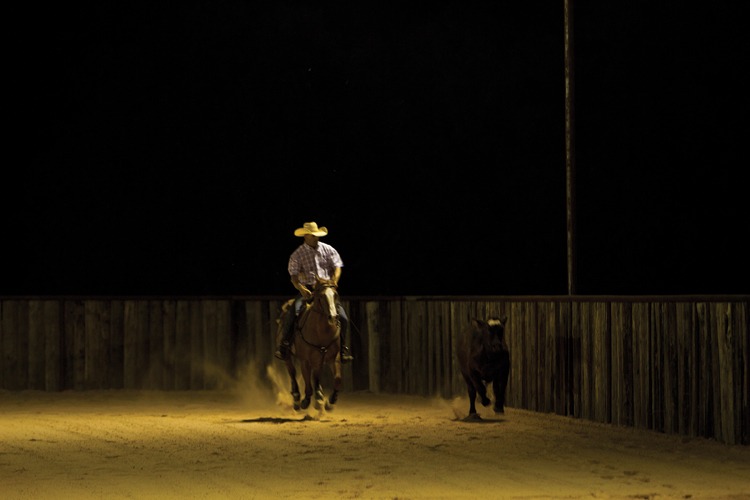 When I stepped into the arena with my cameras, Boyd and his assistant trainers were loping horses, working cows, talking and joking around like it was midday. The arena lights glared down from a pitch-black sky, casting funky, uneven shadows on the horses and their hoof prints left in the sand. In some places, the light was strong and dramatic. In other areas it was dim, forcing me to shoot with a slower shutter speed and pick up motion blur in the images.

It was challenging to photograph, but the environment was exciting to capture. After three hours of shooting, the eastern sky finally began to brighten. As Boyd worked his seventh horse—a promising 3-year-old cutting mare—a few clouds framed a brilliant red horizon.

Just before 6 a.m., Boyd warms up his seventh horse for the day.

The balance of light in the sky and in the arena was perfect, giving me a unique image for a story in Western Horseman (“Ahead of Sunrise,” August 2015). The article chronicles a typical day for Boyd. The next day the 50-year-old trainer was at it again, working hard in the wee hours of the morning. I was in bed.