Clint Mortenson builds saddles while his animals monitor his progress.

Story and photos by Ross Hecox

Saddlemaker and silversmith Clint Mortenson is accustomed to working with others looking over his shoulder. His shop is a renovated stall in his barn, and his horses often peer in from their adjoining pen while he carves leather, engraves silver, or hammers and stitches together one of his handmade saddles.

While visiting his place near Santa Fe, New Mexico, last year, I found a wealth of photographs to capture—detail shots of fine bits and spurs, portraits against the adobe walls of his barn, and scenes of him working inside his Western-themed shop.

Later, after I photographed him under the watchful eye of his animals, Mortenson saddled the two horses and roped steers with his teenage son, Wyatt. Recent success has allowed him to both expand his business and hire more help.

“Now I have a little more time to spend with Wyatt, and that’s what I like to do,” he says. 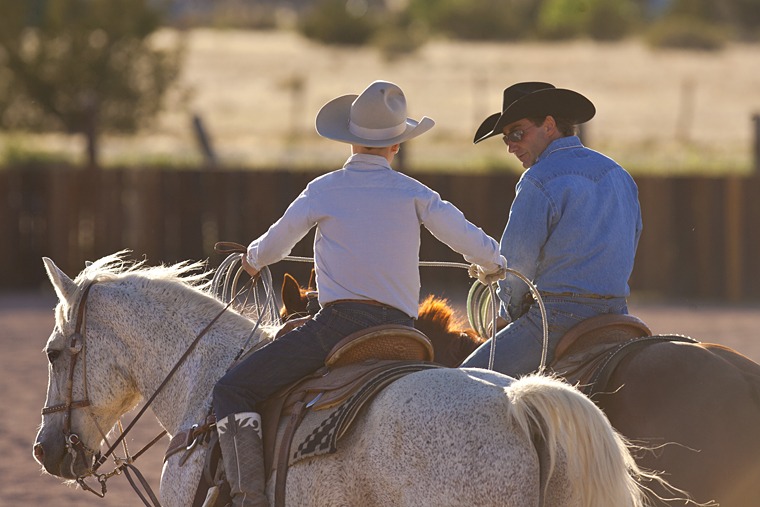 Mortenson and his son, Wyatt, work together on their team roping skills.

There was a time when work consumed Mortenson’s life.

“I used to be in the shop six or seven days a week, for almost 20 years,” he says. “Now I’m able to get out. I’m giving some roping and riding lessons, training a few horses, and I’m able to take off and go to a branding.”

Mortenson adds that he no longer dreads going to work. And if his horses poke their heads into his shop, that’s fine. It’s a nice reminder that they are right outside the door, ready to be saddled.

These days, Mortenson spends more time in his barn and around his horses.

Read more about Clint Mortenson in the August 2015 issue of Western Horseman.