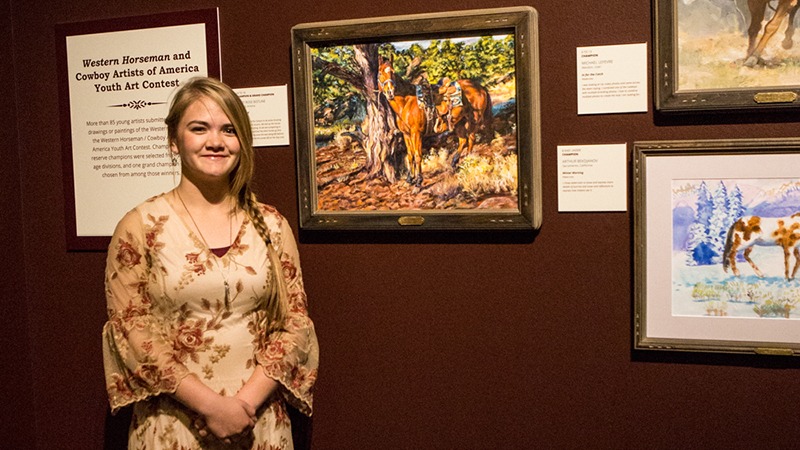 Cowboy Crossings is a great place to feel like the grand champion of the 2018 Western Horseman / Cowboy Artists of America Youth Art Contest.

Dusti Rose Bistline, 16, lives and rides on her family’s ranch in the Arizona and Utah borderlands between the Grand Canyon and Zion National Park. She also paints, and one of her oil paintings, Left Behind, was named grand champion in the 2018 Western Horseman / Cowboy Artists of America Youth Art Contest.

The win came with a grand prize trip to the legendary National Cowboy & Western Heritage Museum in Oklahoma City, Oklahoma. It was for the opening weekend of the 2018 Cowboy Crossings,  the annual art show and sale for the Cowboy Artists of America and the Traditional Cowboy Arts Association held at the museum.

At the event held October 5—6, 2018, Dusti met famous cowboy artists whose work she’s admired. She attended the exclusive preview reception; went to the autograph party and had an official Cowboy Crossings poster signed by the artists; watched the artists’ demonstrations in the gallery; and was presented her award at the sale luncheon.

“It’s surreal,” she said. “Getting to know the artists—being able to see people that I’ve looked up to for years—that’s the best.”

She also saw her winning painting hanging in the museum. In fact, all three of the contest’s age division champions hung there: grand champion and 14-18 winner, Left Behind, by Dusti Rose Bistline; 9-13 winner, In for the Catch, by Michael LeFevre of Mendon, Utah; and 8 & under winner, Winter Morning, by Arthur Bekdjanov of Sacramento, California.

Catch the slideshow of the 2018 top ten artwork in all three age divisions.

Dusti lives with her parents, Joe Bistline and Jill Finicum, and seven siblings. Her grandparents, David and Nelda Finicum, also ranch with them, as well as her aunt and uncle, Joe and Tadi West and their children.

The mare Dusti depicted in her painting is her Aunt Tadi’s horse. Dusti took her own reference photos from which to paint.

“I was stressing about finding a reference photo for this contest, so I took pictures whenever I could,” Dusti said. “I picked this one for the colors and the expression on her face.

“She’d just had her foal, and her foal had chewed off her tail. My aunt asked me if I would make that longer [in the painting].”

As for the future, Dusti plans to take the advice she often heard from artists all weekend: “A lot of them have said, keep going!”