Chris Littlefield trains roping, cutting and reined cow horses out of his Henrietta, Texas facility, where he has been based since 2008. Prior to that, he worked on several outfits, including the Pitchfork, Moorhouse and Stuart ranches.

Q: How should I train my 11-month-old horse to get in a trailer? I haven’t tried to load her yet but want to be prepared. When she was 4 months old, before I had her, she rode in a trailer a couple of times. I have had several people tell me how I should do it, but I wanted to know the best and the easiest way to train her.

A: First of all, your horse needs to understand how to lead well, meaning she knows how to stop, go forward and back up. To reduce the stress on both of you, I suggest practicing loading before you ever actually need to go somewhere. At this age your horse will be more interested in than scared of the trailer.

Park the trailer in an area that is secure and safe, possibly even inside a corral, or surround the back end of your trailer with safe and secured panels. Open up the trailer door and tie the door open so it can’t unexpectedly blow shut. Dark trailers can be especially scary, so allow as much light as possible into the trailer. Place a familiar feed tub inside the front of the trailer and place some feed in it. Call her attention to the feed so she knows it is there, then leave her alone and let her be curious and figure out how to get to the feed. This will be an important and rewarding way for her to get used to stepping up into the trailer, the sound her feet make on the floor, and even the movement of the trailer under her weight.

When she becomes comfortable with that process, you can walk up in the trailer while she is eating and pet her to let her know it’s okay for both of you to be in there. Once she remains calm through that process, you can try leading her in the trailer by herself. If she is resistant after a couple attempts, try the buddy system: Let her watch you load a gentle, experienced horse and tie him in the front of the trailer, then see if she will load with the other horse.

Sometimes horses need encouragement from behind, but don’t ever stand behind them because they may kick out of fear. A good way to encourage them to go forward is to put a lariat loop around their rump and pull on it to move their body forward. Remember to release pressure when they make any forward motion so they understand that going forward is the easy option to do. Once she is loading well, tie her in the trailer for an hour at a time. After a couple of those sessions, load her and take her on a short drive so she can start learning to leverage herself going down the road.

Q: I recently rescued a young horse that I think is about 2 years old. She hasn’t had much handling at all and is very scared. She is halter broke but doesn’t lead very well, and now it’s hard to get a halter on her. She is turned out on an acre of pasture and I don’t have a smaller area to keep her in. Do you have any tips on getting her comfortable with people? She will come up and eat, but as soon as I reach for her she leaves. She doesn’t go far, and seems to be getting slightly more comfortable when people are around, but the progress seems so slow.

A: While it is great to have a large lot to turn her out in, you need a more confined area to work with her and build your relationship. It would be like yelling across a crowded room at someone instead of having the one-on-one conversation you need to have to get to know them. I would suggest investing in some panels to build a safe pen and be sure to include a gate that swings to the inside. Get her used to this small corral by feeding her in it and staying in there while she eats. Be consistent with this for several days in a row. Once she is comfortable eating this way, get her to where she will eat her food out of your hand. As she gets used to this she may allow you to approach her at the shoulder and stroke her neck. When you notice she has become comfortable with you, you might consider bringing a friend of yours to feeding time to help your filly get used to other people being around her. To halter her, use your gate to push her against the side of the corral to keep her safe and secure while haltering her (See the article about working with young horses in the June 2014 issue of Western Horseman).

Don’t go too fast; let her get used to the idea that you are putting her in a tight yet secure space so she can remain as calm as possible. You can leave the halter on her while she is in the small corral, but do not turn her out in the pasture with the halter and lead rope on her as this presents safety issues.

If you’d like to submit a question, please send an email to [email protected] by May 23. Please include your full name, city and state in your inquiry. Depending on the volume of questions received, some questions may not be answered. Western Horseman retains the right to edit submissions for clarity.

Miles Baker — Riding Outside the Arena 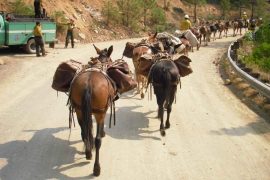