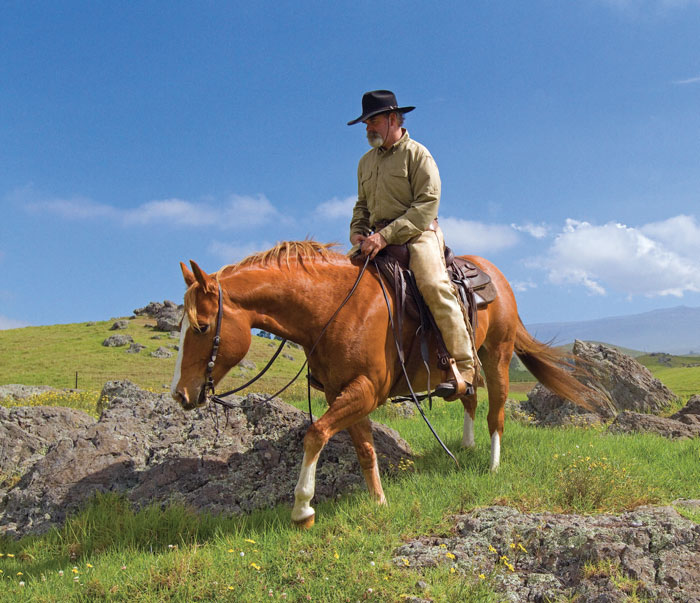 Look Him in the Eye

The Flight Risk
Buckley says recent breeding trends have produced a higher number of hot but delicate horses, and they fit into his “flight risk” classification.

LEFT: In the pasture or in the stall, this gelding has a slightly alarmed look. His outlook on the world is one of concern, even though he is a superior athlete. RIGHT: The angular shape of the horse’s eye and the excessive wrinkles above it indicate this horse is often worried and on the lookout for predators. It takes a skilled rider to overcome this horse’s mental obstacles.

“We now have horses that are so talented, but careful and cautious,” he says. “We have lost some of the stoicism and courage that was in the more cold-bred horses years back.

“This gelding [shown above] is the most worried horse I have, and also, by far, the most talented. But I also have to hold him together. He is highly insecure, and that shows in anxiety and how he is overly attentive to anything—a bird flying or tree swaying. His eye is very expressive and always has the startled look. It is wrinkled on top and bottom, showing his worry.”

This gelding displays inconsistent behavior when Buckley catches him in the pasture. One day, the insecurity will be displayed through the horse’s overeager attempt to get as close to Buckley as possible. The next day, the horse may hang back out of timidity. This type of horse needs a strong rider to give him support.

“A confident rider, one that knows how to control the flight instinct through calmness and not force, is needed for this type of horse,” says Buckley. “He wants to be secure, and he is looking for that security from everyone around him. He is timid and worried. If you buy a horse that is borderline flight mode, you have to be a seasoned, highly confident rider to keep it together. This horse is not everybody’s cup of tea.”

Buyers often purchase a talented horse in anticipation of competing at a high level, but then find it hard to hold this horse’s attention and keep a consistent training regimen, Buckley says. The horse can be mislabeled as a troublemaker because of its lack of courage.

“This is not a good horse for someone who is just getting into riding or looking for a horse to do everything,” he says. “A seasoned rider will keep this horse on track and not give it a lot of free time to go on autopilot, because that is when this type of horse can get into trouble. This timid horse needs its hand held.”

Buckley cautions a prospective performance-horse buyer against focusing only on the horse’s physical attributes. Look deeper at how the horse acts when it is alone, and get an initial impression of the horse’s eye when it is at ease. The worried, fearful look is easy to spot.

The Herd Leader
The majority of horse people can recognize what many term an “old campaigner.” Such a horse, typically an older one, carries an expression that says, “Been there, done that.” However, Buckley says that a confident, stoic horse that is recognized as a leader exhibits some of those traits at an early age.

“My first instinct with this horse is that he is highly intelligent but not mean, a leader and not a follower,” Buckley says of a liver chestnut he’s picked out. “He is totally aware of everything that is going on and doesn’t worry about it.

Buckley says this is his own “ideal horse,” but he had to work to earn the horse’s respect.

“This gelding had no interest in what I wanted him to do until I established myself as the herd leader. Then, he worked with me but not for me. The shape of his eye—not round, but more shuttered—forebodes that he will challenge any type of forced leadership.”

There is not an overabundance of tissue above the eye, and the few wrinkles are due to age, not worry.

Though his head is as not as refined as that of many performance horses, this gelding’s eyes display his intelligence.

“This horse is the leader in any band, but never calls attention to himself,” says Buckley. “In the pasture, he is passive when others are causing drama. The other horses look to him for security and leadership. He only looks to me, and that is only because I’ve earned it.

“This is not a horse for beginners. Each stride, he tests the rider for authority. He may be good at first, but after about 10 or 15 minutes without leadership he respects, he’ll get rid of you. Maybe he won’t get rid of you by being a bronc, but by scraping you off on a fence or under a branch. This horse is super-intelligent and highly confident.”

Though best suited for experienced riders, a horse like this will not respond to force. Only by gaining respect correctly can the rider establish a leadership role.

“The challenge when looking for a horse is to find a horse with courage, like this one, but the talent and skill set of the more modern horse,” says Buckley. “It is a balancing act. When buying your first horse, or buying a new horse in general, be aware of the bloodline as well as the horse’s attitude. Today’s horses are high-quality athletes, but many lack the courage needed to be a good, confident mount for a new rider.”

Armed with Buckley’s expert guidance on judging a horse’s attitude through eye expression, horse buyers and owners can better understand how to connect with their mounts. The goal, Buckley says, is to work with the horse and become a team.

“A horse hangs its emotions out through the eyes, and the eye tissue is the frame,” he says. “Is the frame more closed on life, or wide open? Does the horse hang back in the pasture or walk over and on top of you? Being aware of these signs can help take the guesswork out of working with a horse, and keep the horse and rider on track to success.”

Meet Lester Buckley
Lester Buckley grew up in rural Texas. As a student at Sul Ross State University in Alpine, Texas, Buckley attended many Ray Hunt clinics, returning to the school to teach Hunt’s lessons to other riders. After graduating in 1985 with a bachelor’s degree in equine science, Buckley apprenticed with National Cutting Horse Association Hall of Fame trainer Willie Richardson before starting colts for the King Ranch. By 1992, he was traveling between the South Texas ranch and the Parker Ranch on the island of Hawaii. Eventually, Buckley became the horse manager on the Parker Ranch. Today, Buckley and his wife, Mary, reside in Hawaii. Buckley now works with Western and English horses, often traveling to the United States and Europe to present clinics and aid people with problem horses.

Lessons on the Fence