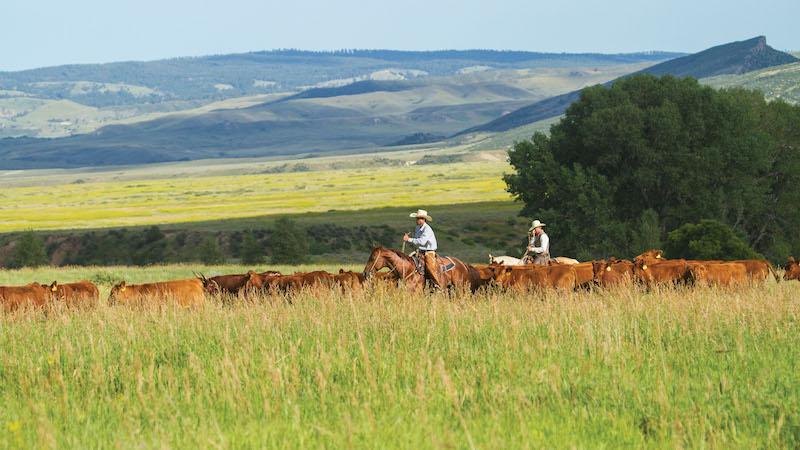 Lessons in the Grass: Benefits to Riding Outside the Arena

Although not ideal footing, open pastures can set up cow horses for success in the show pen. Wyoming trainer Matt Koch shares four benefits to riding outside the arena.

There’s a good reason why reined cow horse events aren’t held in open pastures. Grass offers poor traction, and it hides rocks, holes and little humps in the ground. And without an arena wall, there is no way to box a cow or turn it into the fence.

Nevertheless, Matt Koch loves training his cow horses outside once in a while, working on reining maneuvers, cutting and circling cows in the vast alfalfa field below his indoor arena and large outdoor roundpen. As head trainer for Wagonhound Land & Livestock, located south of Douglas, Wyoming, he trains and shows the ranch’s performance horses in National Reined Cow Horse Association shows, as well as various ranch horse events. He also starts 2-year-olds for the ranch.

“We just go use them,” Koch says. “We don’t even pretend to be training. If we’ve got to go help hold herd or put together a bunch of cows, I’m not a horse trainer that day. And that seems to be the best thing for those horses. They don’t have to worry about me picking on them; just go perform a job.”

Wagonhound futurity prospects spend most of their time in the arena, learning to stop, spin, rate cows, make turns on the fence and execute other maneuvers necessary for reined cow horse competition. Ranch work is a nice break from that grind. In addition to assisting the cowboy crew, Koch sets up occasional training sessions in the pasture.

“It’s helping their minds,” he says. “Last week I spent three days working on reining down in the hay meadow. I put them in a hackamore and had them change leads, turn around and lope big long lines. We don’t do that often—maybe once a month. But I think they’ve got to have some variety—at least for my program—to help them stay mentally sound.

“It’s kind of how I started. I worked for Haythorn [Land & Cattle Co. in Nebraska], and Craig [Haythorn] was great about letting me try to be a horse trainer. On hot afternoons I would take a 3-year-old in that sandy country, and all the cows would be gathered around the windmills and I would work on cutting. And I spent a lot of time loping circles in their alfalfa field right next to the outdoor arena.”

When riding across grass, Koch knows better than to ask for big stops or to turn a cow at top speed. But he says horses benefit immensely from outdoor cutting sessions and circling cows at a high lope across uneven ground. He also sees value in pasture roping, whether or not the horse ever competes in timed events or has to stop a yearling in ranch horse events.

“It all relates,” he says. “Even though they’re show horses, you can do anything outside on them. The more situations we can put them in here at home, the easier that show pen is for them.”

To be competitive today, reined cow horses must display a high level of finesse, grit and cow smarts in the show pen. It’s easy to put too much pressure on futurity prospects, both physically and mentally. Koch believes that working in a different setting is one way to give horses a fresh perspective and offer a welcome change in routine.

Working in a large area lessens the pressure because maneuvers don’t have to be executed with as much immediacy. The horse doesn’t have to make a move before the arena wall redirects the cow and spoils a training opportunity.

“You’re in no rush,” Koch says. “If that horse is getting stronger, or if that cow is running fast, you can just rate with it and wait until everything sets up right [to circle, turn or stop the cow]. You don’t have to put him in a high-pressure situation. You can kind of just let things happen.”

Koch adds that working outside also helps horses focus on their job, although in a roundabout way.

“It’s bred into horses nowadays to think so much—to react to every little motion a cow makes,” he says. “So they’re going to see all kinds of stuff outside. We’ve had horses we’ve shown that are good in the arena, but you take them outside and they’re real ‘looky.’ They have a hard time focusing.

“So by putting them in different situations, you’re making them handle those situations. Eventually they relax outside and focus on doing their job.”

Koch says that imperfect ground makes a horse more sure-footed, and that helps in the show pen.

“It teaches them to find their feet,” he says. “There are bushes and rocks, and if they hit one they learn not to get scared. Later, if they stub a toe when you’re showing them, it’s no big deal. It happens.”

When chasing a cow across a grassy, possibly slippery pasture, a horse also learns to keep its shoulders square and move in a balanced frame.

“Circling a cow outside on the grass teaches them that they can’t lean,” Koch says. “Because if they lean, they might slip and fall down in the grass. Before long they just learn on their own to keep their shoulders up and use their whole body.

“They have to learn to find their feet. You may be chasing a cow across a small hill, and the horse better stay square or we’re going to fall. So instead of me having to pick on them [to not lean], they learn to do it themselves. The correct way is the easiest way.”

Horses that are used to working in soft arena dirt aren’t afraid to drop their hocks and drive their hind legs into the ground. But that’s not ideal on slippery grass, so Koch doesn’t ask for dramatic stops. Still, his horses have to learn to adjust.

“I’m not asking them to run and hit the stop as hard as they can,” he says. “They have to stop a little more on their front end. And that is good because if you draw up late in the herd work, and the ground has gotten packed and slick, the horses already know how to use their front end to get stopped. They’re not going to get scared because they know how to adjust. We all want that big ol’ stop, but sometimes the show conditions don’t allow it.”

The outside world offers plenty of distractions—wildlife, new smells, and strange shapes and shadows in the distance. By working in such an environment, horses eventually stop focusing on diversions and bear down on their job of working a cow.

And in an open pasture, cows behave differently. They may have more life or become less frantic, depending on the circumstances. Without an arena wall to guide them, they run in crooked, unpredictable directions. Regardless, the horse must pay close attention and read the cow’s next move.

“The cow is going to change directions a bunch of times,” Koch says, “so the horse has to change leads and balance itself in order to keep up with the cow. He learns to read a cow in every situation.”

Koch ropes with most of his cow horses, whether outside or in the arena. Not only does it prepare the horse for an alternate career, but it also encourages the horse to read the cow and listen to the rider. Koch says that if a horse only turns, stops or circles a cow, then he begins to charge to the cow’s head every time. Roping teaches the horse to rate the cow from behind, stepping past the cow only if the rider asks.

“They learn that just because we’re chasing that cow doesn’t mean we’re going to circle it or turn it,” Koch says. “It teaches them to rate. And later that helps me when we’re coming out of the corner to go down the fence. They can rate on a loose rein.”

Finally, Koch believes that exposing horses to new environments and all sorts of tasks— whether roping, performing ranch work or circling cows in an open pasture—builds their confidence.

“It gives them a job and makes them responsible,” Koch says. “I don’t have to hold their hand all the time. It gets them thinking.

“They are more versatile. They’ve been used outside and anybody can get on them and do a job. They’re not real specialized, just an all-around horse. And that just keeps them happy, I think.”

“The more stuff we can put them through before we go show,” he says, “the less likely we are to worry them or scare them in that show pen.

This article was originally published in the July 2016 issue of Western Horseman.