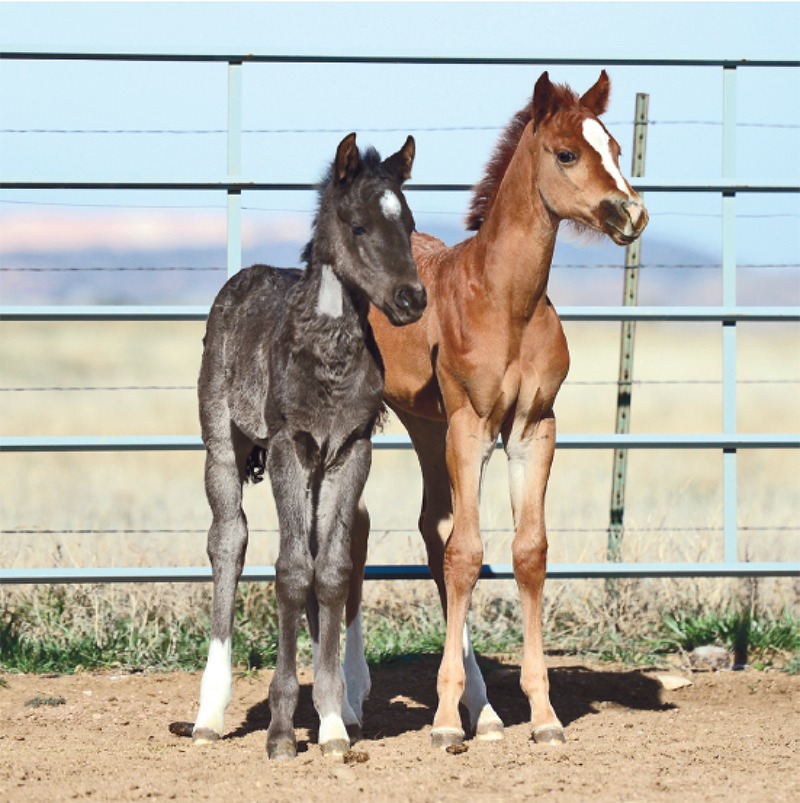 When it comes to mothering instinct, there’s no predicting what some mares will do.

Sam Shoultz of Kesa Quarter Horses in Fort Collins, Colorado, was out of town when his help called to let him know one of his mares had foaled unexpectedly early. They reassured him that they had the pair up from pasture, and veterinarian Stacey Tarr, DVM, was on his way to take a look at the newborn filly. But Shoultz pointed out another problem.

“I said, ‘You better look around; there’s another mare who had that filly, because that mare [with the filly at her side] wasn’t bred last year,’” Shoultz recalls.

Sure enough, an open mare had stolen the blue roan filly. By the time the crew had the foal’s actual dam in the barn, the real mother wanted nothing to do with her foal.

“They could stand there and force her to let it nurse,” he says. “But it had been almost a day, and that mare just rejected the baby. I don’t fault the mare for it; she just didn’t recognize it.”

Luckily, it was still within the 12-hour window for the foal to nurse its mother’s colostrum, the antibody-rich “first milk” that gives a newborn its initial boost of immune protection. But as the hours stretched into the next day, there was no convincing the mare that foal was hers.

“If there’s something that interrupts the foaling process, and [the mare and foal] don’t have a chance to bond, it can be a problem,” Tarr explains. “This mare had had foals before, so it was unusual that we couldn’t get her to bond with her baby.”

Strange Behavior
Based in Wellington, Colorado, Tarr specializes in equine reproduction and has seen cases of foal rejection in a variety of forms.

“I see it more frequently in young, maiden mares,” Tarr says, “when people have bred a 2-year-old and she foals at 3, and she just doesn’t know what to do.”

In many cases, the mare might not want to be near the foal at first, but maternal instinct often kicks in once the foal nurses. Tarr also has seen cases in which a young mare isn’t rejecting her foal, per se, but simply wants to keep the foal out in front where she can see it, and doesn’t understand she needs to let it nurse. He points out that it’s not unusual for a mare that has problems accepting her first foal to be fine with mothering future foals.

There are other causes of foal rejection, Tarr adds.

“Medical problems can also cause a mare to reject a foal,” he says. “If a foal is sick and down and hasn’t done the things that normal babies do, a mare can get to a point where she’ll ignore it. If some mares are not stimulated to be moms, they won’t be.”

Pain from an extremely full udder or mastitis also can cause issues with foal rejection.

“And there are mares who are just poor mothers, and want nothing to do with a foal,” he adds, pointing out that those mares can quickly become vicious. “I had one that would let her foal nurse if someone was holding her, but would ravage it [otherwise]. It doesn’t take [a mare] long to kill a foal.”

Tarr personally hasn’t seen tendencies for especially good or poor maternal instinct to run in mare families, or to be more or less common in different equine breeds. However, he is convinced that there is a learned element to mothering.

“We are finding out with the decades of embryo transfer that a recipient [surro-gate] mare is more than just a uterus and four legs,” Tarr says. “So much of equine behavior is learned, and they learn from their mothers.”

Regardless of the reasons behind rejection, he says mare owners should “be proactive, not reactive” about intervening to help the mare accept her foal, or in realizing when she simply will not.

“[Maternal instinct] is a very bizarre science,” he continues. “You’ll have one mare who wants absolutely nothing to do with a foal, and you’ll have another who will take any baby that will suck, and there’s every variation in between.”

Oddly enough, the cause of Shoultz’s foal rejection dilemma was an instance of high maternal instinct in the mare that stole the filly in first place.