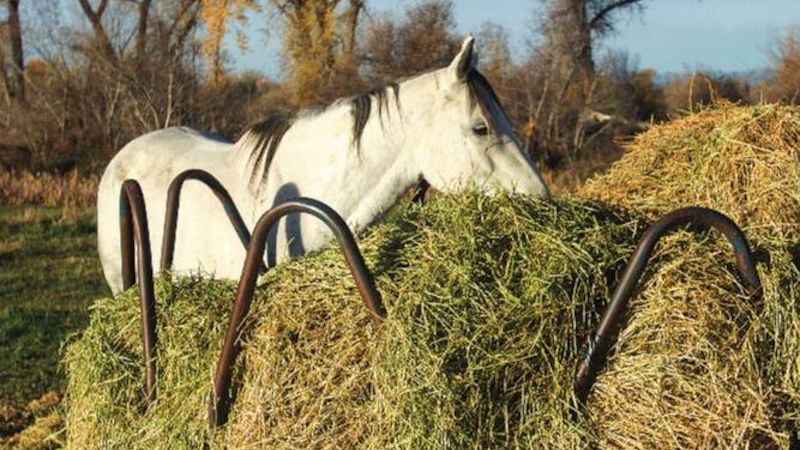 Perform these simple tests on your healthy horse now so you can quickly identify the paralyzing disease should it occur.

When winter settles in and there’s a round bale in sight, you are likely to see horses gathered around it, intent on  filling their bellies.

But trouble can lurk within those large, stemmy bales. Earlier in the year, when farmers cut and bale hay, it’s not uncommon for them to accidentally bale a small, wild animal carcass in with the hay. As the carcass decomposes, the bale can harbor the risk of botulism, a paralytic and often-fatal disease.

The disease is caused by toxins released by Clostridium botulinum, the same genus of bacteria responsible for tetanus and, in cattle, blackleg disease.  The anaerobic bacteria flourish in oxygen-deprived environments, such as a decomposing carcass.

“The bacteria release a toxin that blocks the neurotransmitter end of the nerves,” explains Britt Stubblefield, DVM, of Rocky Top Veterinary Service near Woodland Park, Colorado. “It causes the nerve to quit functioning.

“The most common [cases of botulism] you hear about happen when dead animals get baled up in hay,” Stubblefield continues. “But spoiled grain will cause it, too. We also see the problem in haylage or bagged hay or silage.”

When a contaminated bale is dropped off for the herd, the carcass and the surrounding hay will eventually be exposed to the horse. While most horses avoid tainted hay, they may be more inclined to consume it in cold months when forage intake is limited.

Stubblefield, who feeds his horses round bales and is aware of the risk, cautions owners to regularly check hay for signs of contamination.

“Make sure you feed clean hay and do not feed lawn clippings,” he says. “If you see any dead animals, don’t feed that bale. Or if it’s a big bale, don’t feed that portion of the bale. People typically throw the whole bale out and then don’t ever go back and look at it.”

Watch For The Signs
Stubblefield says that symptoms of botulism appear within 10 days, but can first show up in as little as one day. He says there are three signs of toxicity that owners can easily test for in their horses. Ideally, performing the tests on a healthy horse establishes a baseline reaction that can help you flag when something’s not right.

1. Tongue Function: One of the first things Stubblefield looks for if he suspects a case of botulism is a  flaccid tongue. The botulism toxins affect nerve cells throughout the body, preventing them from transmitting signals to muscles. Some of the earliest muscles affected include the tongue.

To test tongue function, Stubblefield says to offer your horse a handful of grain in a bucket. A healthy horse will gobble it up within seconds, while a sick horse won’t make a dent in the feed despite efforts to eat. It’s common to see an affected horse push grain around with its mouth, unable to keep the pellets in.

The age of a horse and the condition of its teeth can affect eating time, so practice this test on your healthy horse now to set the standard for what’s normal in your horse.

2. Pick Up the Tail: Like the tongue, another common sign is a flaccid tail. To test a horse’s tail strength, Stubblefield says to slowly lift up at the base of the tail. A healthy horse will resist the upward motion, and keep the tail tucked down. However a horse in the early stages of botulism poisoning will not physically be able to hold the tail down at its base.

3. Check the Eyes: In addition, the horse’s eyelid tone decreases, and the eyelids start to droop. To test eyelid tone, gently move the upper eyelid up and down. If the horse doesn’t resist the opening and closing motion, contact your veterinarian.

If caught and treated early, horses can survive the paralyzing effects of botulism. However, the key is early intervention by your veterinarian. Early treatment—which includes giving hyperimmune plasma containing antibodies—decreases the effects of the botulism poisoning, and is the only hope for recovery.

The good news is that while nerve damage is irreversible, a horse’s body can regenerate the neuromuscular junctions connecting nerves and muscles.

“At that point, the difficulty is in keeping the horse eating, drinking water, and comfortable,” he says. “If you can do that, the survival rate can be pretty good, but only if you caught it early in the first place.

“However, if the damage affects the function of the respiratory system, the humane thing is to put the animal down.”

The bacteria can produce several types of toxin that are very region-specific nationwide. For that reason, there is limited vaccine protection available against botulism. Stubblefield stresses that it’s important to talk with your veterinarian before pursuing that.

By familiarizing yourself with your horse’s responses to the tail, eyelid and grain tests, you’ll be able to quickly spot if he’s not feeling well. And while it might be tempting to hole up inside on those cold days and watch your horses graze on a round bale, a quick visit to check on their hay can possibly prevent a lot.

This article was originally published in the December 2014 issue of Western Horseman.

Just What the Doctor Ordered

Win the Game Against Gastric Ulcers