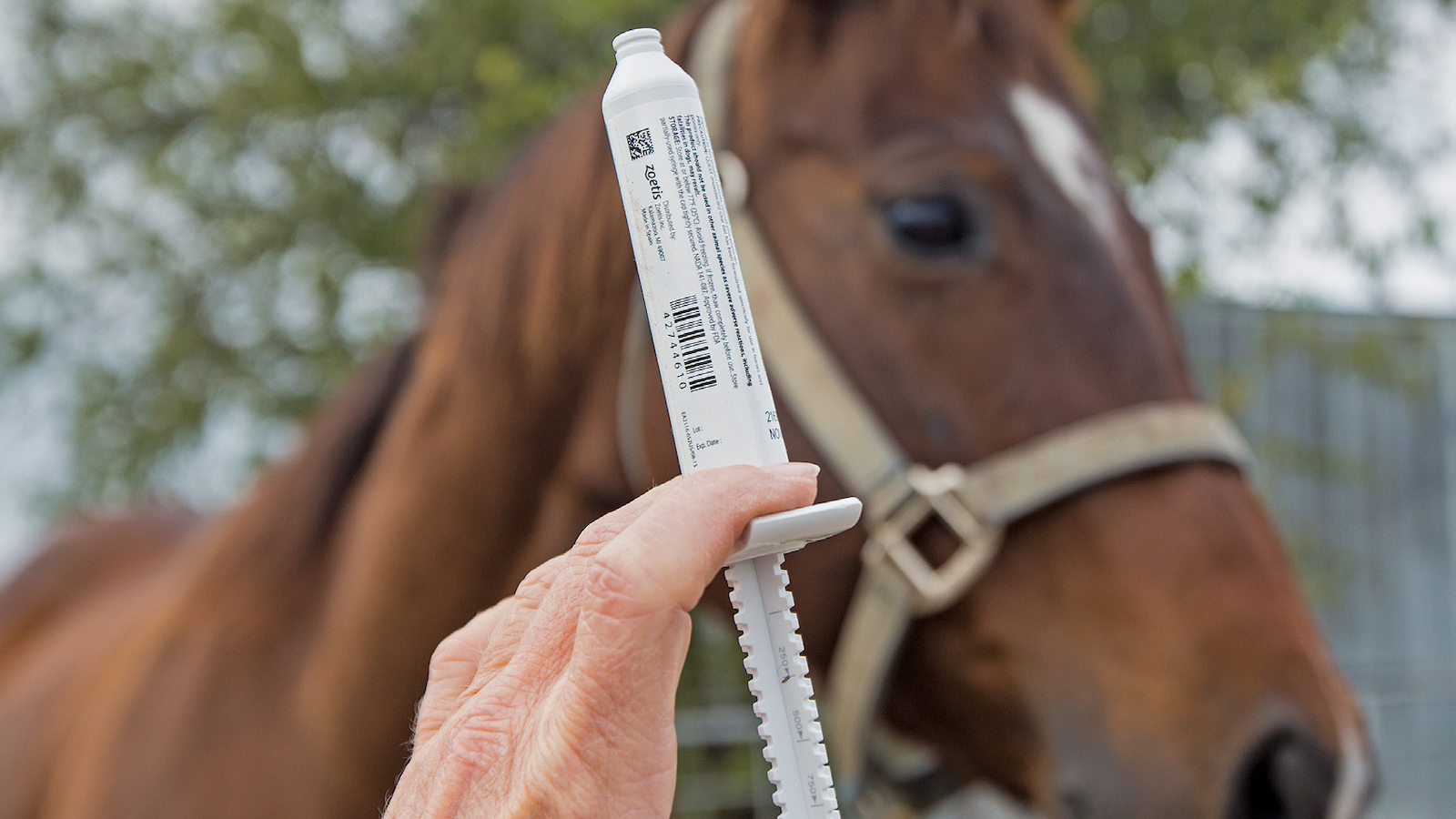 If you still use a rotational deworming plan, you are probably helping rather than hindering the parasitic worms invading your horses.

For roughly 40 years, conscientious horse owners nationwide have religiously followed a standard, veterinary-recommended deworming protocol with their horses: Deworm every 60 to 90 days, rotating the type of drug you use every time.

“That’s just not a good way to do it anymore,” says veterinarian Kenton Morgan, DVM. You’d be hard pressed to find a veterinarian in the United States who would disagree.

One reason is drug resistance. Throughout the past 20 years, a significant body of published data has proven that a growing presence of worm populations (in multiple species) is resistant to current deworming products. What’s more, the decades-long practice of rotational deworming has likely helped to genetically select for those drug-resistant worms.

“The more we throw anthelmintics at a population of parasites, the more we are going to select for the resistance gene pool in that population,” Morgan says. “It’s inevitable over time, so we can’t stop it from happening. But we can slow it down and prolong a dewormer’s effectivness.”

A big part of doing that is by being more strategic with how dewormers are used in individual horses, and actually using the products less often.

“In the last 20 years or so, we’ve also learned that not all horses in any herd are equally parasitized,” Morgan says. “Only a few carry the brunt of the parasite burden in a group of animals. So, if you have a 40-head herd, it’s probable that only 15 or 20 percent [six to eight] of those horses are carrying about 80 percent of the internal parasite burden. Those individuals are shedding a significant majority of the parasite eggs into the environment.

“If they’re not all carrying the same parasite burden, it doesn’t make good medical sense to deworm them all with the same intensity, as you do in rotational deworming.”

In the past, large strongyles, also called bloodworms, were the biggest threat to the adult horse population. Although they are still present, they have become less common.

Now, small strongyles have become the biggest threat to adult horses. In younger horses, the most common problem is roundworms. Dewormer resistance is most prevalent in those species.

“Regardless, we need to make what we have work and last as long as we can, until the next generation of products becomes available,” Morgan says. “We have to have a new strategy.”

The best answer now, he says, is to deworm less often and more efficiently by using the right product in the individual horse at the right time, both in terms of its environment and a parasite’s life cycle.

“The first step is to identify those high-risk horses—the ones we call ‘high shedders,’ the individuals shedding the majority of the parasite eggs into the environment,” Morgan says. “Once we do that, we can focus more intensely on them versus the rest of the horses in the herd, which are lower risk animals.”

It begins with running a fecal egg count test on each horse to establish a baseline eggs-per-gram count to get an indication of a horse’s specific parasite load.

So, in a 40-horse herd, instead of deworming all 40 roughly four times a year, he suggests deworming the 20 percent who are high shedders four times year, and deworming the rest only twice a year, in the fall and the spring. In addition, the product can be targeted to the specific parasite.

“This way, you are not just throwing dewormer at them,” Morgan says. “And the whole parasite population on that place is exposed to fewer treatments of those products, decreasing the potential for resistance to develop.”

The best time to run a fecal egg count is in the spring, when a horse hasn’t been dewormed for a couple of months.

“You have to have a certain amount of time from the last deworming before you can do a fecal egg count,” he says. “You have to wait for the effects of the dewormer to be out of the horse’s system, allow enough time for the horse to be exposed again and set up an adult worm burden that then begins to shed eggs.”

The timing is different depending on the product used.

“Ideally, you would perform a fecal egg count on each horse each year,” Morgan adds. “That might not be practical. There is not a large amount of data on it, but there are indications that most horses maintain their status as a high or low shedder from one year to
the next.”

“One size does not fit all when it comes to deworming,” Morgan stresses. “A deworming program in Montana is going to look very different from one in East Texas due to climate, geography and parasite burden.”

Management factors, he says—such as feeding horses hay on the ground versus in a feeder—can increase a horse’s risk of parasite exposure. Manure management, stocking density and how often new horses come into the herd also affect parasite risk. Depending on the worm, as in small strongyles, exposure can be greater for horses at pasture than those housed in a stall or dry lot. Exposure risks change with the season, depending on the worm. A targeted deworming program should consider all risk factors along with what is learned from fecal egg counts.

In addition, horses less than 2 years of age should be managed differently from adult horses, and are considered high shedders, or high risk animals. “It’s important to get your veterinarian in the loop on what to do in your program,” Morgan says. “Veterinarians can perform the fecal egg count, they know the parasites’ life cycles and what they are resistant to, and they know the best time of year to deworm.”

“The real goal of any parasite program is not to eliminate all parasites from a horse or group of horses,” Morgan says. “It is to minimize the risk of parasitic disease, control or reduce parasite egg shedding, and slow down, as much as we can, the selection for drug-resistant parasites.

“There is no good reason to waste dewormer on a horse when it is not being exposed to worms, or you don’t know what it has.”

SMALL STRONGYLES: Encyst in the gut wall and cause problems such as diarrhea, weight loss and colic. They are currently the biggest threat to adult horses.

ROUNDWORMS: Primarily threaten young horses less than 1 year old, and cause weight loss, lethargy and colic. The immature worm can also migrate to the lungs and liver, causing signs of respiratory disease.

LARGE STRONGYLES: Intestinal problems they cause include mild to severe colic, weakness and anemia. Larval stages can invade and damage arteries supplying the intestine. They are less common in the adult horse population than they were in the past.

BOT FLY LARVAE: Attach to the stomach lining, and can cause stomach ulcers and gastritis.

PINWORMS: Attack the rectum and cause tail rubbing and itching.

TAPEWORMS: Found in the small intestine, cecum and ileum, they cause colic, anemia and unthriftiness. Tapeworm eggs don’t always show up on a standard fecal egg count test.

The American Association of Equine Practitioners published its current recommendations on deworming in 2013, compiled from more than 20 years of research findings. For information, consult the AAEP Parasite Control Guidelines at aaep.org/info/guidelines.

KENTON MORGAN, DVM, is an equine technical service veterinarian with Zoetis. He received his veterinary degree from the University of Missouri in 1983, and is board-certified in theriogenology (equine reproduction) and has a special interest in parasitology. An active member of the American Association of Equine Practitioners, he is based in Kansas City, Missouri.

This article was originally published in the January 2017 issue of Western Horseman.

Just What the Doctor Ordered

Win the Game Against Gastric Ulcers