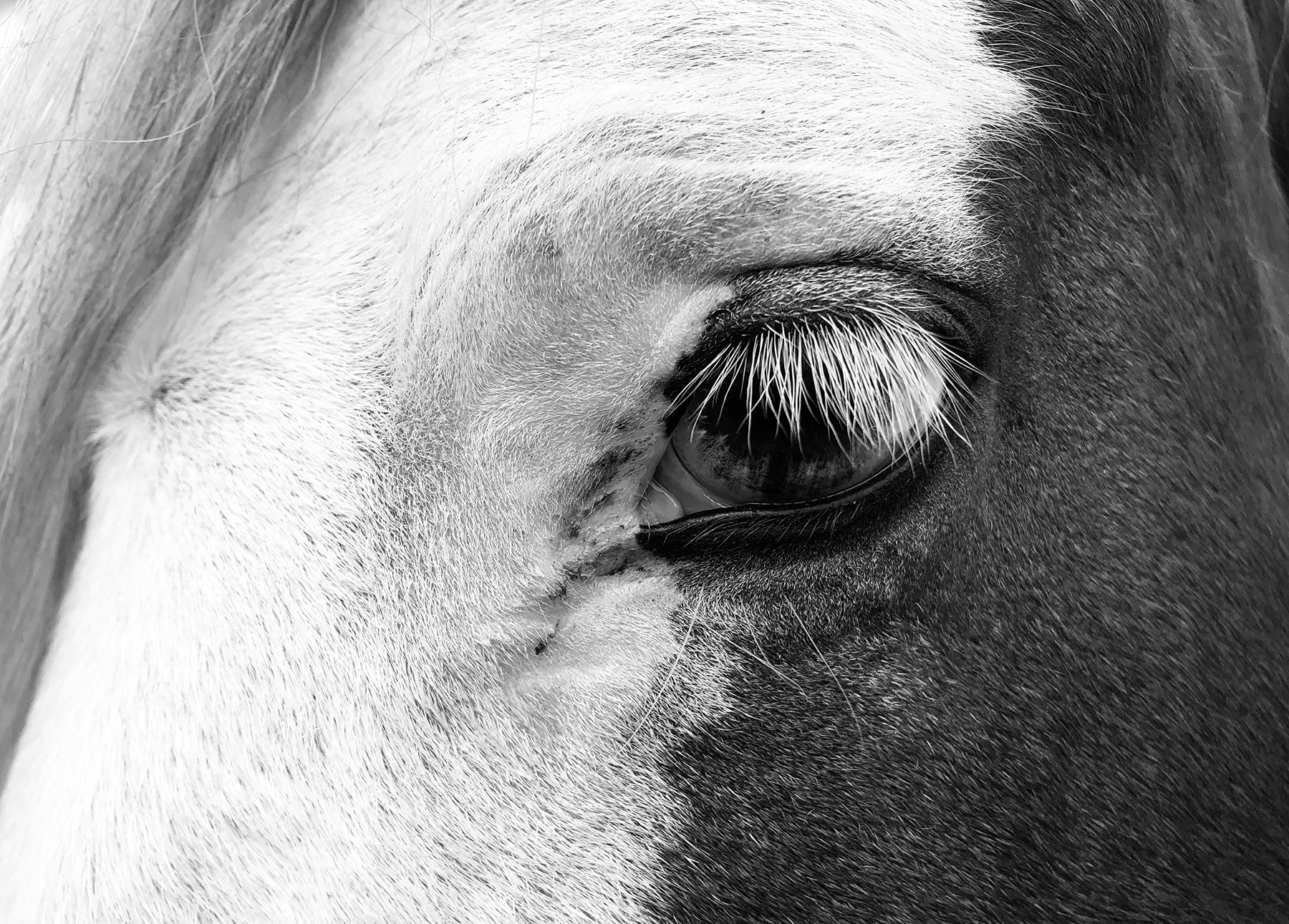 Ever wonder why horses with blue eyes sometimes get a bad rap?

Most cowboys I know have funny hang-ups about things. Call them what you will, quirks, superstitions or personal preferences. But the fact is, there’s often not a lot of reasoning behind their little habits. A lot of folks won’t wear a yellow shirt in the competition arena or rest a hat on a bed. Some won’t hang a horseshoe upside down for fear of bad luck. And some will even sidestep owning horses with blue eyes.

The poor blue eye gets a bad rap in the horse world. There are several terms that reference this trait, including “wall-eyed,” “moon-eyed” and “glass-eyed.” Though some see it as a good omen and a sign of wisdom in a horse, others think it’s bad luck or hints toward a spooky mount. Others are afraid that a riding partner with blue eyes are more prone to disease and problems as the horse ages. I’ve also heard rumors that horses don’t see as well and are more sensitive to light when they don’t have dark eyes. I started reading more about this, as I own a couple of horses with blue eyes, and what I learned is quite interesting.

All that a blue eye really means is that there is a difference in the pigmentation of the iris. The blue-eyed horse lacks melanin in its iris, which causes the light hue. Unlike humans, who sport a spectrum of color choices in their irises, a horse is pretty much limited to brown and blue. Though rare, some even have a combination of the two colors in one eye, which is referred to as “heterochromia iridis.”

To a certain point, there isn’t always rhyme or reason behind the blue-eyed trait. Just about every breed of horse has the ability to produce horses with blue eyes. However, unless it’s genetically a double-dilute coat (perlinos, smoky creams and cremellos), a blue eye is not a guarantee. Sometimes you can breed two blue-eyed horses and have a brown-eyed foal. Sometimes a face marking (baldface or big blaze) can create a blue eye in a horse. And once in awhile, a horse can be sans chrome and genetic predisposition to the trait and have a blue eye.

It turns out that there have been extensive studies done regarding equine eye color. The conclusion is that blue eyes are not any more prone than dark eyes to light sensitivity, blindness or any sort of eye disease. A blue-eyed horse is not any spookier or hindered by their eyesight. If the skin around the eye is light and not dark, a horse can be more susceptible to developing squamous cell carcinoma (a form of cancer). You can greatly curb this risk by using fly masks and sunscreen on the animal.

Blue eyed horses don’t bother me a bit. Sure, some of them make a bigger statement than others. I know that sometimes it’s a risk to own one as an investment, because it can be a bit of a wild card for resale potential. But on the flip side, some people are truly enchanted by this common phenomenon and embrace the fact that a horse is a little different than most others. There’s even an entire breed registry dedicated to the education, promotion and preservation solely of the blue-eyed trait: the Blue Eyed Horse Tracking Registry.

Don’t get me wrong, certain things give me the heebie-jeebies, too. I’m panic-stricken at finding a lump under a horse’s jaw. Also, I’m not a huge fan of riding between a beeping trash truck and a kid on a dirt bike when I’m astride a colt with seven rides total. I’m not keen to leave my hat on the bed—mostly because I’m weird about keeping my bedding very clean.

But a blue-eyed horse? Well, he’s certainly welcome at my place—just make sure to include his SPF 55!

Down in the Dirt