A horse’s best four-legged friend does more than offer companionship.

To a cowboy, it’s hard to find a better friend than a horse. A horse will take you wherever you want to go and often give you a listening ear without much feedback. He’s happy to see you at least twice a day (feeding time!) and he’s generally pleasant company.

But to a horse, it’s hard to find a better friend than a goat.

The friendship between horse and goat has been documented from long ago, most commonly formed on the racetrack. Racehorses have a tendency to be high-energy, sensitive souls, and sometimes the solidarity of a stall makes their lives lonely and stressful. It was common practice for trainers to keep a goat around the stables to befriend and de-stress the racehorses during downtime. In fact, the term “get someone’s goat” is rumored to have stemmed from the practice of rival trainers stealing a racehorse’s appointed goat friend the night before a race, with the thought that the horse would be so stressed out during the night that he would be unable to perform at a high level on the track.

Regardless of how it all began, the evidence is still strong that many horses and goats have an uncanny relationship. I know plenty of horsemen who keep a goat around their barn, be it for companionship, weed abatement or purely for the sake of entertainment. I’ve also heard of  people who have a goat around solely for the purpose of keeping Strangles (a contagious upper-respiratory tract infection common in equines) at bay. I struggled to find any sound scientific evidence to support the correlation between the presence of a goat and the absence of Strangles, but plenty of sensible folks I know swear by the practice and will never be without one.

In fact, my father-in-law, Bryan, once had a goat turned out with his horses for that very reason. He ended up keeping the goat with his freshly weaned foals with hopes that they would stay Strangles-free. Besides keeping the colts and fillies pacified with its company (and keeping them healthy, too!) the goat did one other, amazing thing: he helped get them gentle. The young horses often had a goat running through their legs, sneaking up behind them, rubbing against their sides and even jumping on them and across them as they laid flat. Of course, the weanlings were reactive to all the new activity at first and the little goat was kicked and struck plenty. However, he kept coming back to the feed bunks time and again and the horses eventually became indifferent to the antics and allowed him to play, eat and live amongst them. Bryan attributes that the goat certainly made his job easier when he went to work with the gentled set of horses.

I know that many who have owned a goat or two have plenty of horror stories. Goats have an affinity for jumping on shiny pickups and eating prized rosebushes. They are hard—nay, impossible—to keep within fenced boundaries, and some of them can, well, smell a bit. And though I’ve never actually kept one myself, I’m certainly not against the idea. I like the thought of getting my colts gentler without physical labor. I’d be keen to test out the Strangles hypothesis for myself, and we’ve got plenty of weeds that a staked out goat could do a number on. And as long as I keep my pickup parked in a safe spot, I’m always up for a little extra animal entertainment. 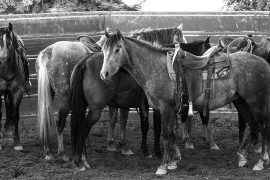