Whether they become what we envision or take a different route, there is great reward in working with young horses.

My 3-year-old snaffle bit futurity prospect has officially flunked out of cow horse school.  And you know what? I’m okay with that.

In the back of my mind, I always feared he was a little too big. I would talk myself into progressing on with him, but he continued to grow (and grow!) He can stop, switch leads and turn around. He is fairly smart on a cow and tries hard. But physically? Let’s just say that the situation became comparable to trying to train an offensive lineman to perform as a gymnast.

I have to honor the time that I’ve put into him and acknowledge that the hours logged will help him in a new career. He’ll make a solid rope horse and a nice turnback horse for me.

But he’s just not cut out to be competitive in the NRCHA, no matter how much I wanted him to be.

But, that’s the risk we take when we send a “prospect” into training, yes?

See, if we wanted to eliminate any uncertainty, we would skip the “prospect” phase and just buy a “for-sure.” Something that has been there, done that and proved itself in whatever arena or discipline we desire. But having a prospect holds the idea that we can bring something along and shape it and mold it into what we want. A prospect is often picked based on bloodlines, movement, conformation and/or the way that it’s been handled and started (and sometimes carries a smaller price-tag than that proven, older horse). There is an undeniable excitement that accompanies the chance for possibilities when purchasing a hopeful.

It would be so simple if all of our prospects matured into what we wanted (more often than not, they do.) Sometimes, though, our horses have abilities that point their careers in a different direction than we had planned. As owners, we need to know when to let our young horses “change leads,” so to speak. It’s not financially viable, nor is it fair, to keep a horse in training for a discipline that they are not capable of.

Sometimes this means that the future together as horse and rider holds something new and different. Occasionally this means that the best chance for the prospect to shine is to continue on with someone else. And every so often, there is thrill and reward when a young horse ends up proving talents beyond what was originally thought.

We’ve started many horses in our 2-year old business over the last few years for people with interests in all facets of the equine world. Often, the trail horse prospects make great trail horses. Ranchers that need a reliable, seasoned mount often have just that by the time their young horse has matured. Many of the performance prospects go on and find success in their specific fields.

But on the flip side, I can think of several instances in our experiences where the horse ended up having a very different career than originally planned. We’ve seen racehorses turn into cowboy mounts. There have been trail horses that ended up becoming hunter/jumpers (and hunter/jumpers that have become trail horses!) A lot of cutter/cow horse “rejects” become jam-up rodeo athletes. Once in a while, a barrel horse prospect grows up, settles down and enjoys life as a mild-as-milk kid’s pony.

As horsemen, it is our duty (and privilege!) to allow our young horses to hone their natural abilities, find their most successful paths and choose their futures.

This means that yes, when all is said and done, my Snaffle Bit Futurity “prospect” has become a “for-sure” using horse.

But, I just so happen to have an up-and-coming 2-year-old gelding that I raised to be simply a ranch horse prospect. However, the more Luke and I have been riding him, the more potential and talent he’s shown in the cow horse arena (did I mention that the Snaffle Bit Futurity just so happens to be down the road in Fort Worth next year?)

Now that’s a future worth getting excited about!

Catching Colts by a Hind Foot 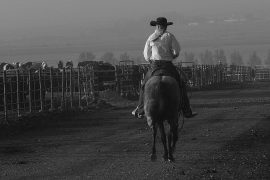 Back to My Senses