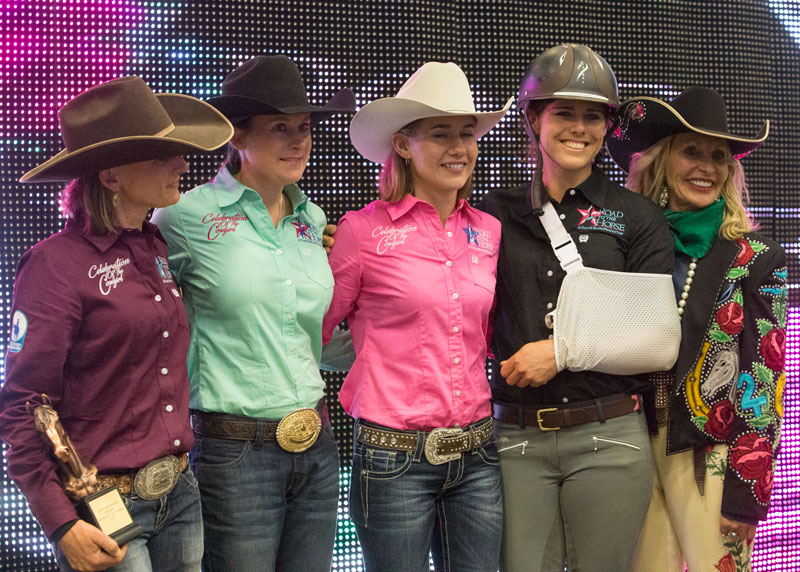 In another history-making Road to the Horse, New Zealand horsewoman Vicki Wilson took the win as the first English discipline competitor in the landmark colt starting competition. It was also RTTH’s first all-female lineup—a celebration of the cowgirl—with Wilson lining up against Kate Neubert, Sarah Dawson and Rachelle Valentine.

“He’s a pretty cool kid,” Wilson said of the 3-year-old Quarter Horse gelding she drew for competition, whom she named “Kentucky.” Bred by the Four Sixes Ranch, an AQHA Best Remuda Award-winner based in Guthrie, Texas, Kentucky is by Boon San and out of Three Eights Bedouin by Royal Quick Dash.

Wilson said it was the colt’s “try”—facing what scared him—that enabled the win.

“He didn’t quit and I didn’t quit, and that’s what ‘cowgirl’ is all about.”

Wilson’s list of prizes includes $100,000. In addition, she purchased Kentucky to take him home with her to New Zealand where he will join her demo string.

Wilson is a champion show jumper and dressage competitor who at age 10 started her first horse under saddle. She works with problem horses and has trained roughly 60 wild horses, including New Zealand Kaimanawas, American Mustangs and Australian Brumbies. She also shoes her own horses.

Her sisters, Kelly and Amanda, are also horsewomen. The Wilson sisters were featured in their own reality TV show “Keeping Up with the Kaimanawas,” chronicling their experience working with New Zealand wild horses.

Road to the Horse ran from March 23–26, 2017, at the Alltech Arena at the Kentucky Horse Park in Lexington, Kentucky. The colt-starting competition features three rounds over three days. It’s not for the faint of heart in horsemanship.

The first two rounds give competitors an hour and 45 minutes in a round pen to halter, handle, start under saddle and begin to work with their 3-year-old colts over obstacles, while also giving the horses mandatory rest sessions.

For the third and final round, competitors have 45 minutes to saddle their horses and complete an obstacle course. They must also complete a rail work portion: walk, trot and lope in both directions, turn, stop and back, and pick up all four feet.

Throughout the competition, judges score contestants on their time management and problem solving skills, consideration of the horse’s welfare, and sound horsemanship principles.

Tootie Bland, RTTH owner and producer, hunts for the right competitors each year to bring to the competition. She was determined that 2017 would celebrate the cowgirl and unite English and Western horsemanship.

“When [past RTTH champion] Dan James called me from Australia and said, ‘I found the girl you’ve been looking for,’ he was right!” she said of Wilson.

Western Horseman is proud to sponsor Road to the Horse as a genuine showcase for good horsemanship. Find more about the competitors in “Cowgirl Road” in the March 2017 issue.