The Professional Rodeo Cowboys Association has initiated creative methods to identify and encourage the next generation of rodeo stars.

“We literally need a membership drive,’’ PRCA commissioner Karl Stressman said at last year’s Wrangler National Finals Rodeo, when the association disclosed that it was down 186 card holders in 2011 compared to 2010. “It will be our No. 1 focus as we go forward.’’

With the pool of today’s ranch-raised competitors having declined considerably, high school, college and rodeo clubs, many of them in suburban areas, now have become the new lifeline for the sport.

One of the things PRCA has done this year is expand a program from its Youth Outreach Initiatives. That has sent Fred Boettcher, PRCA’s bull riding event director, to nine high school rodeos around the country to deliver a 30-minute “PRCA 101’’ session. Five more are planned for this year.

This comes on the heels of a program the association initiated several years ago, where it holds rodeo camps around the country to teach young aspiring cowboys the ropes of being a professional rodeo cowboy. It also provides free membership permits for each high school state and national champion once they turn 18.

Boettcher has made appearances at events in Arizona, California, Florida, Kentucky, Nevada, New York and Tennessee, helping young competitors with topics that include basic introduction to professional rodeo and an overview of all PRCA events and opportunities.

The association already had offered “PRCA 101” clinics at the National High School Finals Rodeo and the College National Finals Rodeo for several years, but the move this year was designed to reach as many students as possible.

“It was determined that since not every kid qualified for the high school finals, there were a lot of talented kids out there who were competing in rodeo and will pursue pro rodeo, [but] who were not able to be part of our 101 educational program,’’ says Julie Jutten, PRCA’s industry outreach manager. “So it was decided to take our 101 clinic on the road.’’

PRCA believes Boettcher is a good person to deliver the message. He was the 1994 National High School Finals Rodeo bull riding champion, and later qualified six times for the Wrangler National Finals Rodeo.

“What helped me a lot when I got into rodeo was that I got in with guys who knew what they were doing,’’ Boettcher says. “They taught me how to travel, how to enter events—all important parts of becoming successful. That’s what I’m trying to explain at these clinics, trying to teach them about the right way to get involved in rodeo.

“I also would like to see more [PRCA] members be an influence on younger kids. We want the kids to see that there are bigger and better things after high school rodeo. It’s a tough sport, but there are a lot of rewards. It’s a matter of building dreams.’’

He says the PRCA 101 program is designed to educate future members of the association.

“There’s a generation gap out there. You just don’t have that many ranch-raised cowboys these days,’’ Boettcher says. “A lot of people who show up at these clinics competed in rodeo when they were young, so now they want their kids and grandkids to get interested in it. And they want them to do it the right way and get some help.

“We want to encourage them to take advantage of the opportunities provided by the PRCA. They need to know that they don’t have to start at the top. They can use the Circuit System and All American Series to climb the ladder to success. I try to let them understand how to be successful in their rodeo career by sharing personal stories. Many can relate to them.’’

It’s still too early to judge the impact PRCA’s initiatives have had on future membership, but Boettcher says the program has been received better than ever anticipated.

Jutten says that so far most of the programs have been aimed mainly at youth from ages 10 to 15, and those young people are just now becoming age-eligible for membership. To further reach as many kids as possible, Jutten employs the same social media they use, including Facebook, MySpace and Twitter.

The rodeo camps, which were first held in 2009, have become a popular tool to reach young contestants who are thinking about becoming professional rodeo competitors. This year the nationwide program hosted camps in nine cities, ranging from Fort Worth, Texas, to Prescott, Arizona. Jutten says PRCA plans to expand that number to 20 in 2013.

“It’s a condensed camp with no live buck-outs,’’ he says. “We try to teach them the basic fundamentals of riding bucking horses in a safe environment, using bucking machines. Eighty to 90 per cent of the students are of high school age. We try to teach them how important school is so that they can eventually move on to college and compete there. We also try to let them see the business aspect of professional rodeo.”

Hawkins says the camps are geared to provide free learning opportunities for cowboys just starting out who either had little or no direction in rodeo or have been competing in rodeo and want to learn more about the fundamentals from PRCA members. He says he also holds free clinics at the North Texas High School Rodeo Association, of which he was a former member.

Jutten says the rodeo camp is set up to be a kind of mentorship program for youth who want to get started in rodeo but have no idea how. The program was launched in 2009 when stock contractors John Barnes and Maury Tate came to PRCA with the idea of doing rough-stock ground schools to give young competitors the opportunity to learn about rough-stock events while staying focused on the fundamentals of technique and safety.

Since then the program has tried to provide the students a picture of what it’s really like to try to make a living as a rodeo competitor, which is a lot different than trying to succeed in other sports such as football or baseball.

“If you want to be successful in the PRCA, you need to set goals for health and fitness, goals for competition and practice,” Jutten says. “It’s important that the kids see themselves as athletes and train like they are athletes.”

The program is offered free and the curriculum has been developed by PRCA, rough-stock contestants, and sponsors Justin Sports Medicine and Barstow Pro Rodeo Equipment.

Jutten says a big part of the camps so far has been trying to help kids learn to get the right equipment to help them be successful.

The smaller number of youth raised in rural areas also has a lot to do with it. There are just not enough people out there today who grew up on a ranch and learned how to ride a wild horse at an early age.

Former world champion Deb Greenough of Red Lodge, Montana, believes the problem stems from the lack of instruction on how to use the equipment.

“You know, when I first started the riggings were a lot different. Nowadays they are either leather or rawhide, and they are a lot harder.’’

Greenough said today’s riggings sit higher on a horse, which positions the riders farther back during the ride, and that causes soreness in the rider’s arms and neck.

The soreness happens because “they haven’t learned how to use their feet,” he says. “To be consistent, you have to stay squared. Shorten that spur lick and get ahold of something and stay in control, rather than just being wild with your feet and taking it all in your neck, arm and shoulder.

“The rule states that you ride with one hand, with the other free hand in the air for eight seconds, but basically you have two good feet that you should be using; otherwise you won’t last,” he added.

Overall, PRCA officials hope that learning the ropes the right way through knowledgeable instructors will help young contestants become successful professional competitors. That’s why PRCA believes its new outreach programs will eventually do just that, and bring in more members to the association.

Top 10 Shots from the NFR 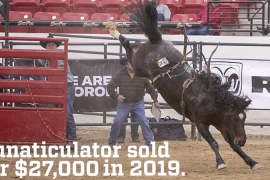