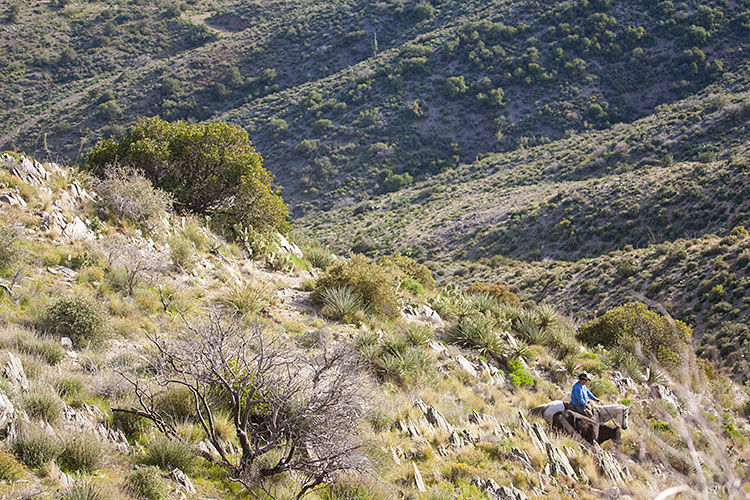 By midday, Kyle and Wheeler are each leading a cow toward camp. But while Travis and George work to hook one to Cinderella, not all is smooth sailing. Riding alone, Wheeler gets in a bind as his yearling bull turns and knocks his horse off balance. Wheeler finds himself under his horse with his foot hung in the rope. The bull delivers several blows to his face before Wheeler gets back in the saddle and regains control of the situation.

“She’s pretty much unshockable,” Travis says. “At first she’d always be worried about me. But she never tried to talk me out of this. She realizes that this is what we do.”
Travis and Wheeler’s passion for wild cow catching is practically genetic. Their father, who has chased cows for a lifetime, often rides with his two boys at age 70.

“He can’t get enough of it,” Travis says with a laugh.

For the Ericssons, the thrill of the chase trumps every other hardship.

“No matter how bad the situation, it never got too bad for Dad,” Travis says. “One time, it was midnight and snowing hard. We were leading bulls and still had eight miles to get to the house. He said, ‘This is living. Better than working at Circle K.’ He was the eternal optimist.”

Cinderella is out of gas before Travis makes it back to camp with the cow hitched to his saddle. With Kevil’s help, he ties the cow to a tree, unsaddles and waits for someone to bring his 2-year-old grullo, which has been tied up most of the day. Usually, Travis has more horses to ride, but a few days ago he sold some. These days, it’s best to not turn down an opportunity to sell horses.

With a fresh but green mount, Travis joins the rest of his crew, waiting at the top of the pass overlooking the steep climb they made earlier that morning. The wind whips around their hats as one by one they steer their horses down the rocky route. Kyle leads two cows downhill.

“It takes a really good hand to wait and be patient with those cows when leading them out,” Kevil says. “Especially when you have more than one cow.”

The men slowly pick their way around bushes and boulders that stand up like tombstones. They finally reach the bottom and head for their stock trailers. With a lot of yelling, arm-waving and banging metal gates, the crew loads all five cows.

When providing their services to individuals, Travis and his crew usually get 50 percent of each cow’s market price. However, when they contract with the Forest Service, they are paid by the head. For this trailer load, they will receive a grand total of $750.

It was a short, two-day job, but they’ll be back. For now, they light campfires, grill hot dogs and enjoy their perch, high above the bright lights of Phoenix.