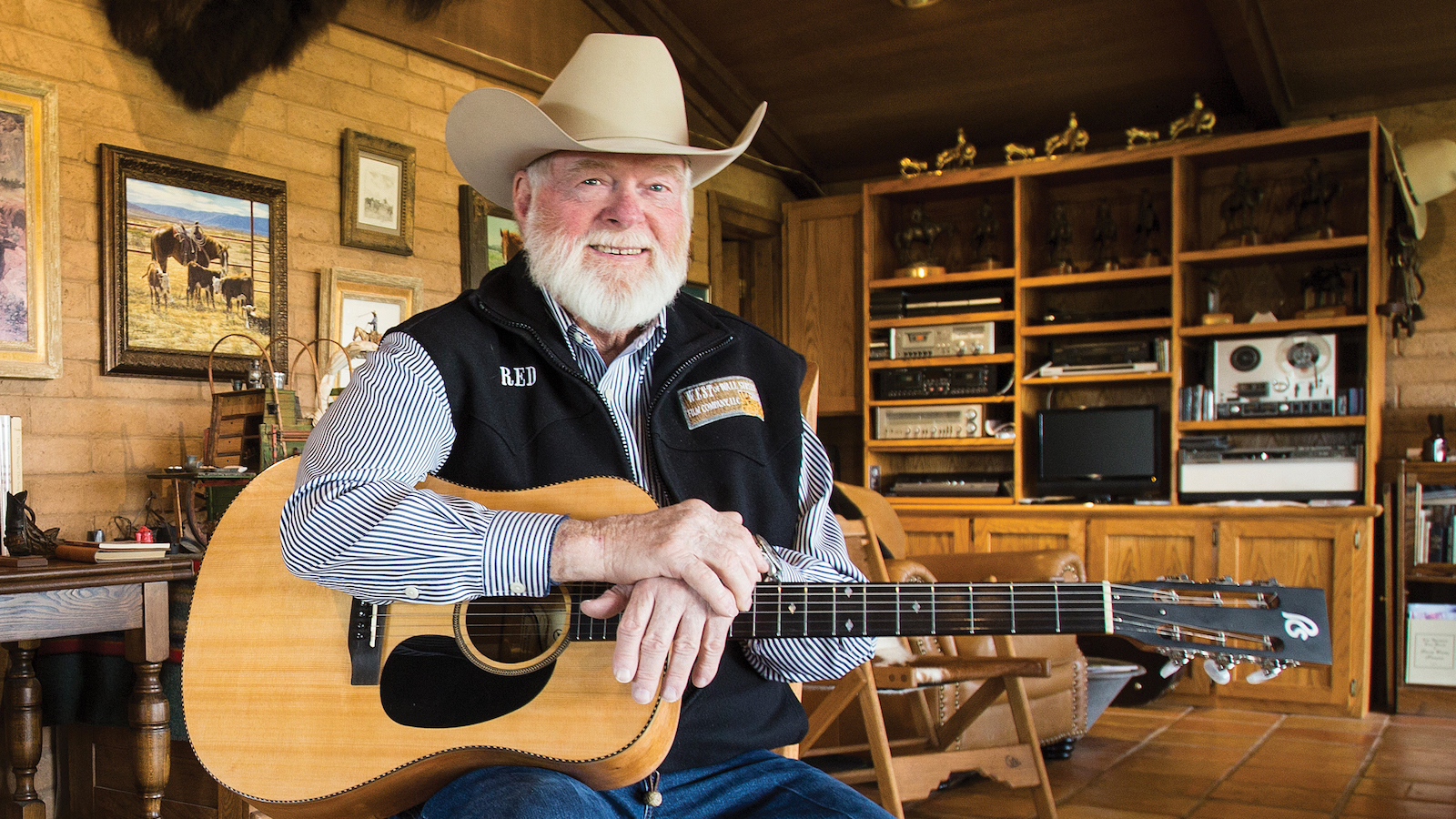 For Red Steagall, the Western music and cowboy poetry he performs do much more than entertain. They promote and preserve one of America’s most valuable assets.

As a boy, Red Steagall was captivated by the sight of cowboys riding through his little town in the Texas Panhandle. The horseback crew occasionally passed through Sanford, Texas, headed to work cattle in the rugged country along the Canadian River. Red and his younger brothers would stop what they were doing and soak in the scene.

“Boy, we always wanted to go with them,” Red says. “And I can still see them in my mind just as plain as if it was yesterday.”

The town of about 100 people sat in the middle of the Sanford Ranch, located on the harsh, windblown Panhandle plains. It’s where Red grew up, learned the value of being resourceful and resolute in desolate situations, and gained an undying admiration for people who make their living on ranches and farms throughout America.

“Our agricultural society is our country’s most valuable asset,” he says. “Think about this: It wouldn’t make any difference how vast our armed forces are, how fast our technology is, how comfortable our cars and homes are. If we get to the point where we import all our Foodstuff, nobody will have to fire a shot inside our country. All they have to do is conquer the country that’s feeding us.”

At age 79, Red continues to pay tribute to agricultural life and ranching traditions through his songs, poetry, concerts, radio program, television show and wildly popular Red Steagall Cowboy Gathering & Western Swing Festival, held every October in Fort Worth, Texas, for the past 27 years. His radio show is carried by 155 stations in 34 states. Each year he records 26 new episodes of his television program, Somewhere West of Wall Street, which appears on RFD-TV. He writes a column each month for Cowboys & Indians magazine. During 2017, he performed on average three musical gigs each month—the most he’s toured since the 1980s.

“I think the television show has something to do with that,” he says. “The visibility is better.”

Red has held celebrity status since he began recording country music hits like “Lone Star Beer and Bob Wills Music,” released in 1976. Although his decorated career has taken him all over the world, his fascination with rural America and the ranching lifestyle remains as gripping as that boyhood moment when he watched the Sanford cowboys riding toward the Canadian River.

Born in Gainesville, Texas, in 1938, Red was 3 years old when his family moved the 300 miles to Sanford. His father, George, began working for an oil company, and in the following years worked a variety of jobs, doing “whatever he could to make a living,” Red says. His mother, Ruth, was a public school teacher.

George and Ruth had have boys and one girl; their first child was a red-headed boy they named Russell Don. “Red’s” childhood was undoubtedly country, even though the Steagalls lived in town.

“I spent almost all my time in the river bottom on the south side of the Canadian River,” Red says. “Outdoors was my whole world.”

Sometimes Red and his brothers rode down by the river on horses they borrowed from a kind neighbor. The only horse they ever owned was a palomino gelding they purchased that had been bound for the slaughter plant.

“My little brother Carroll decided he wanted a horse, so we walked down the river about seven or eight miles to a man who had horses that nobody else wanted, and he was going to take them to the killer sales. And there was a palomino that Carroll just fell in love with. He had a hoof cracked almost all the way up to the pastern. The man said, ‘How much money you got, Carroll?’ ‘$75.’ He said, ‘I’ll take it.’

“So we led that horse back up the river. We spent every afternoon after school soaking that foot in kerosene and used crank-case oil, until we softened that hoof. And over time it grew back out.”

The horse, named Tony, turned into a steady mount for the Steagall boys. Other dealings with unwanted horses didn’t materialize as smoothly, but served as a good source of boyhood fun. A group of wild horses turned out by ranchers roamed the river country, and sometimes they wandered into town, and the Steagall boys and their friends would try to catch one and ride it. One time they managed to get a rope and a saddle on one of the younger horses, and one of Red’s friends hopped on.

“He threw him off and got away,” Red says. “We never tried that again.”

According to Bruce Greene, a member of the Cowboy Artists of America and a close friend, the Steagall household was far from affluent. The blowing wind seeped into the house, and on some mornings Red woke up with a thin layer of dust or snow on his bed covers.

“Red puts his boots on before he puts his pants on,” Greene adds. “The reason is that linoleum floor in the house would be so cold, so he’d put his boots on, get up and then pull his pants on over them. He still does that to this day.”

In high school, Red played football and planned to go to college and become a veterinarian. But in 1954 the course of his life made a dramatic shift. His parents divorced in August, leaving Ruth with five children and one on the way.

In September, Red woke in the middle of the night with a fever, chills and excruciating pain in his head. At the hospital he was diagnosed with polio, four months before the Salk vaccine for the disease was available. Four days after his diagnosis, Ruth gave birth to Red’s youngest brother, Danny.

The disease severely weakened Red’s left arm and hand, and he permanently lost the use of his left shoulder. Ruth bought a secondhand mandolin to help him rebuild the strength in his fingers.

“My fingers were just like pieces of spaghetti,” Red says. “Mother bought me a mandolin—paid it off a dollar a month. It was a $10 mandolin. For days I would concentrate on getting enough strength in one finger to keep from muting the strings. And I went all the way through each finger on my hand, doing that on that mandolin until I could play a two- or three-finger chord. And then Mother helped me buy a guitar for my graduation, and I took that with me to college.”

Although Red graduated college at the urging of his mother, earning a degree in animal science and agronomy from West Texas State University, he discovered that music was his true calling. During college he began writing songs and formed a country band. He continued playing at rodeo dances while working for five years as an agricultural chemist.

Some of Red’s friends he’d met through music moved to Hollywood to pursue careers in the entertainment business, and with their encouragement he followed suit in 1965. Red began working as a music industry executive, including a stint with United Artists Music. In 1967, Ray Charles recorded “Here We Go Again,” co-written by Red Steagall and Don Lanier. The song became a hit in the United States on the Billboard Hot 100 chart.

“My whole world abruptly changed, and I concentrated on writing songs,” Red says. “From 1966 to 1969, I had 60 of my songs recorded by other people. And then I started recording myself. My music took me all over the world.”

During the 1970s and 1980s he released a steady lineup of albums, and more than 20 of his singles landed on the country music charts. His most successful hits include “Party Dolls and Wine,” “Somewhere, My Love,” “Someone Cares for You,” and “Lone Star Beer and Bob Wills Music.”