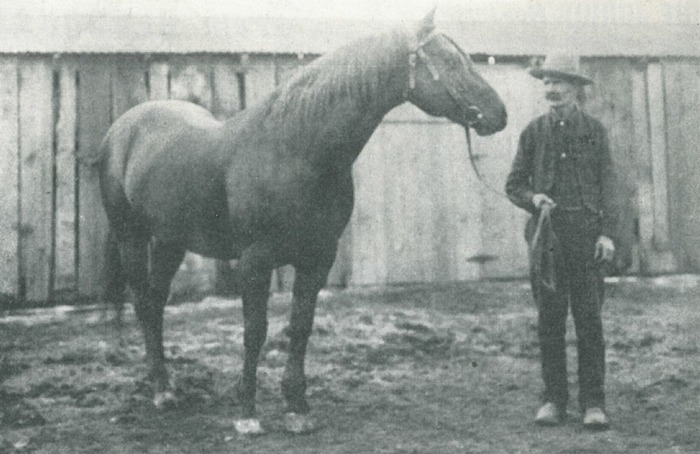 Peter McCue: The Greatest of the Great

There ain’t no ifs nor maybes about it–he was the best.

By Craig Phillips, as written in March 1949.

I have worked with horses all my life. I have seen or ridden most of the old-time short horses, including Peter McCue, John Wilkens, Cowboy Hoover, Jack Dempsey and Lady of the Lake, and of all the hodge-podge of half-truths, garbled misinformation and plain and fancy poppycock I have come across in a long long while, that Traveler article in the January issue of this magazine sure takes the cake. Sires of Speed, indeed! I can remember Traveler when he was hitched to a wagon and he never saw the day when he could outrun or out-breed Peter McCue!

Peter McCue was the greatest Quarter Horse of all time. There ain’t no ifs nor maybes about it–he was the best. For pretty near half a century speculation has been rife concerning the question of his parentage, not on the tail side for everybody knows his dam was Nora M by Voltigeur and out of Kitty Clyde. That end of his background was all TB; it was the identity of his sire which disturbed so many people.

Peter was registered as a Thoroughbred and his sire, as given, was Duke of the Highlands, one of the registered Thoroughbreds owned at that time by his breeder. He was bred and foaled at the Little Grove Stud of the Watkins Brothers in Petersburg, Illinois. To me it seems highly likely that the Duke actually was Peter’s father.

The Duke was a line-bred grandson of Bonnie Scotland, one of the greatest sires of running horses ever known to the American turf, a contemporary of Glencoe and Himyar (sire of Domino).

Bonnie Scotland was imported in 1857 from England where he was foaled in 1853, a product of the W. L. Anson establishment. He was a very striking looking horse of much beauty and amazing power. His two greatest sons, Luke Blackburn and Bramble, carried his line on after his death in 1880. The most celebrated of this pair was Bramble, greatly resembling his sire and a horse of much substance whose male-line descendants are represented today through the families of Broomstick and Sweep. The great stallion Ariel is a grandson of Sweep.

So much for Peter’s sire, according to the Thoroughbred record. His dam, Nora M, it might be mentioned in passing, was a line-bred great-granddaughter of Glencoe.

Considering Peter McCue’s splendid record of performance, both on the track and in the stud, I am willing to accept his parents as registered.

There are, however, a few circumstances which would seem to support claims recently refurbished that he was the son of Dan Tucker. Coke Roberds, for instance, has been quoted as saying he was not a clean-bred horse. There is also, in the archives of the American Quarter Horse association, an affidavit signed by one Cassity to the effect that Peter McCue was “sired by the Quarter Horse, Dan Tucker.” This deposition was taken in Oklahoma on the 16th day’ of December, 1942. Also I have heard that Bill Welch, of Kremmling, Colo., and St. Louis, Mo., went to Petersburg, Ill., and talked to the Watkins family and was told that Dan Tucker was Peter’s sire.

Dan Tucker was a very dark bay or light brown, carrying large dapples in the bay color over his loins and hips. He stood close to 16 hands and, in normal condition, would weigh about 1250 pounds. He was a perfect specimen of horseflesh, his legs, neck and head, in fact his whole body, were of just the right size. He had a beautiful head with small ears and the right size nose and well-shaped jaws that were not too heavy. His legs were especially good, of right size and type; his front legs were not too wide at the body, his hind legs were straight, but not overly so, and his action was really machinelike. That my own good opinion of Dan Tucker’s appearance is not overrating him is easily borne out by a remark once made to me by Mose Newman whose Dad owned the horse during the last years of his life. Said Mr. Newman: “I have seen many Quarter Horses and the best Thoroughbreds that have been produced for the past fifty years, and I cannot recall that I have at anytime seen a horse that I thought was a more perfect specimen of horseflesh than the renowned Dan Tucker.”

He was bred by Sam Watkins of Petersburg. His sire was Barney Owens and his dam was Butt Cut by Jack Traveler. He ran long races and was not a popular track-burner; indeed, more often than not he got beat. He was entered in mile races and in 1892 started eleven times and won but once. He was very definitely a Quarter Horse.

But the quarter mile was Peter’s dish and at that distance none ever passed him. He was many times clocked in twenty-one flat and Coke Roberds, who owned him last, declares: “Peter McCue was unquestionably the greatest sprinter and sire of short horses that ever lived.”

Let’s give the old horse his due. He stood 16 hands and weighed 1430 in racing condition, so don’t let them tell you a big horse can’t run. He was a dark bay, like Dan Tucker, and foaled in 1891. He was a wonderful starter and had tremendous power like the Glencoes. His stride, when he got rolling, was 27 feet. He never got excited and he was a wonderful breeder. Milo Burlingame says, “I think he was the greatest ‘short-horse’ in the history of the world, and also the finest breeder.” John Wilkens, the man, declared Pete was the greatest breeding horse he ever saw.