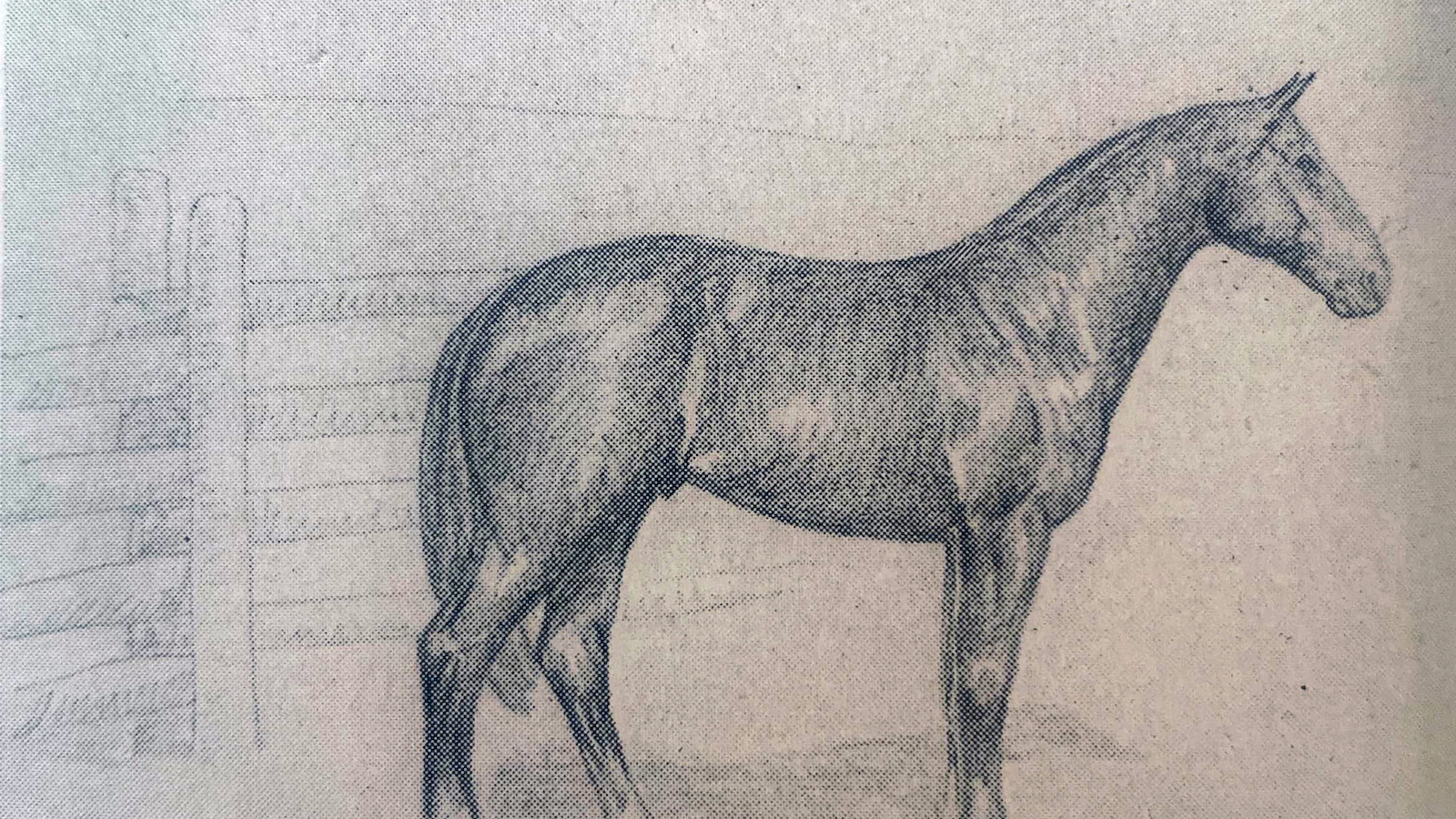 The Texans had a horse, of which they were justifiably proud, as his equal in working cattle had never been bred.

Coming to Mexico first with that bow-legged stockman, Cortés, the Texas horse had followed the Spanish cattle ever northward until he found what was a heaven for horses in the plains of Texas. For three hundred and fifty years these horses had been working with cattle and when they reached Texas they were a race of animals capable of unbelievable feats of endurance and endowed with a cow-sense seemingly inbred in the race.

The Texans, typical horsemen, would bet their last shirt on the prowess of this horse and the stage was all set for the appearance of the Steeldust, one of the best Quarter horses ever bred.

The stories of his arrival are so numerous and varied that one can only take the similar features and weave from these an outline of the tree story. Seemingly, someone in Texas had a horse he was mighty proud of and his fame spread as he defeated all comers. Many of the reports give his name as Shilo, while other say Shilo was another Quarter horse which had come into Texas.

Anyway, at this time, Steeldust arrived. It is possible that someone had brought him with the express purpose of defeating the Texas horse, but, what is more likely, is that his owner was just on the move. We do know that sometime in the early 1800’s Steeldust was matched with a champion Texas horse. Steeldust’s quiet demeanor disarmed the natives and the thorough defeat of the Texas horse very nearly bankrupted the community. From then on Steeldust was made. Every Texan who had a good mare wanted to breed her to Steeldust.

Steeldust’s Spanish blood mingled with the Texas blood and all of his urge to work with cattle, which had been recessive, came out in this new cross. Steeldust and his get created a marked improvement in the conformation of the Texas cowhorse without detracting from his cow-sense and stamina. The result was the best cowhorse the Southwest had known. Now the cowhorse of Texas had added weight and a fresh burst of speed without any loss of that intuitive cow-sense which the centuries had bred in the Spanish horse.

Another important Quarter horse family which exists today is the Billy horse. The descriptions above describe the Billy horse more accurately than they do the Steeldusts. The Steeldust mounts up better in the shoulder and withers with a better set to the neck. To the casual observer, he might more closely resemble a compact Thoroughbred than would the Billy horse which might by the same observer be taken for a Morgan. Steeldusts, however, do not resemble Thoroughbreds. Doubtless, devotees of both breeds would object to such a statement. Steeldusts are shorter in the neck and shoulders, more compact and closer to the ground. The forearem of the Thoroughbred is not so heavily muscled. Seemingly, the Steeldust has more muscle on the outside of the legs while the Thoroughbred is muscled better on the inside.

Steeldusts have the smooth and compact shape, short back and deep barrel of the Quarter horse, but the unusually heavy musculature which stamps the breed, seems to reach in the Steeldust a peak which “amounts to almost a deformity in his bulding jaw.” This also explains why the Steeldust strain is occasionally referred to as “Big Jaws.” Anson termed it a “Coarseness of the head.” Dan Casement says, “These massive jaws seem to serve as a fitting symbol of the tenacity and determination which mark the Steeldust strain. They make a strange contrast to the alert little ears that denote the keenness of the horse’ sensibilities, and furnishing a substantial background for the forehead and eyes that bespeak deep stores of equine wisdom.” Those who are acquainted with the Criollo Horse of the Argentine will see a striking resemblance in the two animals.

Steeldust was undoubtedly the first Quarter horse to make a marked impression on the cowhorses of the Southwest. Other strains of the Quarter horse, as well as different members of the Steeldust’s family, have established branches of the Quarter horse family in the Southwest. Some of the better known are the Steeldusts and Billy horses mentioned above, Cold-Decks, Printers, Londos, Copper-Bottoms, and the Blake horse. All are offshoots of the main Quarter horse family. The Blake horse is of the “Cold-Deck” line of “Steeldusts” and was developed by S.C. Blake of Pryor, Oklahoma. Major Cullum of the Remount Service has stated they are the best Quarter horses he has ever seen. In 1921, Mr. Blake presented the Remount Service with a Quarter horse called Tramp. Tramp was by Tubal-Cain by Cold-Deck by old Cold-Deck by Steeldust. The dam of Tubal-Cain was by Alsups Red Buck.

The earliest stockman to capitalize and breed Quarter horses was William Anson of Cristobal, Texas. Billy Anson came from an aristocratic English family, and, like so many of the younger sons of the English nobility, came to the New World during the last half of the 19th century to seek his fortune. It is said, that although he became a real westerner in the best sense of the word, he never lost his accent or English manner.

Anson got his first opportunity to collect Quarter horses when he was buying horses for the British government during the Boar War. While gathering large numbers of horses he was able to obtain for himself a number of excellent Quarter horses, particularly of the Steeldust stamp. With these as a base, he began to breed them on his Head-of-the-River ranch on the Concho. Perhaps the outstanding stud which he produced was Jim Ned. Jim Ned sired two very famous colts, one was Brown Jug who was sold to the Correllitas Rancho in Chihuahua. Pancho Villa raided the Correllitas later and appropriated Brown Jug for his personal mount. Concho Colonel was the other well known son of Jim Ned and more appears on the Colonel below. Anson wrote several articles on the breed, being one of the first men to study the history of the Quarter horse, and blood of his horses is found in most of the Quarter horse studs of the country.

Casement bought the Colonel from Anson, his sire being Jim Ned, Anson’s famous horse. Concho Colonel was a half-brother of Brown Jug. The Colonel was taken to Casement’s ranch in the Unaweep Canon close to the Utah line. Colonel worked cattle and handled his yeguada of mares until he died at the age of 22. He left 139 foals, some being kept but most of them going to owners throughout the country. Concho Colonel’s colts were stamped with the typical Steeldust conformation. So marked was this uniformity that Casement said he had never seen it equaled by any horse.

Some of these colts gave good account of themselves. Fireball, foals in 1914, out of a thoroughbred mare, was several times champion polo pony at Santa Barbara while owned by Lafayette Hughes of Denver. Rosky, a year younger, foaled by a Texas cowhorse (Mustang-Mare) not only played polo in France but also was hunted on the Atlantic coast by Frederick Prince. Concho Colonel begot his best colts through Spanish mares.

Casement sold the majority of his horses after the War but in 1923, through a partnership with Ed. Springer of the CS Ranch of Cimarron, New Mexico, he continued breeding. With this partnership came mares with blood of the celebrated Steeldust, Little Joe. Some of the more famous of his colts coming from CS mares and the “Colonel” were Coleen, who won the Grass Riders’ Grub Stake at Fort Riley, and Clipper, medal pony of the 11th Cavalry Club of Monterey.

Concho Colonel was growing old and Casement began looking for a fitting successor to continue the strain. He found the dam he wanted in a Walker mare, twelve years old at the time of purchase. Named Little Judge, she was by Little Steve out of Sal by Grey Joe, and, as Casement so aptly puts it, who could ask for a more mellifluous Quarter Horse pedigree. Balleymooney was the colt she produced by Concho Colonel and he represents the best sire Casement developed. He lived 19 years producing many fine colts. Deuce, who is still alive and at work for Casement, was one of Balleymooney’s best sons. Two other outstanding sires from Balleymooney are Frosty and Red Dog.

Writing to the present author in 1938, Dan Casement said, “I still have my Steeldust stud, the Deuce by Balleymooney. To him I breed every year three daughters of his grandsire Concho Colonel, one of his half sisters, a Thoroughbred more, and two granddaughters of Senator. With their progeny we work out cattle here. There are the only horses any cowman should ride.”

Today Casement’s son, J. S. Casement, who owns the Waterfall Ranch at Unaweek Canon, Colorado, is breeding these horses. He owns some of the best bred Quarter horses of the Steeldust strain in America, most of the se being sired by Red Dog or Frosty, both grandsons of Jim Ned.

Duwain E. Hughes of San Angelo, Texas, also has Quarter horse blood of Anson breeding. His stud, Hiram Baker, Jr., 1921, is by Hiram Baker (a Billy Anson horse) and out of a Sam Jones mare that was by Yellow Wolf. Hiram Baker was by Peter McCue and out of a Quarter mare that had a wonderful racing record. Both Yellow Wolf and Peter McCue were used extensively by W.T. Waggoner to breed the Quarter horse that the DDD Ranch is so famous for. The best of the Hughes stallions and mares are of Anson or Waggoner breeding except a young stud of “Billy Blanton” stock, called Doc. Doc is the best type Quarter horse the present author has seen. Hughes is the biggest breeder of Quarter horses in the United States today, having collected some three hundred Quarter horses over a period of years. His colt crap this year has real promise.

W.D. Wear of Wilcox, Arizona, has some very fine Steeldust blood, his stud, Tony, bearing the blood of the two famous Arizona studs, Guinea Pig and Possum. Tony is by Guinea Pig who was by Possum, and out of a mare by Bulger. Tony is one of the most beautiful Steeldusts alive today as the pencil sketch accompanying this article by Zelman shows. Possum and Bulger were great Steeldust stallions shipped from Texas to Arizona by the Kennedy Brothers. Tony and many of his colts won blue ribbons at Tucson Livestock Show.

R.L. Underwood of Wichita Falls, Texas, has some excellent Quarter horses. His best stud is Chief, a Copperbottom horse. Dexter and Silvertone, who curiously enough is a beautiful Palomino, are two of Chief’s promising young sons.

There have been several efforts, the last led by J.S. Casement, to establish a stud book for the Quarter horse. This idea is not only meritorious but deserves action. Any breed of animal with the abilities and heritage of the Quarter horse should be preserved and bred. A few years ago there was an article in the “Breeder’s Gazette” by an owner of a Steeldust horse whose name was Old Nick. The owner was, to put it mildly, “griped” because the laws of his state (Colorado, I believe) forbade the services of studs that were not registered. This author is not attacking this undoubtedly wise provision, but, merely pointing out the need for a stud book for a horse which carries in his blood all those qualities considered by many ranchmen of the Southwest as those most desirable in a cowhorse.

This article was written by Bob Denhardt and originally published in the March-April 1939 issue of Western Horseman.