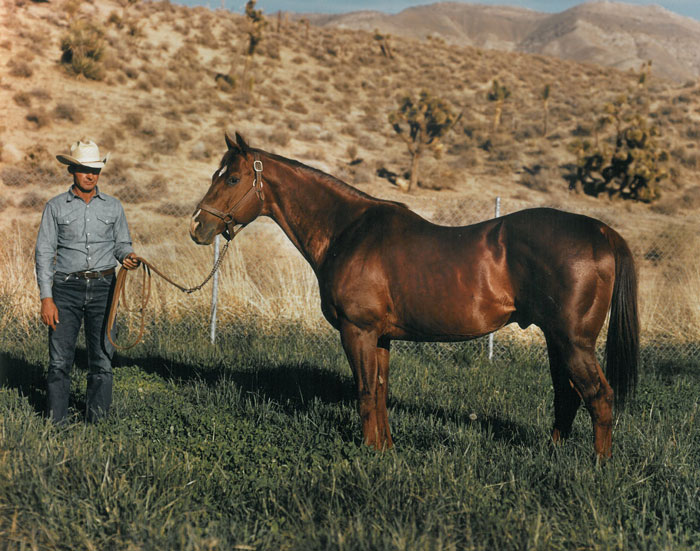 The narrative of Sid Vail and his famous horse, Three Bars, reads like a story book.

It’s a “rags to riches” saga whose last chapter has yet to be written. Records reveal that Three Bars sired his first in 1945. They named him First Bar and he was the first of a long line of winners that are going strong.

That was almost 20 years ago and Three Bars at the mature age of 23 is still a prepotent sire. Sid reports that his handsome stud settled 33 mares in the 1963 season. The fee is $10,000 per service and that adds up to a lot of hay in any man’s language.

Three Bars, a straight Thoroughbred, has crossed well on both Thoroughbred and Quarter Horse mares. But his greatest claim to fame is the manner in which his get have dominated the field of Quarter running horses. A recent tabulation reveals he has sired 258 starters who have won over $1,800,000, which is more than double his nearest competitor.

In the 1957 running of the Pacific Coast Quarter Horse Futurity, the first five horses to cross the finish line were own sons of Three Bars. In the 1962 Los Alamitos Futurity, ten horses were loaded into the starting gate to race for the largest single purse ever contested for in California – $207,750. Of the ten starters eight carried Three Bars bloodlines. Jet Deck, the winner, was by Moon Deck out of a Barred mare by Three Bars. The record is endless and the number of top horses sired by Three Bars gets longer each year. A partial list of Three Bars sons and daughters would include Alamitos Bar, Bardella, Tonto Bars Gill, Galobar, Triple Chick, Gold Bar, Miss Bar Leo, Miss Myrna Bar, Pokey Bar, Sugar Bars, Josie’s Bar, Barjo and Barred.

Now comes the flashback. The scene shifts to a small track in the middle west. The date is 1944 and a man named Mr. Stivers is examining a Thoroughbred named Three Bars. Stivers had recently acquired the young colt for $300, but at that moment he was wishing he hadn’t. The colt pulled up stiff in the hindquarters. Stivers decided to get rid of him on the spot and gave him away “free gratis.” Three Bars had bloodworms that could have been cured with one treatment, but that was 20 years ago and they didn’t know much about the many parasites that made life miserable for horses.

The horse changed hands several times after that and then became the property of Cal Kennedy,’ Toad Haggard, and Stan Snedigar who picked him up in a claiming race. The colt was running pretty good, but showed a tendency towards lameness so they decided to doctor his knees and ankles and give him a good rest.

While all this was going on a Texas cowboy named Sid Vail was buying a small cow outfit in Douglas, Arizona. Sid was about 30 at the time and had just recently acquired a beautiful darkhaired bride with the fascinating name of Mayola. Sid had knocked around some and had picked up that sure touch around horses and cattle. Things hadn’t been easy for Sid, but he was beginning to make out all right. He had started at the bottom as a $40 per month cowpoke, then broke out cow ponies in Hawaii before he started to ride steers and broncs on the rodeo circuit. He hunted lions and ran the pack trains for the government when they were making a survey of Yellowstone Park.

By the time the Vails had bought their outfit in Arizona; they had a few dollars saved, but whenever they got money ahead it was usually spent on a fast horse or two. In fact they had a few that could run a bit, but Sid was constantly on the lookout for the horse that could really do him some good.

Sid had been hearing about a young stud named Three Bars that had been burning up the track at the old Phoenix Fairgrounds. So he decided to go up and take a look as he had a couple of mares he wanted to breed:

That look marked a decisive turning point in the lives of the Sid Vails, because he sure liked what he saw.