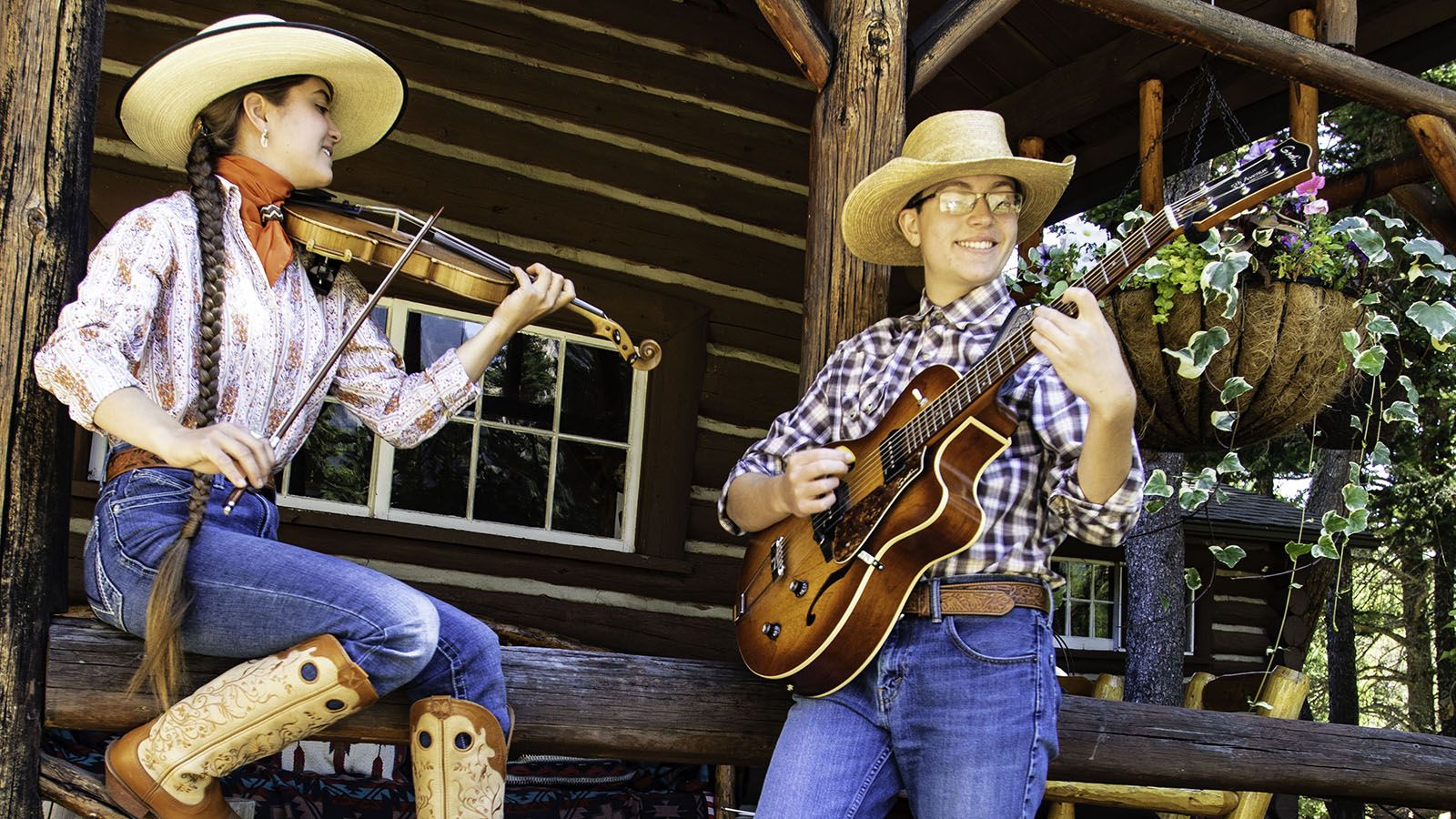 Sitting on the front porch of a log ranch lodge in Montana, siblings Brigid and Johnny Reedy pick up their instruments and experiment with a new musical collaboration. Brigid tucks a fiddle under her chin and smoothly glides a horsehair bow across the strings, while Johnny “Guitar” Reedy picks his guitar. Their inherent talents complement each other well and their voices blend seamlessly with sibling harmony. They revive old songs and compose new songs, arranging them with youthful vibes without losing the songs’ soulfulness and meaning.

“Our songwriting is an interesting collaboration process,” says 15-year-old Johnny. “Brigid goes off and writes lyrics on her own. Then she comes to me and I put them to chords. Our collaborations end up being very much or own sound, because we’re not trying to emulate someone as much as internalize the songs and then send them back out again.”

Brigid adds, “We arrive at the same place in music from different angles. I’m have a very free flowing, stream of consciousness approach, while Johnny comes from an analytical, pattern recognition side of things. He connects things very quickly.”

For the siblings, who have performed together as a duo the past few years, music is about connection not only to each other and their family, but also to friends, audiences, the Western landscape, cowboy culture and traditions.

“We always crave authenticity and real people; it’s about connection,” says Brigid. “It’s never been about showing off or wanting people to look at us or money or being famous. It’s about visiting with incredible people and offering something that connects us to them in this tradition and art form. “

The Reedys live in a 600-square-foot bunkhouse nestled in the Tobacco Root Mountains and along the Jefferson River in Whitehall, Montana. They get their creative genes from their parents, Heather and John. Heather has a background in textile design, but also weaves, braids rawhide, hitches horsehair and cooks five-star meals. John, a classically trained tenor, performed for several years at cowboy gatherings and guest ranches.

“We always joke that my mom’s side of the family has fine art painters, and my dad’s family has Irish horse thieves,” says Brigid. “My parents always look at the world artistically and taught us to do that, too.”

Brigid, who is a 20-years-old student at the University of Montana Western in Dillon, started performing with her father when she was 2 at cowboy poetry gatherings, and is now a regular on stage solo or with her brother. She recorded her first self-titled EP when she was 13 with the accompaniment of her father. Johnny joined his sister on the second album, titled Handmade, released in 2016 and produced by John.

“We recorded it in a bunkhouse in Waterloo, Montana, for a few months,” says Brigid. “It was truly a family project.”

Inspired by a sense of place, the duo recorded their latest album, Next Go ‘Round, inside the historic Doncaster Round Barn in Twin Bridges, Montana. It features 18 songs, a mix of traditional and original compositions. Brigid and Johnny wrote and composed half of the songs, and John produced the album. Brigid also illustrated the CD jacket and worked with her mother, Heather, on the graphic design.

“I love every CD we’ve made, because they’re true to us at the time,” says Brigid. “That’s how Dad raised us. We do our absolute best for our age and everything we do is timeless because we’re completely ourselves.”

Read more about the Reedys in the April 2021 issue of Western Horseman. To purchase their CDs, visit Brigid Reedy online.

A Cowpuncher’s Night Before Christmas