Art, Life and Driftwood horses: The World of Channing Peake

It’s hard to believe that Western artists such as Charles M. Russell, Will James or Maynard Dixon (among others) could pull off today how they lived life in the early part of the last century. We wouldn’t leave them alone. People would Tweet about Charlie Russell. Fans would be on Will James’ Facebook page. And Maynard Dixon would be hounded to endorse some kind of product about the Southwest. Artists of the early 1900s lived in a simpler environment. They could ride off and escape, as Ed Borein and Maynard Dixon did, to explore what was left of the West, years after Charlie Russell had proclaimed it long gone. It was a time of evolution, the transition from a horseback world to a wheeled and powered universe.

There were those who tried to hold on to part of what was left of the West and keep it alive. After Charlie Russell died in 1926, his only protégé, Joe De Yong tried to do just that, helping Russell’s widow, Nancy Russell, and her young son, Jack, keep their lives moving forward even though Russell’s shadow had left them behind. De Yong worked with many aspiring artists to help keep the flame of the West going. It was a constant struggle, as he loved the old ways and their authenticity, things he felt were being forgotten. He was always on the lookout for those who shared his vision of an enduring, yet evolving, West.

One artist who caught De Yong’s attention, enough that he would write his friend Maynard Dixon to introduce this young artist, was Channing Peake (1910–1989).

Five years after Russell’s death, a young Channing Peake had come from a scholarship-supported time at the California School of Arts and Crafts in Oakland, California, to attend the Santa Barbara School of Fine Arts. He met De Yong during his time there and worked with local artist Ed Borein on a large mural. He found working on fresco murals captivating and later spent some time in Mexico working on a number of large pieces including a mural at the National Palace as an apprentice to artist Diego Rivera. He returned later to the United States to work on a Works Progress Administration mural in New York’s Penn Station assisting artist Rico Lebrun.

In 1938, he married Catherine Schott (“Katy”) and purchased Rancho Jabali, north of Santa Barbara in the Santa Ynez Valley. It was there he found his direction, and while he worked the ranch his art progressed within the universe of his own creation. His interest in horses and cattle grew with the enthusiasm of his wife, Katy, and they established a Quarter Horse operation, initially with five RO mares from the Greene Cattle Company of Patagonia, Arizona, and later added five more mares—this time of One Eyed, Waggoner breeding from Duwain Hughes in San Angelo, Texas.

The story of their search for a stallion will be the source of a future article but for the sake of this piece; they ultimately succeeded with the purchase of a stud named Driftwood in 1943 from an Arizona roper they met named Asbury Schell. The Driftwood legacy is one of legend and his get took many a cowboy to wins. Driftwood was very special to the Peakes, especially Katy Peake, and the stallion would go on to be inducted into the American Quarter Horse Hall of Fame in 2006.

Channing Peake’s cowboy life was a string that ran through his entire creative life, and continued even after he had a pivotal meeting with artist Pablo Picasso during a trip to Europe in 1954. Peake’s life changed forever after he spent time with Picasso, who was quite taken by the young American in the cowboy hat. Peake’s art took a cubist turn. Picasso had, in effect, given him permission to “see”—to see in his own way, the world around him and in the 1950s. This was a huge leap for the artist. But leap he did. And he started by painting the things that surrounded him in his daily ranch life—farm machinery, cattle and horses.

Throughout the rest of his life, Peake would work at his art and his life, combining art and the world of the cowboy into a seamless, linear path. In 1979, he married Cherie Raber and they would spend the last decade of his life together. In 1999, 10 years after his death, a memorial show called Implementations: Farm Machinery & Other Images of Ranch Life, which celebrated the art of Channing Peake along with two of his artist friends who often stayed at Ranch Jabali, Rico Lebrun and Howard Warshaw.

Peake loved life and said of his trail taken, “I did everything I ever wanted to do, sometimes twice.” His was a life well lived. 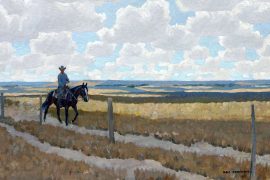