This painting, Vaquero Sport 1830, is by J.N. Swanson, who wrote, “The ‘sport of the day’ was the pitting of a fierce wild bull against a grizzly that were numerous in the central area of California. Several vaqueros would get their reatas on a bear and chouse it out of the mountains to a bull and bear pit in Monterey (in this case) where a bull was tethered awaiting the festivities. In this painting, the ‘steelhead’ ran up the Carmel River from the river’s mouth, that emptied into Carmel Bay. There’s a large sand spit where the bears fed, and made ideal conditions for the vaqueros to capture their choice of the largest, most fierce bear.” Image courtesy of Sally Swanson.

During the early part of the 19th century in pre-statehood California, all the planets seemed to align and the vaquero culture thrived for three specific reasons: great weather, plenty of cattle and plenty of grass. From the 1830s through the mid-point of the century, the rancho system in California was in full bloom. This was helped as Mexico was encouraging the settlement of lands to the north through the Colonization Act of 1824. The huge ranchos in California basked in the days of the dons and vaqueros worked amongst the “grand isolation” of the massive land grants.

This condition provided these horsemen with the endless time needed to work and refine the training of their mounts. Naturally, the process fostered a competitive environment during daily work done horseback. Given that, all sorts of random horseback competitions and games were created based upon practical skills.

For example, if one lost his dallies while trailing a roped cow, a highly skilled rider would be able to race up to the fleeing reata and bend down while astride and scoop the reata tail off the ground. Here was a serviceable display of balance and horse control. A competitive variation would have a rider gallop toward an object on the ground, such as a hat or a coin, and lean down to grab the item as he ran past. Difficult enough, yet remember that the vaquero had lots of time, so many games came from dares and could be considered quite dangerous and in questionable taste by today’s standards.

A good example is Carrera del Gallo. It translates loosely to “rooster career,” or “rooster work”—which you will understand after the game is explained is a poor “career move” for any rooster. It is commonly called “the chicken pull.” This competition was usually held at fiestas or fandangos in front of a crowd of onlookers. The concept was to grease a live rooster and bury it up to its neck in soft soil. At a signal, a horseman would ride toward the rooster at full gallop about 60 yards away. If he could gracefully swoop down and grab the bird by the head as he rode by, he was greeted with an exuberant response from the gathered partygoers. Those who missed received a full dose of shame. 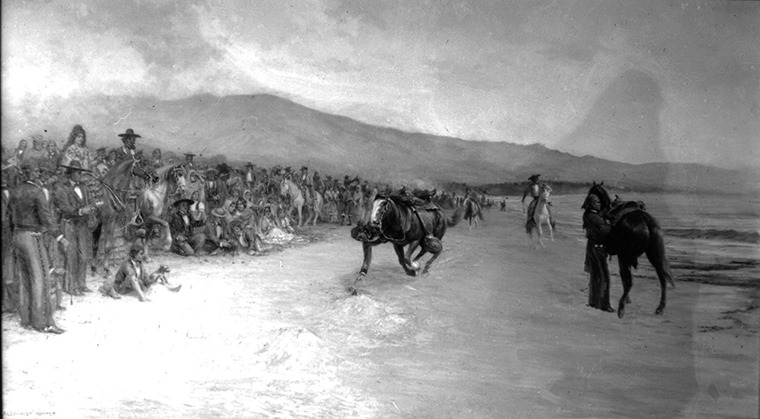 This photograph on glass plate is of a painting by Alexander F. Harmer (1856 – 1925). The Chicken Pull is currently owned and displayed by the Autry Museum in Los Angeles.

The vaquero competitions carried with them no shortage of ego, as pride in the ability of one’s horses was testimony to one’s personal capability. This of course, like anything, could be taken to extremes—such roping grizzly bears.

There are stories written and told of vaqueros who roped a grizzly bear “for sport,” and it evolved into an arena event that paired a captured bear against a bull. The activity started for true economic reasons. The late artist of the vaquero, Jack Swanson (1927 – 2014) depicted this “vaquero sport” in numerous paintings.

“Even in the late 1800s in California, there were enough grizzly bears to make a serious dent in a rancher’s herd,” Swanson wrote in 2005. “They had to be hunted down and eliminated. Often a team of three or four brothers, who had worked together on brandings and knew each other’s skill with reata and horse, searched out the bear. Sometimes using a freshly killed calf to entice the grizzly. Their reatas rarely missed. They would stretch out the bear with their well-trained horses and the grizzly was soon dispatched—or left unconscious for transport. It took much courage by rider and horse to get close to any bear, as they are extremely quick and sometimes would get hold of the reatas and pull down the horse. Heavily greasing the first twenty feet of the reatas helped. The bear couldn’t get a hold on the slippery rope.” 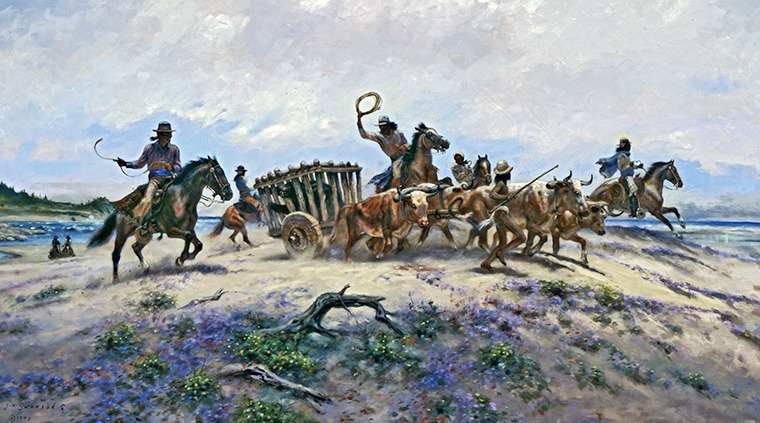 Swanson writes of his painting, To the Bear and Bull Pits, “If possible the bear was transported to the bear and bull pit in an ox cart, after being choked down and pulled into the cart. This is just one way, as these vaqueros with their great roping skills, could work a bear out of the mountains with several reatas on him and have him lead broke by the time he arrived in Monterey, where he was chained to a post and awaited his fate. The town San Juan Bautista, near Salinas, has a large parade ground surrounded by the mission and out-buildings. It was a favorite place for this battle.” Image courtesy of Sally Swanson

Another skill that gained in competitive stature was coleandro, or “fish tailing.” An original description of this feat is described in a wonderful, first person account by William Heath Davis (1822 – 1909). His book Seventy-Five Years In California gives a unique look at California’s Pastoral Period, with the disintegration of missions, the rise of the rancheros, the American invasion, the Gold Rush and the adoption of the territory as a state. Along with that history, he describes the popularity of the coleandro—which even today remains a part of most Charrerias (an equestrian event similar to rodeo, it is the national sport of Mexico).

According to Davis, “Sometimes when cattle were being herded in a rodeo, an obstinate or unruly cow, steer or bull, generally the latter, suddenly darted from the herd and ran away at full speed. The vaquero, being always on the alert to take his fun where he could, dashed out after the animal. When he caught up along side, he leaned over the horse and, by a dexterous movement, seized the creature by the tail. He would then put the tail around his leg or around the saddle horn, and urging the steed ahead and a little to one side, would release the tail at the right moment and the animal was rolled over and over on the ground. When it regained its legs, it was completely subdued, tamely submitted to be driven back to the herd and was not inclined to repeat the experiment.”

Fun during that time was wherever you found it—or made it up. Like in a herd of elk. In the 1840s, elk were plentiful in Alta California (the area’s name pre-statehood) and were killed for hides and tallow. Roping elk is even harder than it sounds, but skilled vaqueros could get it done even when a specific elk was designated as the target with the herd racing through the trees.

Success in these various games—and there are numerous others equally crazy and in dubious taste when viewed with today’s sensibilities—would at the time bestow serious “star power” on successful vaqueros. All these activities reflected the life they loved and was a part of the “rancho-way” until the mid part of the century. California’s statehood in 1850, the discovery of gold and the drought of the early 1860s marked the end of the quiet, isolation of the exquisite life of the ranchos.