Classic Reads from the Bunkhouse Bookshelf, Part One

Crack open these timeless titles and read stories that embody and celebrate the West.

Since way back in 1936, Western Horseman has provided thoughtful readers in the horse-and-cow culture substantive editorial on the life they love. The West has also been well represented in the literary world and with each new generation it is important to re-introduce classic reads that have enriched, educated and entertained so many who have come before. The traditions of the West can only continue when we invite new faces into the game and books like these can help support and underscore the West’s values and traditions for generations to come.

Over the years I have been asked what are some of the essential reads that can truly enlighten a reader about the American West – the land, it’s people and it’s ways. What follows is a random list of ten, classic and important books – all published prior to 1975 that over the years have celebrated as well as illustrated our uniquely American way of life. All of the books listed are still in print. The publisher and publication dates reflect first editions, with most still available at your public library – and of course, online. Next month: 10 must-reads published after 1975.

Trails Plowed Under: Stories of the Old West

Charlie Russell was able to secure his place in one’s imagination through both his art and his writing. This book of stories is a classic and over the almost 90 years since it first was published, it is still energetically read by lovers of the Western genre. The venerable NY Times said, “Russell writes easily, and in the vernacular. He tells of Indians and Indian fighters, buffalo hunts, bad men, wolves, wild horses, tough hotels, drinking customs, and hard-riding cowboys. . . . [He] lived long enough in the West to acquire a vast amount of information and lore, and he has left enough from his brush to prove his place as a sound interpreter of a stirring period and a fascinating country.”

Writer J. Frank Dobie said, “Russell was the greatest painter who ever painted a range man, a range cow, a range horse, or a Plains Indian. He savvied the cow, the grass, the blizzard, the drought, the wolf, and the young puncher in love with his own shadow, the old waddie remembering rides and thirsts of far away and long ago. He was a wonderful storyteller. . . . His subjects were warm with life, whether awake or asleep, at a particular instant, under particular conditions. This is a collection of yarns and anecdotes saturated with humor and humanity.”

This book is available in all sorts of electronic editions as well but the paper and ink version simply feels the way Russell would have wanted it. And that matters.

We Pointed Them North: Recollections of a Cowpuncher

E.C. “Teddy Blue” Abbott was by all accounts a regular cowboy who had worked on the range in the 1870s and 1880s. Abbott was “discovered” by a journalist named Helena Huntington Smith, who had read an interview with Abbott in a Montana newspaper. She began to meet with him and soon became convinced that his stories needed to be documented. Working with the aging cowboy in 1937 and 1938, Smith wrote as quickly as Abbott talked, preserving the tone and excitement of his stories of his first-person memories of his life on the big outfits. This is the real West. Abbott was a close friend of Charlie Russell as their memories were similar in context—if not truth.

Always the disruptor – before the word was hipster vogue – Edward Abbey lived for three seasons in the desert at Moab, Utah, and what he discovered about the land before him, the world around him, and the heart that beat within, is a fascinating, sometimes raucous, always personal account of a place that has already disappeared, but is worth remembering and not letting happen anywhere else. 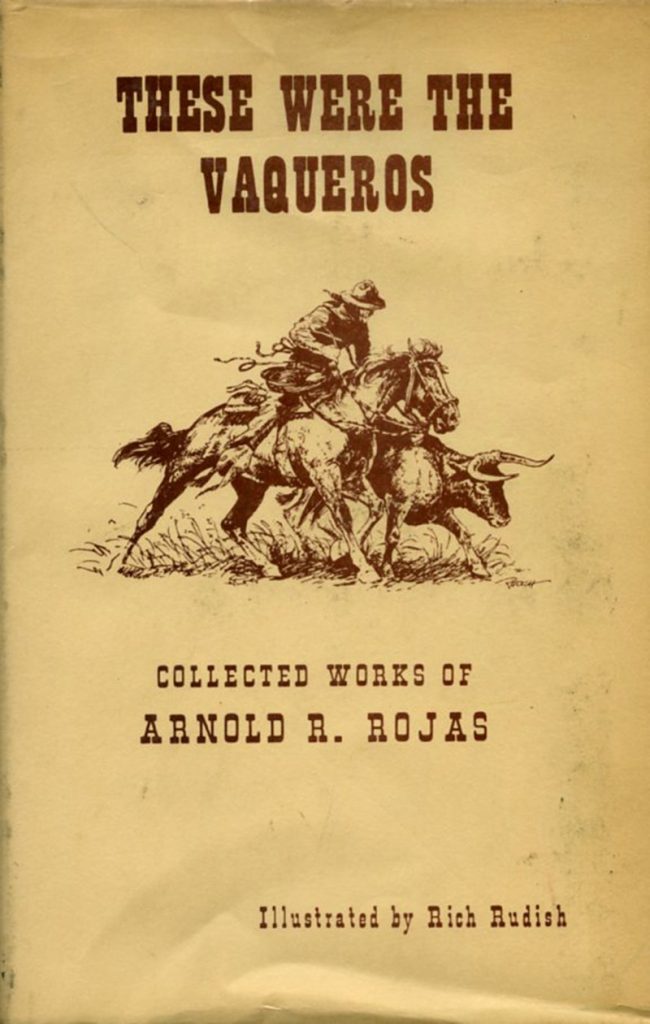 These Were The Vaqueros

The collected stories of Latino writer Arnold R. Rojas in five sections—based on five of his earlier works—with tales gathered from old California vaqueros. The first section tells the history of the early land grants and of the vaqueros who drove the great herds. The second section gives the lore of the vaquero in his ways and beliefs. Part three is filled with more stories from the vaqueros of old and how they worked their horses and mules. Part four tells more of the methods of the vaquero and section five speaks of bits and the ways of the bridle horse.

This House of Sky: Landscapes of a Western Mind

Ivan Doig grew up in the rugged wilderness of western Montana among the sheepherders and denizens of small-town saloons and valley ranches. What he deciphers from his past with piercing clarity is not only a raw sense of land and how it shapes us but also of the ties to our mothers and fathers, to those who love us, and our inextricable connection to those who shaped our values in our search for intimacy, independence, love and family.

Two Years Before The Mast

Just two weeks after his 19th birthday, Richard Henry Dana Jr. left Harvard University, made his way to Boston Harbor, and talked his way onto a ship. It was 1834, and the voyage would take Dana around Cape Horn, at the southern-most tip of South America, to California, a sparsely populated outpost of newly independent Mexico. Dana thought the salt air and exercise would do him good—a bout with measles had weakened his eyesight—and it did, even though he spent much of his time “before the mast,” in the common-crew quarters at the front of the ship. To this day, his descriptions of what would become California stand as authoritative observations. He would add a chapter on changes to region in a later edition published in 1869 after his return to California, a year before statehood in 1859. This book was a school reading list standard through the middle of the last century. The book has been published in over 700 editions since 1840.

Confined to a wheelchair, retired historian Lyman Ward sets out to write his grandparents’ remarkable story, chronicling their days spent carving civilization into the surface of America’s western frontier. What emerges is an enthralling portrait of four generations in the life of an American family. Stegner’s Pulitzer Prize-winning novel is a study of personal, historical and geographic discovery.

Will James’ first novel is about a little cow horse, and as the story goes, the horse named Smoky knows only one-way of life: freedom. Living on the open range, he is free to go where he wants and do what he wants. And being a smart colt, he learns what he must do in order to survive. But then he comes across a new enemy, one that walks on two legs and makes funny sounds. Smoky can’t beat this enemy like he has all the others. But does he really want to beat it? Or could give up some of his freedom mean getting something else in return that’s even more valuable? James’ first book started him on a roll that made him a western celebrity in and outside the West. This is great read for everyone.

A novel about California ranch life, Robert Easton wrote the novel while undergoing Army training at Camp Roberts in Central California in the early ’40s. Happiest when working as a hand, Easton writes of being a hand with A.B. Miller’s B.B. Cattle Company in the Sacramento Delta—the West’s biggest feedlot operation, followed by a stint at the historic McCreery Ranch in the Coast range near Hollister. He presents with clarity his world of men and women working alongside their animals in the big ranch country of California during the early part of the last century. His title describes him perfectly.

The Cowboy and His Interpreters

This descriptive book of the cowboy arts and the real West takes on a narrative tone as author Douglas Branch includes interesting excerpts from other books which illustrate cowboy songs and conversations. The book includes a huge bibliography at the end and is gloriously illustrated by Will James, Charles M. Russell, and Joe De Yong. Here is the life of the cowboy written about when many of the “old cow dogs” were still around. It’s a timeless presentation.