Chuck “Ironhand” Willcox was a teamster, a stunt man and a one-handed silversmith. Above all, he was an original.

The West has always attracted unique characters, and Chuck Willcox could fit in with the best of them. Chuck’s story is as wild as mountain scenery, and when he passed away last month at the age of 85, it gave many who knew him pause to remember what a truly Western life he lived.

Born in Lancaster, Pennsylvania, in 1933 to hard working Amish parents, Chuck learned early in life the value of a great team of horses broke to harness. His youth was filled with days driving teams, plowing fields and caring for livestock. At the age of 15 he ran away to join the circus in Florida. There he continued to drive teams of horses, and he also learned to care for the big cats in the circus animal shows—a skill that he no doubt utilized later in life when he took in an orphaned cougar. Named “Tom,” the big cat lived with Chuck for nearly 20 years, was a daily companion at Chuck’s trading post in West Hollywood, and greeted visitors from the upper rafters with a little snarl.

With wanderlust pushing him, Chuck’s life became the stuff of a Hollywood script. He went on to become a professional wrestler, a sport that took him all over the country and introduced him to the world of Hollywood stunts. He started working in the Western film business by drawing on his experience in driving large teams of horses. He worked at Republic Studios, the center of the universe at the time for Westerns, and starred in a number of B-list films.

He performed his own stunts, which studios appreciated because it saved on production costs. In turn, he could make as much money falling off a horse in an afternoon shooting as he could working for a week as a bit player in a film. Chuck went on to be a stunt double for many Hollywood greats, such as Tony Curtis, James Dean, Guy Madison, William Holden, Robert Wagner, Richard Burton and Humphrey Bogart.

Many stunts at the time were quite dangerous and involved everything from black powder rifles to swordplay. Unfortunately, sometimes stunts went wrong, and one time during a filmed sword fight a saber went through Chuck’s cheek, nearly severed his jaw and caused the loss of his left eye. Despite the accident, he continued to work as a stuntman.

Chuck suffered yet another life-altering injuring while hunting for big game in Africa. An accident with a black powder rifle resulted in the loss of his left hand, putting an end to his career as a stuntman.

Considering those injuries and others he suffered over the years, there was a period of time when Chuck fought doubts about his future. But he was helped through this difficult time by his friends in Hollywood, including legendary singer Ethel Waters. She encouraged Chuck to look beyond his physical challenges and get on with his life. She reminded him he may have lost a hand and an eye, but he hadn’t lost his brain and to use the gifts he had.

“Silversmithing and engraving became a natural thing for me to learn at that point,” he told me several years ago. It was at the trading post he owned and operated during the early 1960s that led to his interest in the craft. “The trading post became quite a gathering place and folks would come and bring all sorts of interesting Indian pieces needing repair. They would want me to send them off to the Zunis or Navajos or whatever tribe the pieces came from, and that concerned me as time schedules on the reservations did not always match my customers. Given that problem, I found myself repairing and matching pieces myself there in my shop. It was tough at first, but I found I seemed to really enjoy it.”

“I was fortunate I had some good people to learn from back then,” he adds. “I learned a lot from both Philip Fredholm and Charlie Sample. These two had both worked for Ed Bohlin early on. Fredholm was amazing, as he could do anything—chasing, engraving, and die-making. He was something. But even between the two of those artists, I had to learn more. So I went to the Gemological Institute [of America] in Santa Monica to learn letter engraving and stone setting. It really helped. If you can do lettering, well, you can engrave just about anything.”

Chuck says he kind of shocked the instructors when he showed up at the Gemological Institute with only one hand. Chuck was undeterred, and the words of Ms. Waters rang true as his determination and sense of humor helped him get through the learning process. Later, he designed his shop and instruments so he could create pieces seamlessly with his prosthetic hand.

“I adjusted my shop to my needs,” he said. “My engraving ball is fitted with little circular ‘eye’ bolts on the sides so I can turn the thing with my hook. Also, I have made some attachments over the years that help me in the process.”

Chuck was a gracious and talented man who always kept going.

“One has to grow in life,” he told me, “and live the hand you’ve been dealt.” 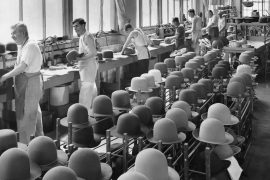