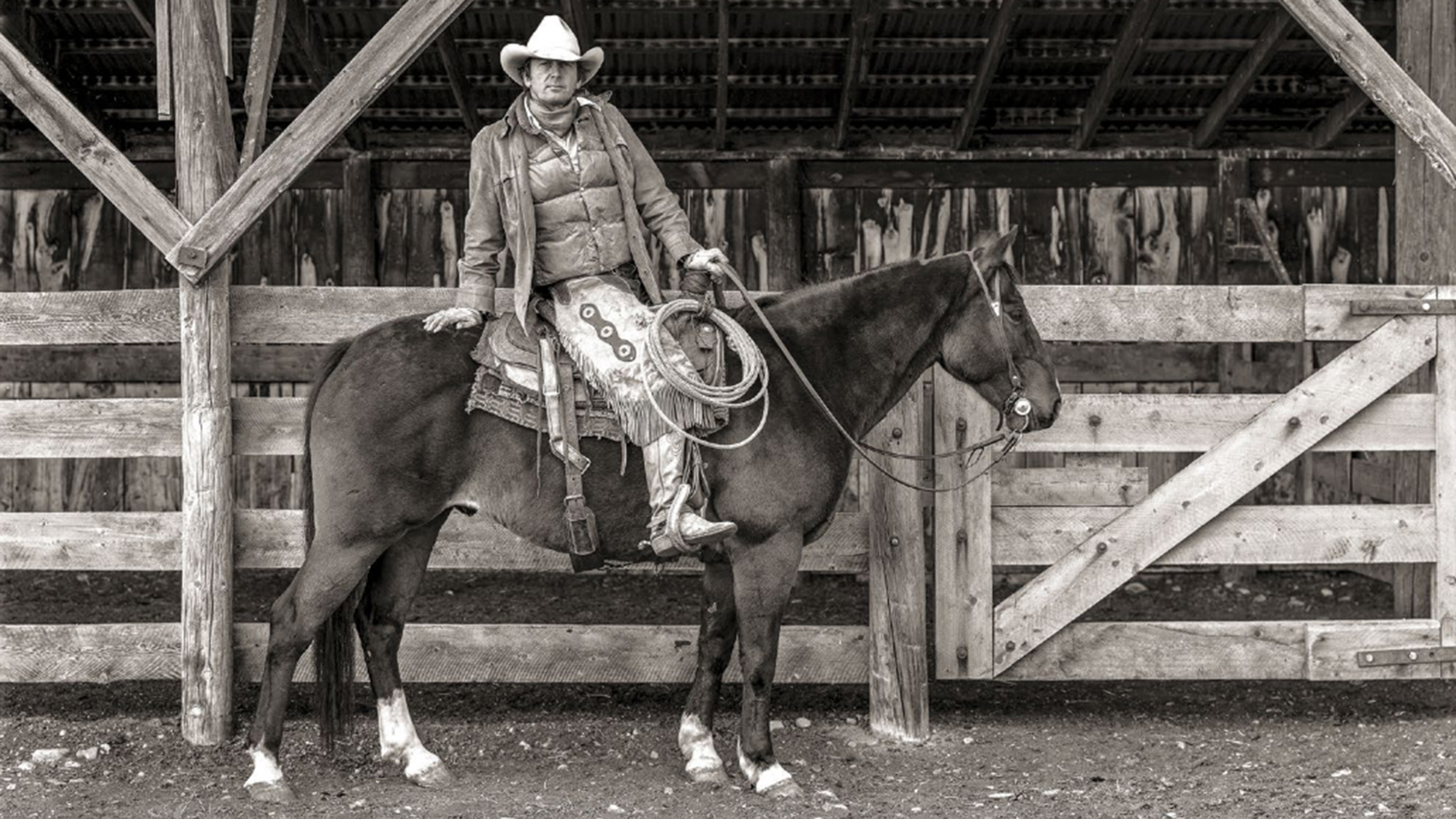 For more than 50 years, this legendary Arizona photographer has created thoughtful images of the region and its iconic cowboys.

“I agree with Rod Stewart; every picture tells a story, ” says Jay Dusard, referencing Stewart’s 1971 album. And for the last 50-plus years, the Arizona photographer has done just that — use his large-format film cameras to tell stories of cowboys, families, artists and landscapes. It’s been quite a journey for someone who moved from St. Louis, Missouri, as a boy, who bought his first horse in the early 1960s while stationed at Fort Hood in Killeen, Texas, during his time serving in the U.S. Army, and who later began working on neighboring outfits.

After the service and a couple of jobs later, Dusard landed in Arizona and essentially taught himself photography using an 8-by-10-inch view camera. He began teaching at Prescott College in Prescott, Arizona, in 1968 and was fortunate to create and maintain a fruitful working relationship with Prescott photographer and teacher Frederick Sommer (1905–1999). He considers Sommer to be his main mentor — even though he loved and was influenced by the work of pioneer photographer L.A. Huffman (1854–1931).

“Once I saw Huffman’s book, Before Barbed Wire, I pretty much never looked back,” Dusard says.

Legendary photographer Ansel Adams (1902–1984) was another influence on Dusard. In 1966, one of Dusard’s friends talked him into attending a two-week photography workshop with the master photographer.

“My friend Dan said it was being held in Yosemite National Park and we simply had to go,” Dusard recalls. “So we loaded our gear into his [Volkswagen] Bug and headed for the park’s pretty basic campground. It was time for me to start applying what I had learned from my study of Adams’ celebrated Basic Photo Series [of books].

“Toward the end of the workshop, when our group of 64 participants was at Tuolumne Meadows, one of Ansel’s close friends, photographer Milton Halberstadt, was up there assisting and I took him aside. I was complaining to Milton about the lack of clouds. He said, ‘Keep your eye on Ansel. If he reaches for a tripod, clouds will form.’ Within minutes the maestro started setting up his tripod, and sure enough, a few small clouds appeared. By the time he was looking through his Hasselblad, a full-blown cumulonimbus extravaganza was underway.

“But my favorite story of that trip was near Happy Isles down below in Yosemite Valley. Our group was seated at the feet of the master for the Sermon on the Zone System. A small brown bird landed on the ground between Ansel and those in the front row. A woman participant raised her hand. ‘Excuse me, Mr. Adams. I hate to interrupt, but can you tell me what kind of bird that is?’ Ansel looked at the bird with great seriousness [and replied], ‘That, madam, I believe is an extramarital lark.’ ”

That was the beginning of a long relationship between Dusard and Adams.

“Ansel was very generous with his time to aspiring photographers,” Dusard says, “We could bring our portfolios to his home for his review and counsel. Ansel and his wife, Virginia, were most gracious with their hospitality and libations. My 1976 session with Ansel was pivotal to the advancement of my work in photography. In 1983 I was on the faculty of a Friends of Photography landscape workshop with Ansel and a few of my peers.”

Dusard’s first book, The North American Cowboy: A Portrait, published in 1983, marked another milestone. This was the result of a 1981 Guggenheim Fellowship in Photography enabling him to travel the cowboy trail with his 8-by-10 outfit, saddle and bedroll to document the contemporary working cowboy. The book is a landmark, culture-changing collection of images, as is the work of fellow photographer, Kurt Markus. Of Dusard’s work, Markus wrote in the book’s introduction, “Jay’s photographs reflect the elemental cowboy, keeping you leveled no matter what your baggage. His pictures are as solitary and exposed as windmills on prairie flats; the design takes you to the right country but drops you off so you can find what you need away from paved roads. I believe in these photographs — Jay knew whom to freeze as surely as Charlie Russell knew whom to paint.”

Of his photographic style, Dusard explains, “I have never been terribly adept at capturing action with a camera, nor terribly inclined to do so. My rather formal approach to photographing people in relation to settings consistent with their life and livelihood can legitimately be considered environmental portraiture — a label that exemplifies the work of the late Arnold Newman. A foolish consistency or not, practically every one of my portraits includes the entire person or persons. Nary a mug shot in the entire wagonload.”

As for lighting his subjects: “Without exception, I have never used artificial lighting, not even reflectors. I invariably seek soft, revealing light — the shady side of just about everything — when my prayers for cloud cover are denied.”

After all that travel, work and tested patience, the rewards do come, as Markus knows so well, “The rewards do arrive — in a darkroom tray, slowly in the artificial darkness at random intervals frequent enough to inflame the momentum, lurch it ahead. Bent over his trays, Jay Dusard watches faces appear, familiar beyond names and headquarters locations. They are the faces of friends.”