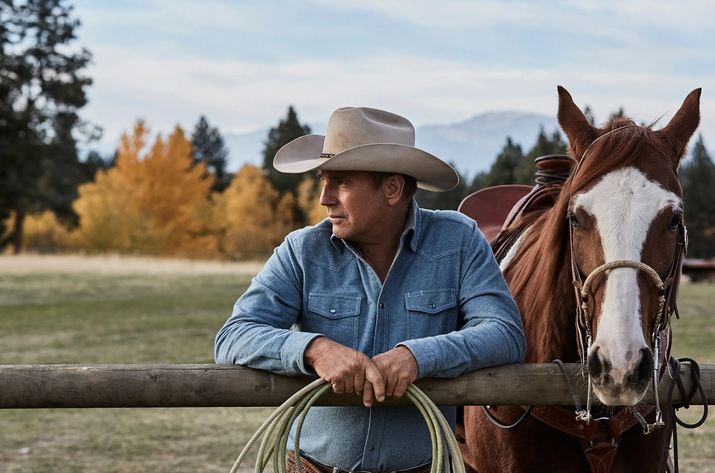 From John Ford’s She Wore a Yellow Ribbon to Kevin Costner’s Yellowstone, Western film continues to evolve. But they remain because we need them.

Recently, I watched the John Wayne/John Ford classic Western film She Wore a Yellow Ribbon. The movie won an Oscar for cinematography, an achievement that can be partially credited to the fact that John Ford and his cinematographer, Winton Hoch, based much of the film’s lighting and imagery on the paintings of artist Frederick Remington. Using fine art as visual inspiration is a pretty elegant approach to making a cowboy movie. Of course the location didn’t hurt either as Monument Valley is way better than a Hollywood back lot.

The use of art was seen again that same year, as another Western film was in the works: the George Stevens directed adaptation of A.B. Guthrie’s Shane, released in 1953. That film took its inspiration from the paintings of Charles M. Russell, helped along by scenic artist Joe De Yong.

There is a touching scene in the Ford film as Wayne’s aging war-horse character, Captain Nathan Brittles, is being retired and has one last review of his troops. His men present him with a silver pocket watch engraved with the sentiment, “Lest We Forget.” It is a telling moment, both in the film and the environment for Westerns. An era was changing; the film was released in 1949, as the country was moving headlong into the 1950s. Big post-war social and tech changes were in the works.

Toward the end of the film, at the last minute, Wayne’s Nathan Brittles was pulled back from literally riding into the sunset to be reassigned as a scout for the same Army that retired him. California had been his goal, and the far West was the future, like for so many after World War II. So was television, the growing cultural game changer that was moving stealthily into our nation’s daily life. In 1946, there were 10,000 television sets operating in the United States. By 1950, that number had risen to 5 million.

This growth would bring, among other things, the “new West” into people’s homes with popular Western television shows that would feature many fading silver-screen cowboys with renewed opportunities to reach new audiences. Roy Rogers, Gene Autry, The Lone Ranger and Hopalong Cassidy, among others, would have regular television shows where, episode after episode, cowboy heroes would save the day. It would last until the 1960s when cowboys and horses were replaced with spaceships and talking cars. An elegant era of simple, value-based storytelling may not have been ending, but it was evolving.

This was brought home to me in 2010 while watching an auction of items from the closed Roy Rogers & Dale Evans Museum in Branson, Missouri. After Roy retired from films and television in the mid 1960s, he and Dale created a little museum in the high desert town of Apple Valley and later moved it to Victorville, California, and then Branson. It was their celebration of all things Roy and Dale and featured memorabilia from their careers, including movie posters, stills, costumes, souvenir lunch boxes—even Nellie Belle the Jeep and Roy’s trusty horse, Trigger, lovingly preserved in his signature rearing position.

I can remember meeting Roy Rogers for an interview at the Victorville museum location in the early 1990s. As we chatted, he took me on a tour of the museum, dressed exactly as you would picture him, and greeting every guest he saw. He would welcome them and stand for a photo, but whenever the conversations got too gushy, he would skillfully extricate himself by saying, “Hold on, did you hear that? It’s Trigger, he’s calling me. Better see if he’s in trouble!” He would smile and we walked away. He really was Roy Rogers, not a guy playing a character. He was precisely how he appeared and stayed true to the values he espoused until his death in July of 1998, ironically followed by Gene Autry in October of that same year.

The aforementioned auction was billed as the Roy Rogers and Dale Evans Museum Collection of more than 300 lots and was presented by Christie’s. It was a bit disheartening as a child of the 1950s—who had grown up with Rogers—to see all those memories one last time before they were disbursed to the four winds. The prices were incredible. One of Roy’s director’s chairs, with an estimate of between $300-$500, went for $11,250.00. Lest we forget.

Comeback of the Western

There was a feeling at the time that the Western was simply gone as we started the last decade of the 1900s—even with the television success of the 1989 mini-series, Lonesome Dove. The genre occasionally would reappear on the big screen, as in 1985 by the unlikely persona of Kevin Costner. First in the somewhat tongue-in-cheek Silverado, followed in 1990 with the adaptation of Michael Blake’s book, Dances with Wolves. No one thought in 1991 that a Western could win an Oscar, but it went on to win seven Academy Awards including Best Picture. The year 1992 brought us Clint Eastwood’s Unforgiven, which won Best Picture, Best Editing and Best Director.

Hollywood critics have a favorite headline, “The Western is dead.” But it wasn’t, and it isn’t. It simply has evolved with the times to something beyond its simplistic origins, proving it’s still needed—like the grand audience reception for Costner’s 2003 sentimental cable homage to Robert Duvall, Open Range. The audience was there, waiting, craving some great writing and new perspectives—but not too new. Then in 2018, Costner rode in again, a little older but still big, wide and handsome. This time he came to cable television with what can only be described as a darker version of 1960s The Big Valley and 1970s Dallas with his episodic expose of a Montana ranching family’s struggles in Yellowstone. It’s still running.

Each generation has its film heroes and its celebrity moments, usually reflecting the values of the era’s cultural ebb and flow. An argument can be made that Yellowstone reflects some of the current shenanigans and divisions in our society today. Maybe, but it works and is well received. Still, for those Western moments long gone, film and the Internet help us to watch and remember them, and what they meant to us. In She Wore A Yellow Ribbon, Captain Brittles was saved from riding into the sunset, because he was needed, just like the Western film itself. Roy and Dale’s era may be over, their friendly and fun museum gone, but their values and approach to family and life live on in collective memories. Their elegant and courteous approach to life is still out there to be seen, even though they have headed on up the trail ahead of us.