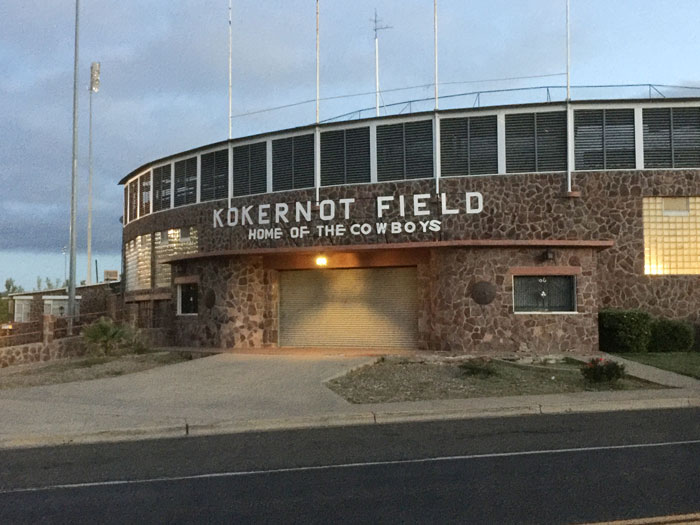 Herbert Kokernot, Jr., was determined to build a baseball empire worthy of his ranch’s o6 brand.

West Texas is full of unexpected sights, from artistic renditions of Prada and Target storefronts in the middle of the desert to random flashes of light in the night sky over the town of Marfa, an atmospheric phenomenon known as the Marfa Lights. In Alpine, Texas, one of the most surprising structures is a magnificent baseball stadium built in 1947 by Herbert Kokernot Jr., who owned and operated the Alpine Cowboys semi-professional baseball team and the iconic Kokernot-o6 Ranch.

Kokernot Field in Alpine, Texas, has a rich history related to ranching. Photo by Ron Bonge.

During the 1940s, baseball was one of America’s favorite pastimes. Nearly every small town had a local baseball field and team, but the Alpine Cowboys (formerly known as the Alpine Cats) semi-professional team and their field became known well beyond their region. An avid baseball fan, Kokernot breathed life into an average baseball club and gave many young men a chance for better lives. The ramshackle field in the heart of Alpine where the team played boasted the o6 brand on the outfield fences. When Kokernot Jr.’s father visited the ranch he advised his son that if he put the family’s brand on something, he needed to make sure it was worthy of the brand’s legacy.

Taking his father’s words to heart, Kokernot Jr. studied the best major-league ballparks in America and decided to construct a stadium for his team modeled after Wrigley Field. Measuring 330 feet along the left and right sides and 415 feet across the center, Kokernot Field cost $1.25 million to build and seated 1,400 people. The infield was made of Georgia red clay shipped by boxcar. Native stone quarried from the ranch was used to construct the walls and grandstand. Lighting was installed in 1958.

Kokernot aggressively recruited the best players he could find and offered them generous salaries, paid for their education and lodging, and even sent money to their families at home to keep their farms and ranches going. Several members of his team went on to play major-league baseball, including first baseman Norm Cash who spent the majority of his professional career playing for the Detroit Tigers, and 1991 Baseball Hall of Fame inductee Gaylord Perry, who pitched for eight major-league teams during his 22-year career.

Through the years, Kokernot Field has also been home to the Sul Ross State University Lobos, the local high school team, the Alpine Bucks, and minor-league teams that followed in the Cowboys’ cleats.

Today, Kokernot Jr.’s great-granddaughter, Kristin Lacy Cavness, is the general manager and treasurer of the Alpine o6 Cowboys team, which is part of the Pecos League of professional baseball clubs. Her father, Chris Lacy, is the fifth-generation owner and manager of the Kokernot o6 Ranch with is wife, Dawn.

During the Fourth of July parade in Alpine, Texas, the Kokernot o6 Ranch crew visited the stadium while horseback. Photo courtesy of the Lacy family.

Read more about the Kokernot o6 Ranch in the August issue of Western Horseman. The history of the Alpine Cowboys baseball club is documented in the book The Amazing Tale of Mr. Herbert and His Fabulous Alpine Cowboys Baseball Club, by D.J. Stout, son of former Cowboys player Doyle Stout.