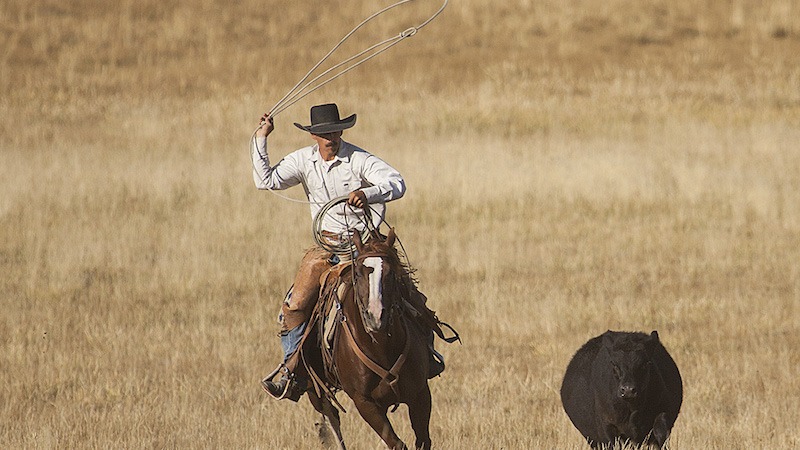 A collection of respected ranchers, horsemen, stockmen and industry experts lists 12 reasons why horses remain the best tools for gathering and working cattle.

It almost seems too obvious to mention. Using horses, many ranchers explain, is still the best method for gathering and working cattle. Modern cowboys can roll out a list of reasons that reach beyond personal enjoyment, keeping with past traditions, or justifying some saddle-bound buckaroo image.

The old-time trail drovers, such as Andy Adams and Charles Goodnight, described at length how they rounded up wild cattle and pointed them northward across turbulent rivers, dry prairies and hostile Indian territory. But in researching their writings, it isn’t easy to find arguments for why horses were the best way to handle cattle. In those days, horses were the only vehicles designed for the task. It was simply too obvious to require explanation.

But more than a century later, the cattle business has evolved drastically. Cattle are more docile and kept in small pastures. They’re shipped to slaughter—not trailed—and technological advances such as squeeze chutes, hot shots, tractors, range feeders and pickup trucks have made ranching a more efficient process. So what’s the practical purpose, really, for keeping a string of stout-hearted cow ponies?

Americans in the 21st century operate in a rush-rush society. However, drive-thru windows, overnight shipping, iPhones and instant messaging don’t compute to a cow and her newborn calf. Nevertheless, cattle today are often subjected to hustle-bustle, holler-happy cowhands with little patience.

All the chaos prompted rancher Bud Williams to begin touring the country 20 years ago, teaching improved methods for working cattle, now commonly termed low-stress livestock handling. Other clinicians have followed in Williams’ footsteps, including Curt Pate, Ron Gill and Todd McCartney. The trio of stockmen last year partnered with the National Cattlemen’s Beef Association and traveled to 20 states, demonstrating low-stress stockmanship and stewardship techniques. These men subscribe to the same principle held by past cattlemen: that the best tools for working cattle are horses, as long as the work is calm and quiet.

“Working cattle is a matter of timing more than anything else,” Williams says. “I spent 30 years riding a horse almost every day. I think a horse is great for handling livestock, but you have to do it properly. Too many people know how to ride but don’t know how to work animals. They use the horse to overpower the cattle. There shouldn’t be any commotion and turmoil.”

Many other stockmen are convinced that nothing compares to working cattle from the saddle. Here’s why:

A horse gives you an extra set of eyes when gathering.

“The horse can hear and see so much better than the human. So when you’re gathering and trying to find cattle, I think the horse finds most of the cattle. His ears point at something in the brush, and we look to see where he’s looking. He tells us where there are cattle. That’s a big advantage. If you’re on a four-wheeler or a
motorcycle, you can’t hear anything.”

Driving cattle with horses, though slow-paced, is efficient and easy on cow-calf pairs.

“When you’re trailing cattle, the back end can’t run over the front [of the herd]. So [going slow with horses] absolutely doesn’t take any longer. If you drive a bunch of cows and calves, handle them rough and tough and quick, the next thing you know, all the calves are away from the cows and running back, and the cowboys are running this way and every way to contain them.

“So it’s not true that because you hurry up you get there any quicker. Wild cowboys make wild cattle. I’m a firm believer in handling them easy.”

With horses, cattle can be trained.

“If you work them with horses, and work them right and never get in a hurry, the cattle get docile, and that’s what you want.

“I bought about 700 heifers back in the ’60s or early ’70s, and I didn’t know that they had been gathered with helicopters all their lives. We couldn’t get them on feed like normal cattle. Then we needed to move them and had to pen them before we could load them. But they wouldn’t bunch; they’d stay scattered. We got them up close to a corner gate and tried to move them through it. But those cattle flushed and came back on us. It killed seven or eight of them, just running over one another. It took three or four more tries before we could get them bunched.”

Roping cattle in the pasture is the least stressful method for doctoring.

“When you’re running yearlings in big fields, the only way to doctor is horseback. You need to rope and doctor the sick ones as easy as possible. Nowadays, guys don’t cowboy as well because the only thing they know is how to arena rope. They get to chasing cattle, and that’s not good for them.

“In this country, cattle get a disease called anaplasmosis. It’s so severe that if you run them hard or try to drive them very far, they can die. So you got to catch the cow really quick, before his heart rate gets agitated.

“And you can doctor them so much easier if you do it right where they’re at. To do that, you’ve got to have horses.”

When sorting in the herd, a calm horse does the job smoothly.

“The old timers would talk about how a good horse in the herd would never raise his head above the saddle horn. That meant he was watching the cattle.

“Good horses don’t excite cattle. I can get in the alley and segregate heifers from steers and never excite them. You get in there afoot and you got those suckers jumping over each other and running by you in the alley. They don’t do that when you’re horseback. And gentle, calm cattle feed better, gain better and become tender carcasses.”

“On foot, you’re a small object. On a horse, they can see you coming, keep focus and respond to you better.”

A horse’s athleticism and precise maneuverability is unmatched.

“Going on a horse, you have time to get your mind right and approach cattle in a controlled fashion. A horse just makes you much more mobile. If you’re using a four-wheeler, maybe you can stop and back up, but you stay in that position too long. When working cattle, you need to release pressure quicker. And you can do it better with a horse than you can with any other kind of equipment. You can get to a certain point quicker, add some pressure, then take it off.”

Some country is simply too vast and rugged for anything other than a horse.

“Between what we own and what we lease, we have to cover nearly 50,000 acres. We’re running cattle in big areas, and some of them are pretty rough. One area has about three miles of the Cimarron River going through it, and that’s totally covered by tamarak [trees]. So we need horses to get around those kinds of places. You couldn’t get in there any other way.”

A horse allows you to focus completely on the cattle.

“Your horse walks all day, so you stay fresher and don’t get as tired. You can see better because you’re at a higher vantage point. And you can watch the cattle better because you don’t have to look down at where you’re stepping.”

“If your country is flat, and you say, ‘We can get anywhere we want to with a four-wheeler, and we go slow and our cattle are gentle, and we enjoy our four-wheelers,’ and you give all these reasons, I often say, ‘What’s the resale value on your four-wheelers?’ They do nothing but decrease in value. But your horse increases in value, especially when you can market him to a family as a kid horse or to an arena cowboy. Look at it from a business standpoint. Every hour you’re on your horse, you can increase his value.”

“We’re a total artificial-insemination program, so we’re gathering heat cattle every day. You can observe and gather cattle so much easier on horses. They’re going to detect movement and sense things. A lot of times when you’re looking for the animals in estrus, they may sense a movement and look to where one cow is riding another before you do.

“And when you’re out in the pasture and a predator is coming along, they’re going to see it before you do. Or you’re loping across big country and all of a sudden your horse jumps or swerves, and there was a huge hole there that you never saw. Their intuitiveness is better than that of humans, and it keeps both of us from getting hurt.

“I was working on a 3-year-old just sorting cows and baby calves. She was pretty young and hadn’t done that before, but she figured out what we were doing and began using just her head to sort those calves. Rather than moving her body, she would use her head. I had never seen that before. That was pretty cool.”

A horse makes you better.

“A horse can teach you things that make you a better person. You don’t have to exercise patience with a four-wheeler, you don’t have to exercise courtesy or husbandry. All of those things are required for a horse, and all of those are good for the inside of a man. Just like Will Rogers said, that the outside of a horse is good for the inside of a man. From the beginning of time, we have benefited from our relationship with animals. They make us better people.

This article was originally published in the June 2009 issue of Western Horseman.