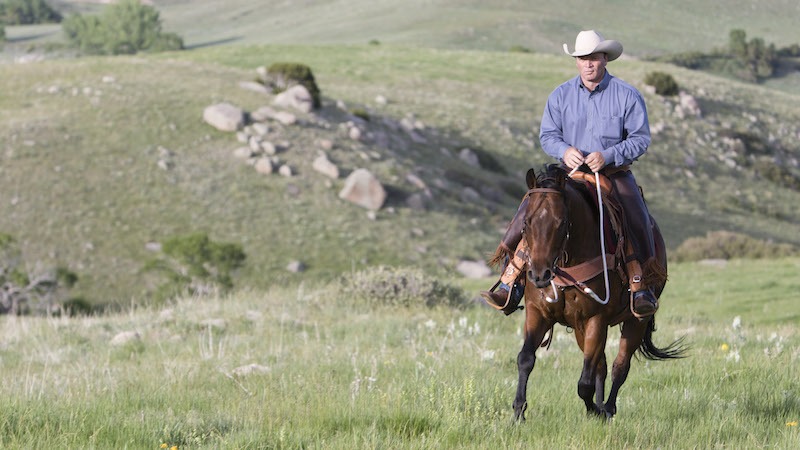 Don’t Push Me: Steps to Correct a Pushy Horse

You can see it on the ground or in the saddle: a horse that disrespects its rider. When being led it crowds into the person or charges ahead. Under saddle it gets nervous and jigs, or takes hold of the bit, stiffens its neck, refuses to bend and soften into the bridle, and takes off in the direction opposite where the rider wants to go. Pushy horses are not only frustrating to work with, but they also can be dangerous because they know no boundaries and could run over a person or take off .

“What creates a bullish or bracey horse is a lack of leadership,” says horseman Ken McNabb. “It’s important that you establish leadership with your horse to maintain your safety on the ground or in the saddle.”

McNabb says it all begins with understanding how horses establish their pecking order. Growing up on a private wild horse preserve on the edge of the Pryor Mountains in northern Wyoming, McNabb spent his formative years studying herd dynamics.  Then he spent several years apprenticing and traveling around the United States with his mentor, clinician John Lyons, before starting his own training and clinic program.

“A common misconception is that the pecking order in a herd is all about who gets the best feed,” he explains. “However, it’s really about who is strong enough to protect the herd from danger and is in charge of the herd’s safety. If the horse at the top of the pecking order thinks something is scary, all of the other horses will follow suit. If something scares the weakest horse, the herd will probably ignore it.”

To stand up to a disrespectful horse, you have to mimic herd dynamics and become the respected leader to your horse—the one at the top of the pecking order that makes it feel safe.

“If your horse gets pushy and acts like a bully, you instantly know he doesn’t believe you’re capable of protecting him so he’s going to push you around and fight back,” McNabb says. “If there’s a challenge in the herd, it’s met with enough pressure to move the horses’ feet. That’s the key to correcting a bracey, pushy horse. When the horse finally subjects itself to the movement, it sees you’re strong enough to move its feet and accepts your leadership.”

Get Grounded
McNabb’s training philosophy boils down to one simple question: What’s in it for the horse?

“My only answer is the release,” he explains. “Horses seek release in everything they do, so the key to everything I do with a horse is to search for the smallest try and reward it. I don’t frequently focus on correcting what a horse does wrong. Instead, I focus more on recognizing what the horse does right and rewarding it.”

When working with a horse that’s pushy on the ground, one that crowds you or pushes ahead and drags you, McNabb gets its feet moving by asking it to trot a circle around him on the lead rope. When the horse is moving freely, he steps in front of its eyes, applies pressure to the inside of the circle on the lead rope to bring the horse’s nose to the inside, and then sends the horse in the other direction.

“I’ll continue that until the horse starts to pay attention and stops its feet when I step in front of it,” he says. “Then I want the horse to get to the point where it lowers its head when it steps out and changes direction. It’s like ballroom dancing; I step out and the horse comes through. I’m teaching it to not only respect my body, but also the halter and lead rope.”

If the horse comes toward McNabb and crowds him when changing directions, the horseman spins the tail of his lead rope toward the horse’s shoulder, making contact if necessary, to drive it away.

Another groundwork exercise McNabb performs on a pushy horse is asking it to back up. He applies backward pressure on the lead rope with his left hand while swinging the tail of the rope toward the horse’s shoulder to encourage it to back.

“My body is the cue, and the rope is the enforcer,” he explains. “Every cue should have an enforcer, but the enforcer should never become the cue. The horse learns to respect both my body cues and the lead rope, and [with practice] I can get it to move off my body cues. I can step toward the horse without lead rope pressure and it’ll back in response to my body. Then I can walk forward, stop and back up, and it’ll start moving in response to my body cues.

Ride Miles That Matter
If you don’t address the problems of a pushy horse on the ground, it will transfer to the saddle in the form of jigging and bracing on the bit.

“Horses jig for one of two reasons: they’re hot, sweaty, tired and want to go home, or they’re nervous and scared of what’s behind them and want to get out of Dodge,” says McNabb. “As cowboys, we get to where we push our horses to reach a high speed to go after a cow. When the horse reaches that speed we release the pressure and focus on catching the livestock. The horse doesn’t mind running, but it minds being pushed, and pretty soon realizes if it goes faster you’ll leave it alone. We don’t realize how much horses read into what we’re doing, and with repetition you develop a hot, pushy or jiggy horse.

“You deal with this exactly the same way. You change the horse’s behavior and move its feet in a direction you choose on a pattern to season and condition it. The horse draws confidence from your leadership and the release of pressure.”

Some people think that means just putting miles on a horse to solve the problem, but McNabb says miles aren’t enough. You have to make those miles matter and give the horse beneficial experience in other activities.

“Intensity plus consistency equals productivity,” he says. “When I work a horse, I focus intently on what I want to teach it and consistently work toward that goal. If you’re just loping circles, you’ll have to lope a long time before you really make a difference and you miss out on so many benefits. Instead, maximize those circles by teaching your horse to arc its body, soften in the bridle, drive its hind legs under its body and get balanced.”

McNabb spends time riding in an arena, but he also believes in taking a horse outside and loping circles with purpose, to direct its feet and energy.

“I will ride a small circle, focusing on bringing the horse’s shoulders around and following its nose,” he says. “I ride with both hands on the reins, using direct rein pressure to get the horse to bend its nose to the inside of the circle. I hold that pressure until the horse is soft in my hands, and then I release it. I also hold the horse with my inside leg to disengage its hindquarters, so it relaxes and stops jigging and bracing on the bit. I do this in both directions until the horse lopes balanced circles without pulling on the bit or wanting to leave.”

When a horse is soft in the bridle and moves off rein and leg pressure, McNabb likes to lope circles with the horse’s body in a reverse arc or counter-bend. He starts teaching this at the walk and gradually advances to a trot and lope. If he’s loping a circle to the right, he uses his outside direct rein to tip the horse’s nose slightly to the outside of the circle until he can see the corner of its eye, and then he applies outside leg pressure to move the horse’s rib cage to the right.

“This uses the horse’s natural energy to teach him things that benefit other maneuvers, like flying lead changes,” he says. “I don’t believe there are hard-mouthed horses, but there are hard-headed horses who have learned to tolerate massive amounts of pressure in their mouths and become resistant to it and brace against the bit. My job is to go back and motivate them to embrace sensitivity in their mouths, and I do that with a lot of lateral maneuvers while moving their feet. I can’t stand a horse that throws its head to the side and runs off through its shoulders. Old-timers called it rubbernecking, and it drives me crazy. It’s something we create by doing too much lateral bending without moving the horse’s feet.”

An older, bracey horse might want to lean on the bit, and McNabb says if you allow a horse to do that, it will “treat it like a pillow and go to sleep.”

“Keep driving that horse forward and moving its feet, and you won’t give it the opportunity to go to sleep,” he says. “Keep moving him forward until he softens to the bit, and then instantly release the rein pressure. Repeat until the horse gets soft, light and responsive to the bit.

The most important thing is to keep the horse moving and doing something that is beneficial to other maneuvers. You can also alternate loping counter-bend circles with backing up or riding figure eights between trees with a lead change in the middle.

“The key is to not be defeated,” McNabb says. “Redirect your horse’s path and its energy, and he’ll come back to you and not bully or brace against you.

This article was originally published in the January 2017 issue of Western Horseman.

Road to the Horse in Pictures