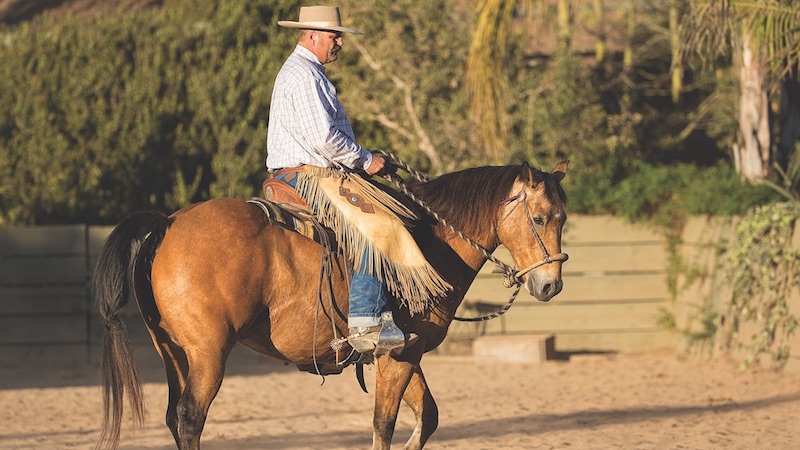 Training with a Hackamore

Bridle horseman Bruce Sandifer explains how training with a hackamore starts with subtle signals in the rider’s seat.

Whether Bruce Sandifer is riding in the arena or working a rodear, his horse has a powerful presence. Fluidly moving in a cadence and a collected frame, and responding to feather-light signals, the horse is seamlessly in tune with Sandifer. Their partnership is based on confidence that comes from the time-honored training system of early Californio horsemen, and the pride associated with the gradual process of making a bridle horse. It all begins with a hackamore.

“I prefer to start a horse in the hackamore, rather than a snaffle bit, because it protects the horse’s mouth as its teeth are changing, and the horse is learning to accept a rider and move its feet,” Sandifer says. “[It is] mechanically consistent to riding one-handed in the bridle, which I ultimately want to do with my horse. Everything I do for a colt sets him up for becoming a bridle horse someday.”

Here, Sandifer explains his philosophy on hackamore training, and offers insight on the right and wrong ways to use this traditional piece of equipment.

The entire Californio training method, including the use of a hackamore, teaches a horse to find balance and is based on a rider’s use of body cues instead of reliance on contact with the reins.

“The point of training a horse in a hackamore is not only to preserve its mouth, but also to teach the horse to work through the center of its body and to learn where to place its feet to work the most effectively,” Sandifer says. “This makes it easier to transition to one-handed riding. To help the horse  figure this out, the rider must teach the horse to feel a disruption of balance [while] in the hackamore and then find the balance again, which is the reward.”

When signaling a horse for movement or a maneuver, Sandifer uses quick, subtle body movements to signal the horse, and tries to avoid using the hackamore with pressure. He first shifts his ribcage or spine slightly to one side of the horse’s spine in the opposite direction he wants to go, while keeping his shoulders and hips square. This disruption of balance signals the horse to move. For example, if he wants the horse to move to the left, he shifts his spine slightly to the right.

“When you move your spine to the side, it creates more pressure on the bars of the saddle on that side and alleviates pressure on the opposite side,” he explains. “The horse will go in the direction of least pressure.”

Your reins come into play as an extension of your body. When you shift your spine to the right, your left hand should simultaneously slightly move the left rein (the direct rein, in this case) and signal the horse to tip its nose in that direction. Your left leg also becomes lighter, opening the door for the horse to move. When you move back to center over the horse’s spine, your right (indirect) rein should automatically follow through, and your right foot becomes lighter, creating balance and a reward for the horse.

“The idea is for the horse to find the center of the hackamore and learn to work in that balanced, neutral spot,” Sandifer says. “You’re trying to get the horse to balance between the two reins. Your direct rein signals the direction you want to go and the indirect rein is the follow-through and ‘gathers,’ or collects, the horse. It keeps the horse’s spine from stiffening so he can reach under himself and round his body for collection.

“The goal is to not apply pressure to the hackamore,” he adds, “but if you do it’s a passive contact in that it’s slow and only used when the horse doesn’t respond to the [rider’s] balance change.”

In that case, he adds a lift-and-drop motion with his hands on the reins to engage the hackamore. In order for the horse to learn to respond to less rein contact, the rider must offer a neutral place to which to return after disrupting the balance to signal for a change in the horse’s direction or speed. That requires the rider to be balanced in the saddle.

“If you look at old Californio saddles there was a deep, flat seat, not the rise that there is in today’s saddles,” Sandifer says. “It put the rider in a classical seat, with straight alignment from shoulder to hips to heels. The rider had a pivot point and when he disrupted the balance by moving away from the center of the horse’s spine, rather than making direct contact with the horse’s mouth, it signaled the horse to move. For example, the rider might put a leg against the horse’s side to block movement in a direction and move the leg away to open the door in [the other] direction.”

With practice, the horse learns that shifts in balance signal it to do something, and move in a collected frame without the rider making a lot of contact with the mouth or on the nose. This approach helped early Californios ride long distances and work cattle over several long days without causing their horses pain from contact. Today’s horsemen can achieve the same thing by understanding some of the ways they help or hinder a horse in the hackamore.

A common mistake riders make is holding their hands too wide and using direct rein pressure to pull a horse around. This causes the horse to hollow its back, drop its shoulders, and lose collection and balance.

“Bend is created through the center of the horse, not the face or spine,” Sandifer says. “When your horse is standing straight, if you draw a line from your chin to the horse’s chin, the horse’s spine should be in between that point and the horse should stay there. As soon as you get wide with your hands, the heel knot moves side to side, and the horse’s head tips.”

Wide hands can also cause a rider to pull the horse’s chin out of alignment, rather than bending the horse’s body around the rein. This disconnects the horse’s head and neck from the body, and if done often, the horse will learn to use this disengagement to avoid getting soft throughout the body.

Sandifer says the hackamore works best when your hands are held about the same width as the hackamore and you use a lift-and-drop motion, rather than pressure and release, to signal a horse to do something. You lift the rein just enough to signal the horse, and drop it right away rather than holding pressure until the horse responds.

“By keeping our bodies soft and using a lifting and dropping motion directly over the horse’s spine and keeping our spine centered over the horse’s, we create collection through its spine, not the neck or head,” Sandifer says. “And that’s what we want in a bridle horse.”

This article was originally published in the June 2015 issue of Western Horseman.