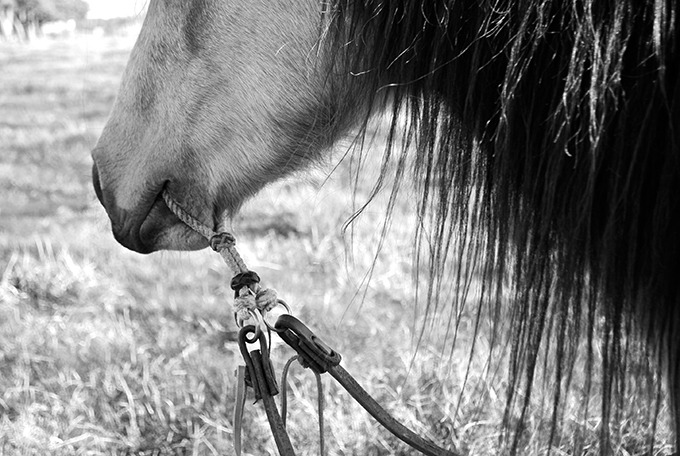 Riding with a War Bridle

My new bridle has no headstall, but it’s the ultimate old-school, American piece of tack.

I received a new bridle to try the other day.

Did I mention that a headstall for this is completely unnecessary?

The bridle is basically a piece of rope with a small metal ring on each end (which attach to reins), and a braided rawhide slide creates a loop in rope. It’s a modified Native American war bridle.

I’ve seen war bridles in different movies and history books—and in plenty of Remington paintings of Apache scouts riding skinny horses—but had yet to ride a horse in one. Once in a great while I’ve seen someone use a war bridle in real life, and it always causes me to do a double-take. It’s rather unusual to see a horse ridden with no headstall.

Native Americans usually rode their ponies with a hide-based cord that looped around the horse’s lower jaw. As they were exposed to more explorers, settlers and horsemen, they eventually adopted a more traditional European saddle and bit, and the war bridle became a thing of the past.

As with any bit, the war bridle can be a severe instrument when utilized incorrectly. It puts the rider in very direct contact with the horse’s mouth and allows for only limited left and right motion. Those who I have talked to about using one have recommended riding a horse that’s used to packing a bit with leverage and is broke to neck reining.

My mare was smooth with the transition and took to the war bridle really well. To be honest, it didn’t feel much different to me in her mouth than a traditional Spanish bridle with a headstall and reins. We moved some colts around, practiced a little reining pattern, performed our turnback duties for Luke and even got a double-take or two from visitors.

I’ve enjoyed using my new piece of equipment. I don’t think it will replace anything that I already use, but it’s a fun and different addition to my ever-growing collection of gear. It’s probably not for everyone to utilize in every situation imaginable horseback, but I must admit the war bridle was fun for me to try.

I felt like I’d just set down my tomahawk, escaped the white men and trotted right out of a Remington painting.

I mean, with a better-fed horse, of course.

Gearing Up: Tack and Equipment