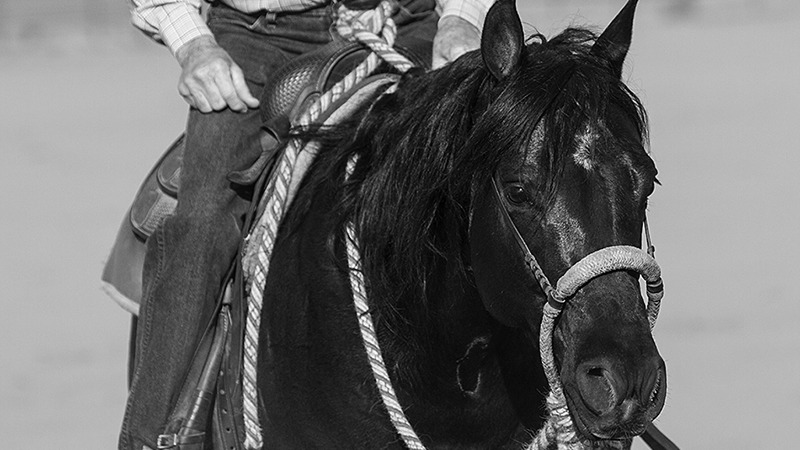 It’s easy to develop a relationship with a friendly, in-your-pocket horse. But garnering a partnership with a standoffish horse is well worth the patience and time.

I appreciate a simple, sociable horse—the perfect horse. Most of the horses we ride are raised to be gentle, accepting animals that spend their lives getting seasoned and accustomed to many different people handling them. Certainly, some start out skeptical or wary, but are often won over by kind scratches and feed twice a day. They are tolerant—heck, even welcoming—of human attention and generally forgiving of small mistakes.

But every once in a while, a horse comes along that bypasses all of these characteristics. It takes time, patience and a lot of feel for him to be won over, and when he is, it’s not a universal feeling. He’s not the type that you send your nephew out to catch, or toss your friend’s kid on his back for a pony ride. Sure, he’s accepting, willing and gentle, but only for the person he’s accustomed to.  He’s the one-man horse.

These horses seem to be few and far between. The one-man horse is often a skeptical creature that is aware of even the tiniest changes in his surroundings. He will go out of his way to avoid people that aren’t his own. In fact, he can even be dangerous to someone who doesn’t take the time to understand his sensitivity. The few that I have known are almost impossible to catch if attempted by a stranger, and if that person does somehow get him saddled and ready to go, it’s possible that he might get pitched off.

He is quirky, intelligent and opinionated. If you stumble or kick a rock or mishandle your halter when walking out to catch him, you may not be riding him that day. But if you are smooth and give him a little time, he will often be one of the best mounts in your string. The ones that I have known have a lot of heart and proceed forward with their jobs with caution and awareness. Once you have his trust, he works hard for you.

My father-in-law, Bryan, and I were speaking on this subject the other day and he explained to me that he once had a Mustang stallion that fell into the category of a one-man horse. He was sent to Bryan by the BLM, to have a future as a using horse by the employees to ride and gather other wild horses. Bryan started this horse like any other and said he was a gentle and willing partner with a little time. However, he noticed how funny the stud was about any small change in his surroundings, whether a pickup was moved in the yard, or wood was stacked differently on the pile, or anything of that sort. Bryan got a good start on the horse and had the fella who was in charge of the chestnut Mustang come out and watch him ride. All parties were pleased with the outcome, and it was time for the stud to go on with his training somewhere else.

Well, months later, Bryan ran into the next trainer, started talking, and that same Mustang came up in their visit. The other fella said, “They told me when they sent him to me that you had that colt riding and going, flapping your tarp and looking good. I can’t even catch the skeptical sucker!”

Bryan was surprised by that news and told the guy that he would stop by on his way home one day and see if he could be helpful. Although a good amount of time had gone by, Bryan walked right out to the pen, caught the stud (who was now a gelding), and went to riding him like it had been done the day before. Bryan told himself that from then on, he would work to the best of his abilities to make sure that his horses were accepting and happy to have handlers other than himself.

That’s not to say that a horse with these tendencies can’t adjust to a new rider. They just need a good dose of patience, time and understanding. And certainly, different horses have different levels of wariness and varying tendencies when it comes to being a one-man kind of horse. But it does make it difficult to just slop someone else up in the saddle and expect them to get along as well as you do when you’ve got one of these special type of equines.

Now, other than pure flattery for the person, I’m not sure if there’s a real advantage to having a one-man horse. I don’t know if they are more or less intelligent than other horses, and I don’t know if it’s something that’s “cured” with enough time, effort and people handling them. But I do know that they are a rare and interesting type. They teach a person how to throw away expectations and timelines. They make us step up and be better horsemen in order to get the most out of them. And sometimes their quirks can even be endearing.

Yep, I love an easy-going, amiable gelding. They make life easier for most people and they often require less feel to find success. But I’ll be honest, there’s a special appreciation in my heart for the ones who make their person work for their trust, as they are often willing to give their all.

Sometimes it’s good to remember that there is reward in something earned.

Down in the Dirt