There is no shortage of highlights at the World Championship Ranch Rodeo. Personally, it’s a thrill to cover the event in Amarillo, Texas, each November. Here are my Top 10 moments from the 2018 WCRR, writing from the point-of-view of a photographer.

10. Angry Cows. There were quite a few irritable bovines this year, including this tail-twisted, black mama in the wild cow milking. I’m sure Jared Fraze of Crossroads Ranch is used to being the pursuer, rather than the pursued, whenever he’s roping. Despite the reverse roles, he managed to fit a loop on this cow and helped his team record an impressive 43.39 time in the event.

9. Versatile Horses. While the rest of the contestants exited the arena during a break, Chics Shooting Star stayed to help the Mexican trick roping crew entertain the crowd. Afterward, the gray gelding resumed his duties for Tripp Townsend and the Sandhills Cattle Co. team. 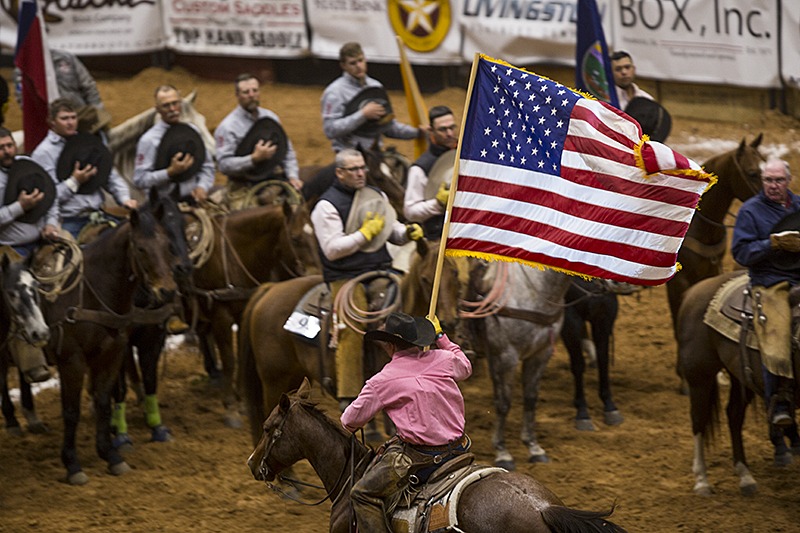 8. Bare-Headed Cowboys. This, of course, applies only to moments during prayer and presentation of the Stars and Stripes to open up each performance. I’m proud that our Western culture continues to show respect for our country and the men and women who have fought for our freedom.

7. Show Stoppers. Logan Anderson and Brite Lil Flashlight traveled from Arizona and won the Senior Class of the Ranch Horse Association of America show, held in conjunction with the WCRR.

6. Top Hands. The WCRR is loaded with talented, handy cowboys. Each year one of them is given the Top Hand award, and this time it was earned by Justin Peterson of Haywire Cattle Company in Kansas.

5. Cowboy Collectibles. The trade show held during the WCRR is one of the best in the country, with a jaw-dropping number of bits, spurs, saddles, boots, hats, Western furnishings, jewelry, ranch equipment, and more. Here, Larry Peck displays some highly collectible Adolph Bayers bits and spurs.

4. Dynamic Duos. Trail Townsend and TRR Lucky Playgun make a good team, and the two from Earth, Texas, locked up another title by winning the Senior Youth Cow Horse Championship. They competed against 15 other talented young horsemen, proving that youth involvement in ranch horse competition continues to grow.

3. Wild Rides: The ranch bronc riding is one of my favorite events. Here, Ty Swiler of Beachner Bros. Livestock hangs on for a qualified ride, one that helped him earn the Reserve Top Hand title.

2. Gritty Cow Ponies. Don’t tell Barbarosa that the cow he’s chasing probably outweighs him. In the Junior Youth Cow Horse Championship, the little horse set up Levins Peebles for an accurate roping shot, then sunk every ounce of his body into the arena dirt in order to stop the cow.

Tip Your Hat to Tugboat