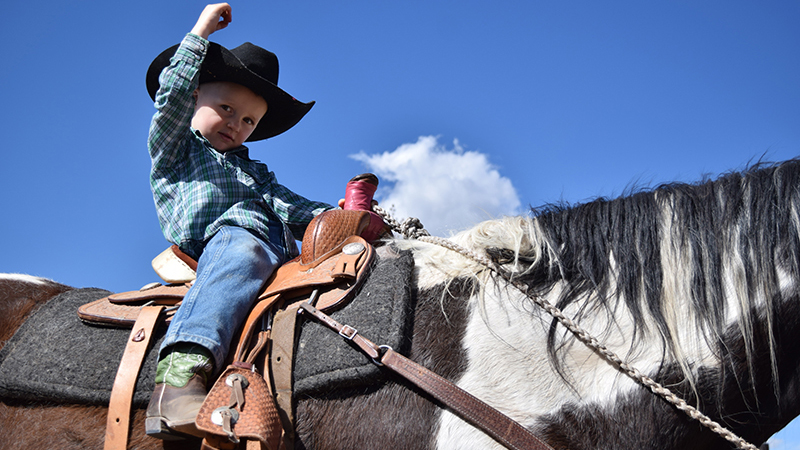 Life Lessons from a Young Cowboy

A young buckaroo shares his outlook on life, and we all might be better for it.

Wisdom is often attributed to those who have added a few decades to their life’s story. But, sometimes the youngest among us have the most to teach. Here are a few lessons I learned from watching my 3-year-old son Milo.

1. Never pass up a chance to run through a mud puddle. These micro-playgrounds are free of charge, naturally occurring, and the source of endless possibilities for sensory exploration. They splash, squish, churn and plop. You can make mud pies, paint stripes on your forehead, or throw handfuls at your sister.

2. When you find you have dug yourself into a hole, jump in feet first. Conventional wisdom says to drop the shovel and stop digging, but a young cowboy’s wisdom says to hop in and check out the view. Because a big hole in the ground can sometimes be a cool hangout, one that offers a fresh perspective on the world.

3. You gotta do your time in the practice pen if you want to walk up to the pay window. A general guideline is to throw 10 head loops and 10 heel loops at least once a day. Or, if you lose track when counting higher than eight, throw seven loops then say “eight” for the next three loops.

4. Dress for the job you want, not the one you have. In the picture below, young Milo is fully outfitted in his bull riding attire, right down to his chaps and leather glove. He might be holding a horse for the shoer, but in his mind, he is ready to step on a bad one and nod for the chute at any moment. Even at age 3, he knows that luck is when preparation meets opportunity.

(Also, reach down and pet a friendly ranch dog as often as possible. It’s good for the soul. And it’s good for the dog, because they can’t pet the top of their own head.)

5. Thirst is best quenched from a garden hose. It’s the same water that is pumped into the house and dispensed through the kitchen sink, but it tastes crisper, cooler, and more refreshing when consumed outdoors straight from the hose.

6. Stick your hand in the air and spur for 90 points every time you swing into the saddle. It doesn’t matter if you’re sitting on a gentle kid’s horse in the backyard; attack every ride like it’s the TV pen at the Wrangler National Finals Rodeo. Because one day, you might find yourself riding a bronc at the Thomas & Mack, and it would be a major bummer if you weren’t mentally prepared.

7. Feel free to answer the call of nature when outdoors. But be a gentleman and discreetly turn your back. Also, don’t pee on your mom’s rosebushes. She doesn’t like that.

8. Always carry a pen in your shirt pocket. You never know when you will need to jot down an important note regarding cattle numbers, weaning weights, your opponents’ bull riding scores, or the winning ‘x’ in a game of tic-tac-toe.

For Cowboys, Social Distancing is Nothing New

Four Reasons to NOT Marry a Cowboy

A Cowboy for Christmas

Between the Bedroll Sheets: It’s Not What You Think

Date Night at the Cookhouse