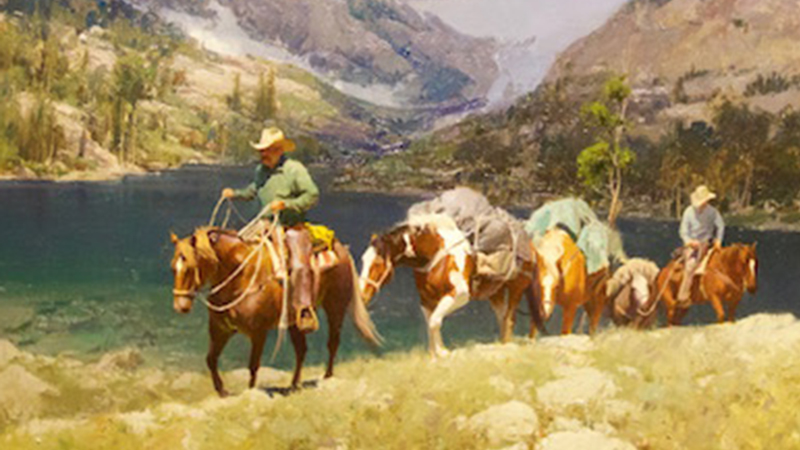 Arizona artist Bill Anton paints 22 original pieces for his one-man art show, “Under the Spell of the West.”

Creating 20 paintings in less than a year is no small feat for an artist, but Bill Anton rose to the challenge and even exceeded it. He painted 22 original pieces for his first one-man show in 18 years held last March at Legacy Gallery in Scottsdale, Arizona. Emerging and established collectors from all over the United States attended the sell-out show hoping to take home a piece of the West.

“Bill’s authenticity and passion about his subject matter keeps collectors coming back to his work,” said Brad Richardson, co-owner of Legacy Gallery with his wife Jinger. “[To Bill, Western art is] not just about capturing today’s American cowboy, but the feelings and emotions they experience.”

The morning before the show, Anton took gallery guests behind the scenes of his paintings in an intimate discussion about their development, from selecting the subject matter to sketching and creating studies, to adding the final touches. He even displayed some of his sketches and studies beside the finished paintings to show their evolution.

“Bill’s methods are of [Frederic] Remington, [Charles] Russell, John Clymer, Tom Lovell and Frank Tenney Johnson,” Richardson said as he introduced Anton during the presentation. “These are proven methods for hundreds of years–they are the process of how you build a great painting.”

Without much formal art training, the key to Anton’s artistry is passion.

Fortunately, for contemporary cowboy artists like Anton that is a thing of the past. However, it still takes years of experience and dedication for a Western artist to prove himself and establish a base of loyal collectors.

“I had to really want to do this,” he explained. “It required an awful lot of work because the great art schools disappeared after World War II and nobody was teaching drawing or painting.

“It used to be if you wanted to be an artist you had to draw for 7 years before you were even allowed to pick up a paintbrush. And only the elite got to progress.”

Raised in Chicago, Illinois, Anton first visited the West when he was 7 years old and felt something special. In the 1970s he attended Northern Arizona University in Flagstaff, Arizona, and found his muse in northern Arizona. He studied with master artists such as  Ned Jacob, Michael Lynch and James Reynolds. In 1982, he became a full-time artist and began visiting local ranches and riding out horseback with the cowboy crew to learn about their ways with horses and cattle.

Through the years his art has received awards at such prestigious art events as the Prix de West Invitational Art Exhibition & Sale at the National Cowboy & Western Heritage Museum in Oklahoma City, Oklahoma, and the Masters of the American West Art Exhibition and Sale at the Autry Museum of the American West in Los Angeles, California. More importantly, however, ranchers and cowboys respect Anton’s work for its authenticity and how it reflects not only the ways of the cowboy but also the deep connection between a cowboy, livestock and the land.