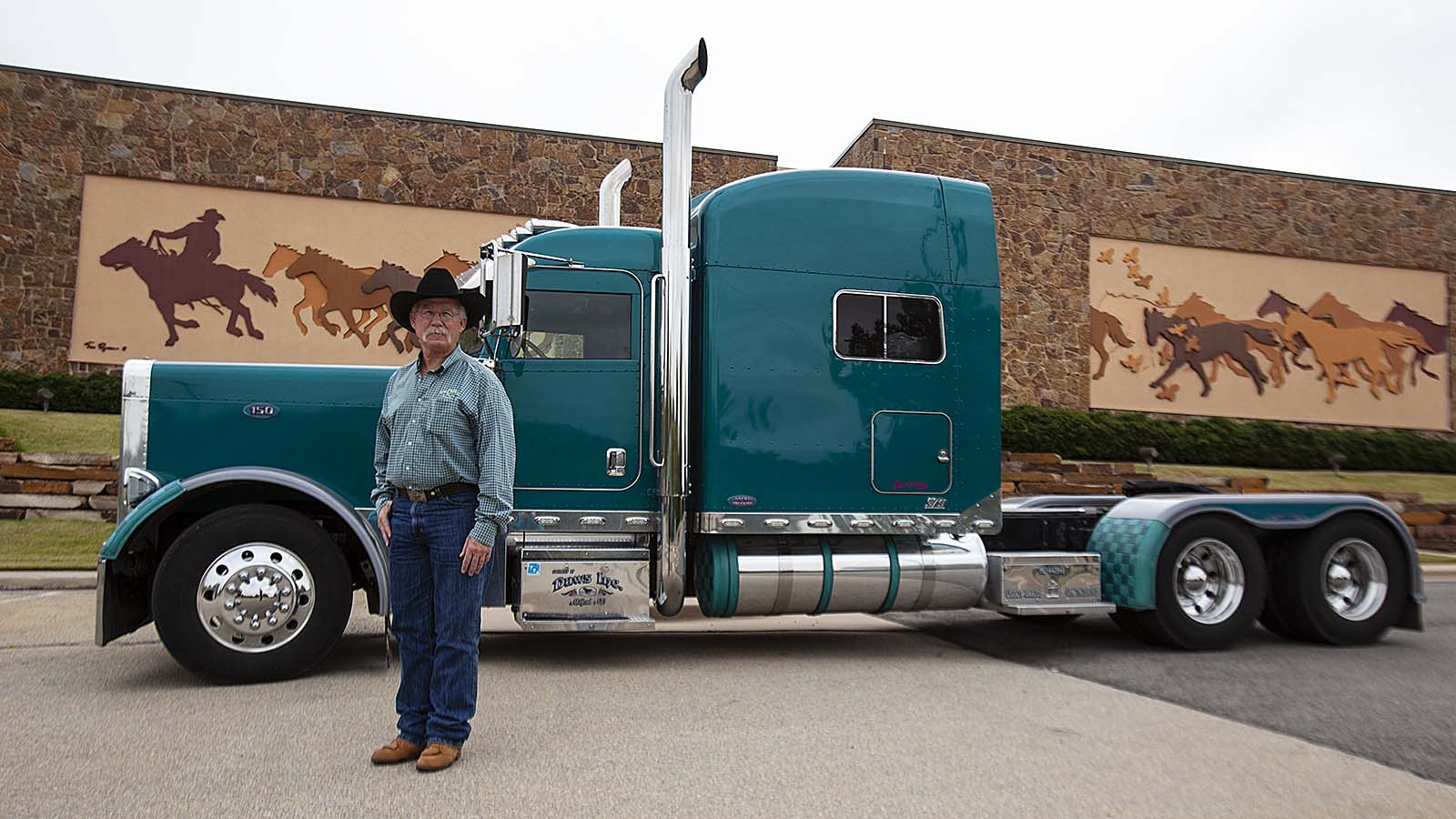 Over-the-road driver Rick Linneman tricked out his truck in Western style as a way to honor the cowboys and makers he reveres.

Truck drivers are unsung heroes of the highway, spending the majority of their lives crisscrossing the country from one point to another with few stops in between. During the COVID-19 pandemic, their dedicated service in the transport of essential food and supplies has become even more apparent and acknowledged. Rick Linneman of Gillette, Wyoming, is one of the veteran truck drivers going down the road, but at the core he’s a cowboy.

Driving a shiny teal Peterbilt 379 he calls “Cowboy Pride,” after an Ian Tyson song, he’s logged more than 1, 700, 000 miles since he bought the truck brand new in 2007 and more than four million miles since he started driving in 1973. Though he’s had several trucks, Cowboy Pride is likely his last, and he wanted to make it special by paying tribute to hard-working cowboys, Western artists and gear makers. Neatly displayed inside the truck is a museum-quality collection of Western art and gear made by a who’s-who of cowboy artisans, including Bill Black, Don Butler, Mark Dahl, Douglas Krause, Todd Hanson and Karmel Timmons.

Cowhide inserts from Dave Hack of Idaho line the interior. A pair of leather cuffs from Butler wrap around the arm rests, one of the last pieces the Wyoming saddlemaker made before his death in 2014. The plate at the base of the gearshift is a square of leather hand-tooled with a hackamore horseman by Bob Walden of Montana. A pair of tooled leather saddlebags by Monte Beckman of Oregon and a leather logbook cover carved by Andy Stevens of Wyoming lay on the passenger’s seat. A hand-engraved horn cap Linneman bought from Rick Bean in Idaho is the centerpiece of the steering wheel, and Nevada engraver Mark Dahl created a cap for the polished wood gearshift knob. A pair of conchos from Todd Hanson adorn the air-brake buttons. A half-scale quirt braided by Black hangs from the horn, and a horsehair stampede string from Roger Clark is on the CB radio. In the sleeper is a horsehair mecate made by John Silva tied in an alamar knot and flanked by two Karmel Timmons art prints. There also is a rawhide reata braided by Jim McKinney of Nevada.

Linneman rotates pieces from his vast collection between his house and home, and he has a story about each piece, its maker and his trips throughout the West. Although it can be difficult to park a 72-foot long semi and loaded flatbed trailer in town, Linneman occasionally finds a good spot and takes a taxi to attend Western events and visit museums. He also meets with his cowboy and craftsmen friends along the way, who value his friendship and patronage through the years.

“I’ve always enjoyed art and gear,” says Linneman. “I’m honored to have such awesome friends who are so talented; I enjoy each and every one of them. We have a brotherhood.”

Displaying pieces from his friends not only makes Linneman’s truck feel like home, but it also keeps him connected to the cowboy lifestyle he’s loved since he was a kid watching Western movies and reading Will James books.

Linneman was born in Douglas, Wyoming, but his family moved around Wyoming throughout his childhood. He always thought of Powell, Wyoming, as his home.

“We moved there when I was in eighth grade and that’s where I really blossomed,” he recalls. “My dad was a truck driver and we lived in town, but there was a livestock auction yard nearby and I’d go there and look at the horses and cows. The owner became like a grandpa to me and taught me a lot. He gave me a job before I was old enough to legally work, and I stayed until I graduated from high school.”

With the money he earned, Linneman bought a horse and tack, and he also joined FFA to learn about horses, livestock and agronomy in hopes of one day working on a ranch.

“If I wanted something I worked hard to earn money to buy it,” he says. “My parents told me we couldn’t afford to get me a horse, so I bought my own and kept it a secret from them for six months. I didn’t ask for handouts; I paid for everything.”

After high school, Linneman worked for a sheep farm and cowboyed before becoming a truck driver. However, he really wanted to go to Nevada and buckaroo.

“I’d seen all of the silver bits and spurs and read about the buckaroos [in Nevada] and wanted to go out there,” he says. “I wanted to earn enough money to get a horse trailer and head West, but I didn’t make it.”

During his 47 years of driving, Linneman did take a few hiatuses to do other jobs, such as manage a ranch for the Murphy family in Wichita, Kansas, who raised and showed Quarter Horses. He also got married and raised his son, Shawn, who works on a ranch south of Gillette, Wyoming, and has a 12-year-old granddaughter and 14-year-old son who are both interested in riding horses.

Though Linneman rarely gets to ride, he does have a 13-year-old Paint Horse he calls “Jake.” Lonnie and Julie Lorton in Galeton, Colorado, cared for the horse while Linneman was on the road, and Julie showed the gelding in Western dressage. Today, Shawn keeps the horse on the ranch for his family to ride.

While he’s driving, Linneman can’t help but think of the old-time cowboys and teamsters who transported freight in horse-drawn wagons or plowed fields with horse-drawn combines like his grandfather. Cowboying and truck driving have some similarities in that the cowboy and driver are both moving a product and often work solo. Both also take pride in their equipment and heritage.

Though he’s at an age when most people want to retire, Linneman doesn’t foresee permanently parking his truck anytime soon. However, he does make it home a little more frequently than the six to nine weeks he used to spend on the road. He enjoys watching his grandkids ride their horses and spending time with his wife of 11 months, Zane. The newlyweds recently purchased a home in Gillette, where Linneman’s vast collection of Western art and gear is on display like in a gallery or museum. There are paintings by Maria D’Angelo and Bill Owen, bronzes by Steven Lee and Jason Skull, the only saddle made by Mehl Lawson, and spade bits, hackamores and California-style gear galore.

“[My collection] is something I treasure and value in my heart, something I want to pass along to my grandkids,” Linneman says of his collection. “It reminds me of the wonderful people I’ve met and the [carving and engraving on the gear] flow like the lines of the highway and in life. They go up and in circles, but they’re constantly flowing.”

Lessons on the Fence