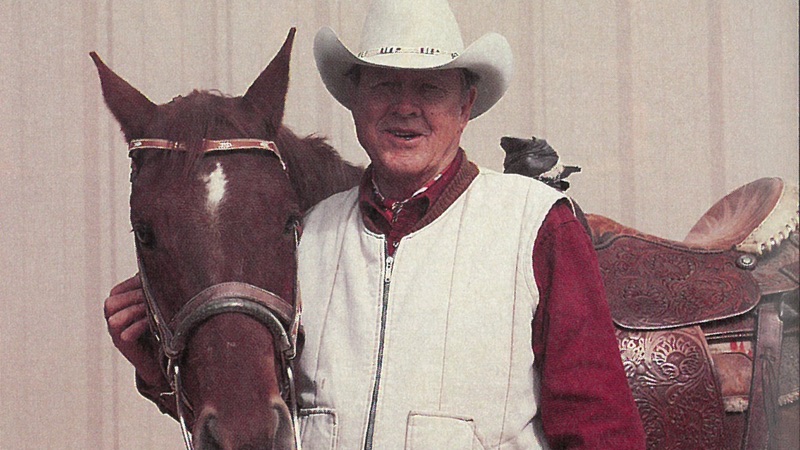 Ben Johnson was the World Championship Team Roper in 1953, and he won an Academy Award in 1971. And he has a hard time deciding which honor he is most proud of.

By DARRELL ARNOLD, originally published in the August 1989 issue

“Young people, today, need to have three things in their lives—honesty, reality and respect. If they’d listen to someone who is real and honest, and if they’d respect themselves, they wouldn’t get involved with drugs and have so many problems. The kids who get in trouble just didn’t get the right kind of milk at home. They didn’t get any help.”

Those are Ben Johnson’s words, and they help explain why this Oscar-winning actor and world-champion cowboy spends so much of his spare time at charity events where children are the benefactors. The Ben Johnson name is on celebrity rodeos around the country, including Houston, Fort Worth, Phoenix, Oklahoma City, Reno and Los Angeles.

Ben says, “We’re getting calls every day from all over the country, where other folks want us to put on a rodeo for them. But, I’ve just about loaded my boat. I spend so much time helping get money together for other people,” he says with a grin, “that I can hardly take time to make a living for myself.”

But Ben has already managed to make a pretty good living, and he is generous with his time. He is always willing to sign an autograph, shake a hand or donate time to help other people.

The world recognizes Ben Johnson as a cowboy. Not just a movie cowboy, but as a bona-fide, real-life cowboy. He is as well known and respected at ranches and rodeos as he is in Hollywood, where he has worked for almost 50 years in the motion-picture business.

Ben was born in Foracre, Okla., on June 13, 1918. His father, Ben Johnson Sr., had a place on Bird Creek, northwest of Pawhuska. The senior Johnson was a respected rancher and champion roper, and is an honoree in the National Cowboy Hall of Fame. And Pawhuska honors Ben Sr. every year with a memorial rodeo named after him.

Ben Jr. grew up in the Pawhuska area, cowboyed on the Chapman-Bernard Ranch, and rubbed elbows with some accomplished rodeo cowboys of that time – such names as Ike Rude, Everett Shaw, Louis Brooks and Clark McIntire. Ben liked rodeoing, too, and it is likely that he would have pursued rodeo as a career had it not been for a chance encounter with people who were making a movie for Howard Hughes.

It was around 1940, and Hughes was making The Outlaw, starring Jane Russell. His crew bought a load of horses out of Oklahoma, and Johnson was asked to deliver them to the movie location near Flagstaff, Arizona.

At the time, Ben was working for $30 a month, and the $300 he was offered was more than he could pass up. After the shoot, he took the horses on to Hollywood, and that’s where he stayed.

Ben says, “They decided I rodeo a horse pretty good, so they put me in the Screen Actors’ Guild, and I went to work as a wrangler, stuntman and as a double for actors like John Wayne, Joel McRae and Jimmy Stewart.”

Then, in 1949, Ben was offered a 7-year contract with famed director John Ford. The contract was for up to $5,000 per week, and Ben signed immediately “before Ford had a chance to change his mind,” Ben explains.

Ben went right to work on such films as Wagon Master, Mighty Joe Young, She Wore a Yellow Ribbon, and Rio Grande. And in Rio Grande, he and fellow actors Claude Jarman Jr. and Harry Carey Jr. did their own stunt work in a spectacular Roman-riding scene that’s still a film classic. Anyone who views that scene can easily see that Johnson is a real horseman.

Despite his movie success, Johnson still felt he had something to prove to himself, so, in 1953, he took a year off and hit the rodeo circuit. He had been rodeoing all along between movies and, in 1949, had set a calf-roping record at Pendleton, Ore., where he roped and tied in 12.5 seconds with a 60-foot score. “I really thought I was something,” says Ben.

He continues, “I got in a position where I could afford to travel, so I decided to see just what I could do.” He teamed with Buckshot Sorrells, Andy Jauregui and others in the team roping.

“That was the year everybody else had hard luck,” says Ben, modestly, “and I beat them out and won the world. I came home with a championship, and I didn’t have $3. All I had was a wore-out automobile and a mad wife. Fortunately, they let me back in the picture business, and I’ve stayed there ever since.”

Since his movie career began, Johnson has appeared in more than 300 movies. Some of the better-known are Fort Defiance, Shane, War Drums, One-Eyed Jacks, Major Dundee, The Rare Breed, Will Penny, The Wild Bunch, The Undefeated, Chisum, Junior Bonner, The Getaway, The Train Robbers, Dillinger, The Sugarland Express, Bite the Bullet, Breakheart Pass, and The Swarm.

But despite the great number of movies, Ben Johnson was never a household name until 1971. That year, he won the Academy Award for best actor in a supporting role for his portrayal of the pool hall owner in The Last Picture Show, a movie from the Larry McMurtry novel of the same name.

“The Academy Award changed my whole life,” says Ben. “You win one of those Oscars and all at once people think you know something. You don’t know any more than you did before, but they think you do. And the studios offer you more jobs for a lot more money.”

Like other westerners, Ben would like to see Hollywood make some good western movies again, but he’s not sure they will ever be done as well as they were in the old days. “It’s hard to find young people in the business who know anything about the real West. A lot of them don’t know whether a horse roosts in a hole or a tree. Most actors can’t ride well enough to get in and out of a scene. They’re about as western as my poodle.”

And Johnson explains that cost is another factor. “When they made Heaven’s Gate, they invested $50 or $60 million in it, and it busted all those people. They called it a western, so after that anytime somebody mentioned a western, they all ran backwards.

“It’s very expensive to make an authentic western. It’s almost impossible to afford to have 1,000 head of cattle in a movie. It is just very difficult to finance, produce, direct and act out a good western.”

Johnson does own the rights to a very good western novel, The Cowboy and the Cossack, written by Clair Huffaker. He has a company interested in doing the movie, which involves cowboys and a herd of cattle in Russia, and the present atmosphere is ideal for getting the movie accomplished. Ben is hopeful he can bring this good western to the screen.

In the meantime, he spends his time doing other movies, participating in team roping at his celebrity rodeos, and relaxing at his recently completed new home outside of Phoenix, Arizona. “I keep a few head of horses in Oklahoma, and near my home,” says Ben, “on my nephew’s place. I get on one now and then.”

On a shelf in Ben’s home is a cluttered collection of awards that Ben has earned through the years, including his Academy Award, a People’s Choice Award, Golden Boot Award, New York Film Critics Award, Golden Globe Award, and more. And last December, Ben was honored at a Ben Johnson Roast at the National Finals Rodeo. But for all the public acclaim, Ben is most rewarded when he is able to help young people through charities associated with his celebrity rodeos. His big heart and generous nature have made him a favorite of everyone who has met him. Uncle Ben, as his close friends are wont to call him, is the real thing – a real American cowboy who exemplifies ideal cowboy standards.