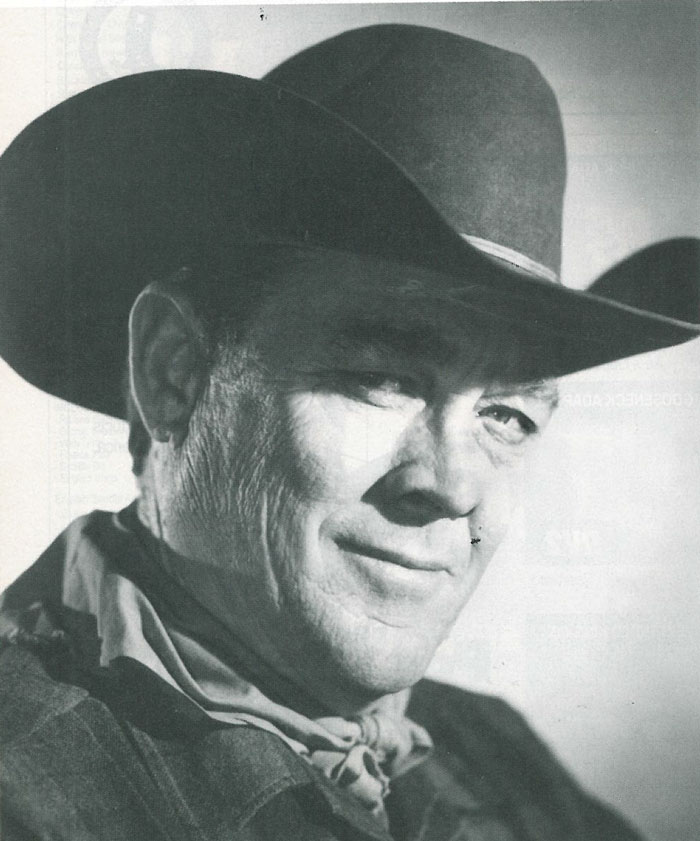 “I Can Hold the Horses”: Ben Johnson

As an actor, Johnson often portrayed a cowboy, a character he knew well because he was one.

Soon after Ben Johnson won the 1971 Academy Award® as best supporting actor for his role in The Last Picture Show, a Hollywood mogul invited him to his office to discuss a new project. Ben, of course, knew that the Oscar® usually makes its recipients extremely bankable, at least for a while. He also knew this man wanted to capitalize on his Oscar, and he could see nothing wrong with that, except that the man probably thought Ben didn’t know his own worth because he was only a cowboy.

Ben said that this mogul didn’t know a picture about a horse from one about Godzilla; he didn’t know an actor, an extra or a director from an automatic dishwasher. He did know what his money could buy, and he liked to buy people he could use to make him more money.

After the mogul directed Ben to take a seat, he said, “Now, Ben, you and I are about to do a picture that will make you famous all over the world. I’ll pay you more money than you ever dreamed of and spend three times more money on the production than any other cowboy picture ever cost. You can have your pick of any glamour queen in Hollywood for your leading lady. You’ll be dressed-up, paid-up, hyped-up, and your name held up in lights as the premier cowboy star of all time. What do you think of that? Are you up to it?”

Ben had listened intently. He straightened and cleared his throat. “I only know one thing for sure,” he said.

“And what’s that?” asked the mogul.

“I can hold the horses.”

Ben always treated his moguls the way he’d treated Brahma cattle when he was a top hand at age 17 for Chapman-Barnard in Oklahoma. When he wanted to get them somewhere, he made them think they were getting away. His cowboy dedication, which put the welfare of cattle and the making of good horses first, worked well with moguls, too.

Nothing came of that meeting. All the mogul could see, when he looked at Ben, was the Oscar. He thought the award validated the man. He didn’t know that Ben would’ve partnered with anyone who tried to do right while he made pictures that made people think, delivered a message or made people laugh. He couldn’t see what most of the rest of the world saw in Ben, Oscar or no Oscar: a totally honest man who lived the cowboy way.

Ben threw in whole-heartedly with moviemakers, such as John Ford, John Wayne, Howard Hughes and Peter Bogdanovich, because they wanted him in their pictures for the cowboy that he was, not for the kind of actor who could be paid to do and say anything they wanted.

Ben and I met in 1953. The year before that, Vivian Brown, my dad, let my cousin, Buckshot Sorrells, try a young horse we owned, Spot, on the rodeo circuit. Buckshot agreed to pay $1,500 dollars if Spot worked out. Buckshot won the all-around (title) at Cheyenne (Wyo., Frontier Days) five times. He always roped the head in the team roping, had won several championships in roping and bulldogging in the International Rodeo Association (now International Professional Rodeo Association), and had won the Rodeo Cowboys Association (now Professional Rodeo Cowboys Association) team-roping championship in 1950. He always ran close to the leaders in competition, and Spot carried him to the money throughout 1952.

Ben was under contract to make movies with producer-director John Ford at that time. His father, Ben Sr., had won several steer -roping championships, and Ben wanted to try for a championship himself. He had never been able to afford to rodeo full-time, but now his work in movies had pumped him up, and he asked Ford for a year ‘s leave of absence. Ford gave him 1953 off with pay.

Ben had started in the movie business as a wrangler with Buckshot on Howard Hughes’ picture The Outlaw. Early in 1953, Ben began to travel with Buckshot and to rope the head on Spot, and he stayed in the money.

The horse still hadn’t been paid for, and my dad knew that Buckshot and Spot were doing well. He decided enough was enough when he heard that Ben was winning on him, too. We hooked up a trailer and caught up with them at the Las Vegas rodeo in May, intending to bring home the money, or the horse.