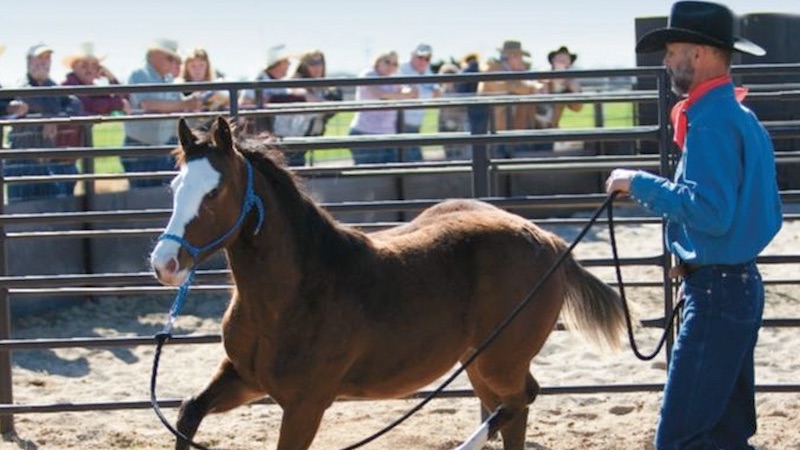 By DARRELL DODDS, originally published in the May 2007 issue of Western Horseman

Although the sale wasn’t scheduled to begin until after lunch, writer Frank Holmes and I arrived at the Potter Ranch outside Marana, Arizona, shortly after sunrise to take a peek at the day’s offerings before the crowd arrived.

Holmes and I have been working together, covering horse sales as well as other equine events, for more than 25 years. And while the major breed- and special-discipline sales have their allure, it’s ranch production sales that get our juices flowing. After all, when a breeder invites the public to come on his property, evaluate, then bid on his stock, there’s more at risk than revenue. The man’s pride and prominence as a horseman are at stake.

Even at the early hour, small armies of denim-shirted ranch hands, as well as friends of the Potter family, were busy grooming horses, applying lot numbers and preparing for the roping and barrel racing demonstrations scheduled for later in the morning.

In rodeo circles, Driftwood-bred horses are legendary performers, especially as rope, steer wrestling and barrel horses, where short-distance speed is a must. On this day, Mel Potter’s production sale would feature more than 70 Driftwood mares, colts and geldings, an offering sure to attract a large crowd of enthusiasts.

Around mid-morning, several top PRCA ropers were on hand to help Potter demonstrate the abilities of his young horses in training, as well as those of a few seasoned campaigners. With all the excitement in the main arena, it was easy to miss a lone, red-scarfed figure working in a round pen, quietly longeing one yearling after another for the benefit of potential buyers.

While it was obvious that some of the yearlings had been handled, it appeared that some had spent most of their lives in the pasture. But the cowboy handled even the freshest colts with extraordinary skill and patience.

One sorrel filly seemed particularly agitated by the whole affair and was doing what she could to escape his control. In situations like this, some handlers might simply make short work of the trouble-maker and get another, more seasoned colt. But this horseman stayed with her, gently bumping the rope halter a time or two, then applying pressure to her left hip, then her right, until she began yielding her hindquarters. In a matter of minutes, he had her trotting soft circles, first to the right, then to the left.

This is no ordinary cowboy, I thought. Even in a challenging situation, he managed to show the filly without a hitch.

The man at the center of the pen, I discovered, was Larry Todd, a rancher from Willcox, Arizona, who’s been starting colts for the Potter Ranch for the past five years. Although he and his family own and operate a cow-calf operation east of Tucson, Todd’s passion is starting young horses, and he pursues his interest with dedication and an open mind. Originally from Montana where he and his family ranched, he began riding colts for other people when he was just a boy.

A few weeks after the sale, I had a chance to visit with Todd and learned that the lightness he’d exhibited in the round pen on sale day wasn’t a fluke. Not only had he received a great foundation in training from his father, he’d been studying the masters and practicing horse handling techniques most of his life.

“One of the guys I was riding for in Montana gave me a Ray Hunt book years ago,” said Todd, “but to be honest, at the time I really didn’t understand it. But over time, I’ve worked with a lot of horses, watched a lot of other horsemen, and have taken in a few clinics along the way, including two with Buck Brannaman. I learned a lot from him.”

While Todd wasn’t at the sale to demonstrate his prowess as a horseman, observers with an attentive eye could’ve learned a thing or two from him about lightness, patience and cowboying up, and at the end of the day, the lesson wouldn’t have cost them a dime.