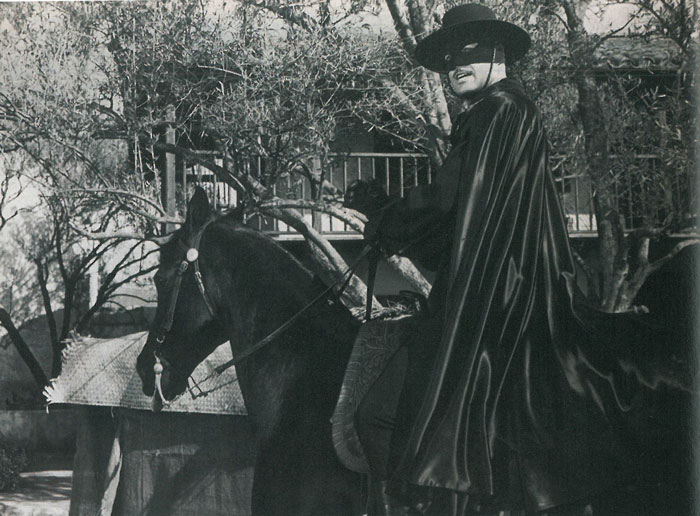 No records of his years of competitive showing could be found with AQHA, perhaps because he probably was shown in open events not sanctioned by the AQHA in those years. “But he was a wonderful reining horse,” commented Randall. 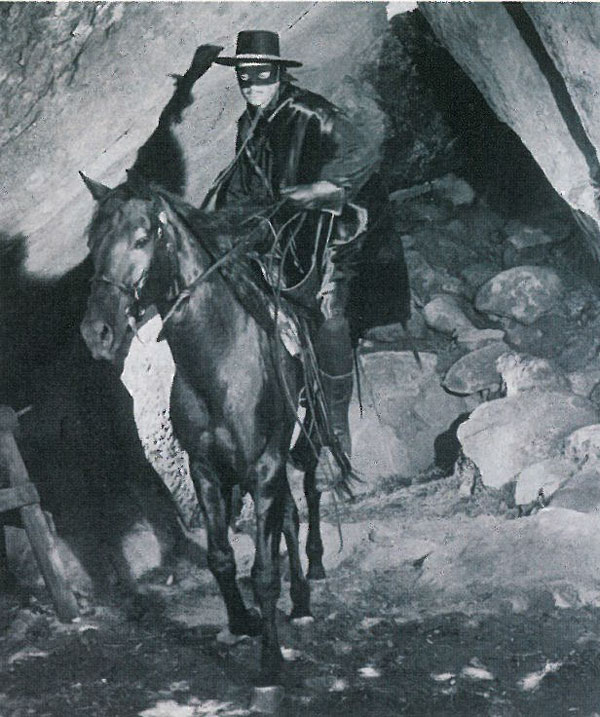 When both were dressed as Zorro, it was difficult to tell Guy Williams and Buddy Van Horn apart. This is Buddy in “The Secret Passage.”Buddy Van Horn, who at the time worked as Guy Williams’ stunt double, said that Diamond Decorator was a well-trained, competitive stock horse. “If you touched him with your knee, he was ready to go. He really liked to move.”

Diamond Decorator had his own doubles. Among them were Midnight, another registered Quarter Horse; Rex, an American Saddlebred owned by Glenn Randall Sr.; and Ribbon, a grade horse. Each lent his own special talents and strengths to the dashing El Zorro.

The horses were so close in looks the average viewer could not tell which horse was which. “In pictures I cannot tell, especially Diamond Decorator and Midnight,” states Randall To keep the horses as uniform in color as possible, “Miss Clairol” was employed.

Buddy Van Horn, stunt double for Guy Williams, on Bracket, a large sorrel who was dyed for the scene from “An Affair of Honor.”

The horses each had special strengths and talents, all of which were called on regularly. According to Randall, it was Midnight who retrieved a bucket of water for Sgt. Garcia (Henry Calvin) in the series when the sergeant had captured Zorro’s horse. 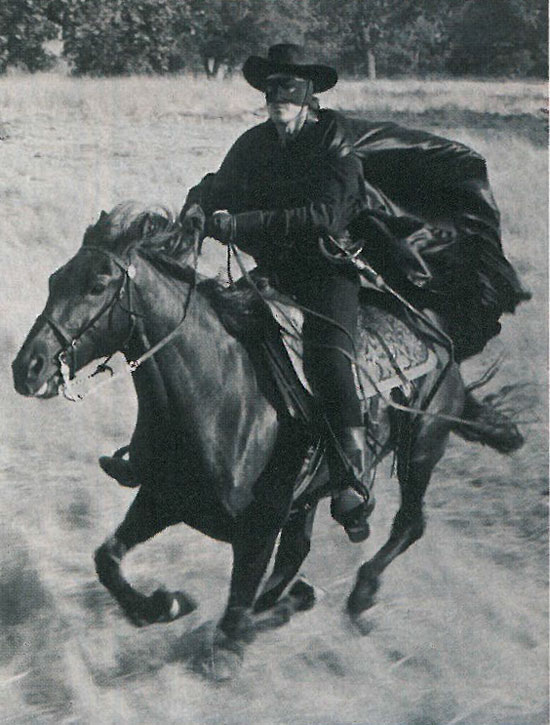 Seen here as Zorro and riding Ribbon, his favorite “Tornado,” Buddy Van Horn remembers Walt Disney as a man with a passion for horses.Van Horn’s favorite Tornado was Ribbon. “He could do transfers, and he could run.” Laughing, Van Horn added, “I could about outrun a camera car with him. They really had to hustle to keep up.”

King was seen in many movies and series, including Spin and Marty as the fabled Dynamite. Rex was Leslie Nielson’s mount in his role as Francis Marion in Swamp Fox and also appeared in many other movies. Diamond Decorator, however, was used only as Tornado in the Zorro series.

After the series ended, Disney retired the black to the Disney owned Golden Oak Ranch near Newhall, Calif., where many scenes of Zorro had been filmed. Diamond Decorator never again appeared in movies or a series. He had done his work, he had done it well, and he was rewarded with a long, quiet life.

As for the relationship between Guy Williams and Diamond Decorator, according to Randall, there was a clear sense of trust between the two. “He was obviously Guy’s favorite mount.”

Nor did the friendship between the horse and rider end when the final scene was shot. “I remember Dad telling me he was going out there,” commented the late actor’s son, Guy Williams Jr. Long after the series ceased, Guy Williams Sr. drove to the Golden Oak Ranch to spend time with his equine friend and former co-star.

Although Walt Disney’s Zorro originally aired for only two seasons, beginning in 1957 and ending in 1959 due to a dispute with ABC, the Disney cable channel now airs the classic series nightly. Although the Zorro horses are long gone now, the echoes of their hoofbeats still ring out today. With their dashing human counterpart, they continue to capture new young fans while still holding captive older fans, who breathlessly watched the series in their youths.

The author, a native Californian, received her first pony for her sixth birthday and wrote that her favorite place to shop was Oakdale Feed and Seed. After 18 years in the broadcast industry, she is now a Napa Valley stay-at-home mom, writer, and emerging equine artist.